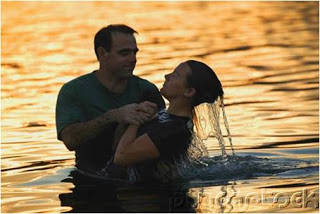 “In my church tradition, baptism is considered the normative occasion of justification, but not the cause of justification.  Does this view differ substantially from baptismal generation as understood by the Orthodox?”

Thank you for your interesting question about baptism as a “normative occasion” versus it being a cause of justification.

The first thing that struck me about your question is that it is narrowly focused on justification rather being more broadly focused on salvation.  A lot depends on how we understand salvation and how justification relates to salvation in Christ.  Where Roman Catholicism and Protestantism tend to understand salvation as consisting of the forgiveness of sins (legal justification), Orthodoxy has a much broader understanding of salvation.  For us salvation goes beyond the forgiveness of sins to include enlightenment, release from Satan’s rule, receiving the gift of the Holy Spirit, becoming part of the people of God, joining in the heavenly worship, the resurrection of the body, and being joined to Christ the Son of God.  Furthermore, baptism in Orthodoxy does not stand alone but is normally part of a sequence of services and sacraments.  Baptism in Orthodoxy is preceded by the rite of exorcism in which one renounces Satan; baptism is followed by the sacrament of Chrismation in which one is sealed with the Holy Spirit, followed by sacrament of the Eucharist.  I understand that in Roman Catholicism and in much of Protestantism baptism is a standalone ritual but for Orthodoxy baptism is part of a rich tapestry of the Church’s liturgical life. 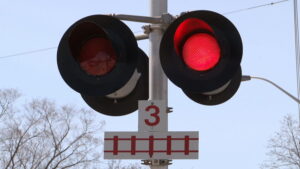 So when you asked if baptism was the normative occasion of justification or the cause of justification a little red light started flashing in my head.  The question seems to frame baptism in terms of the forgiveness of sins and nothing else.  It seems to frame the problem in terms of our having broken God’s law and our standing before God the Judge who will sentence us to hell unless satisfaction is paid.  Behind this is a concern for the minimal requirements for the forgiveness of sins.  You wrote to me privately that according to Roman Catholicism baptism is valid even for children whose parents are of another faith and unaware of the baptism.  I’m not an expert on Roman Catholic theology or canon law, but I can tell you that this cannot happen in Orthodoxy.

In Orthodoxy a child is brought into the Orthodox Church through his/her parents and their godparents. Baptism is a social act; it is not a mechanistic ritual.  In Judaism a boy is circumcised on the eighth day and is then made part of the Jewish faith.  The assumption is that he will be brought up in the Jewish faith and when he is of age he will make his own choice to keep the Jewish Torah.  Similarly, in Orthodoxy the assumption is that the child will be brought up in the Orthodox Faith and when he or she is of age they will make their own choice.  Some will continue on in the Orthodox Faith while others sadly will cease to be active in the Faith or even abandon it.  In Orthodoxy there is no “once saved, always saved.”  Orthodoxy believes that it is possible to lose one’s salvation.  Orthodoxy does not reduce justification by faith to one particular moment but sees it as a process whereby one puts one’s faith in Christ day by day, moment by moment until the end of life.  In Orthodoxy just as important as faith in Christ is faithfulness to Christ even to the point of martyrdom. 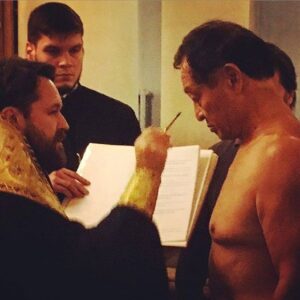 If you want to understand how Orthodoxy understands the connection between baptism and justification (remission of sins), the best thing to do is read the text for the sacrament of baptism.  One thing you will note as you read the text below is the language of spiritual warfare.  This reflects a theology older than the legalism of Medieval Catholicism.

Let all adverse powers be crushed beneath the sign of the image of thy cross.  (Thrice.)

We pray thee, O God, that every aerial and obscure phantom may withdraw itself from us; and that no demon of darkness may conceal himself in this water; and that no evil spirit which instilleth darkening of intentions and rebelliousness of thought may descend into it with him (her) who is about to be baptized.

But do thou, O Master of all, show this water to be the water of redemption, the water of sanctification, the purification of flesh and spirit, the loosing of bonds, the remission of sin, the illumination of the soul, the laver of regeneration, the renewal of the Spirit, the gift of adoption to sonship, the garment of incorruption, the fountain of life.  For thou hast said, O Lord: Wash ye, be ye clean; put away evil things from your souls.  Thou hast bestowed upon from on a high a new birth through water and the Spirit.  Wherefore, O Lord, manifest thyself in this water, and grant that he (she) who is baptized therein may be transformed; that he (she) may put away from him (her) the old man, which is corrupt through the lusts of the flesh, and that he (she) may be clothed upon with the new man, and renewed after the image of him who created him (her): that being buried, after the pattern of thy death, in baptism, he (she) may, in like manner be a partaker of thy Resurrection; and having preserved the gift of thy Holy Spirit, and increased the measure of grace committed unto him (her), he (she) may receive the prize of his (her) high calling, and be numbered with the first-born whose names are written in heaven, in thee, our God and Lord, Jesus Christ.  (Service Book of the Holy Orthodox-Catholic Apostolic Church translated by Isabel Florence Hapgood; emphasis added)

I’ve quoted just one passage in the service of Baptism.  There are other lengthy prayers as well.  The point here is that the Orthodox understanding of the purpose of baptism much richer than the Protestant understanding.

Your question whether baptism is the cause of justification makes me uneasy.  Bottom line, Jesus Christ is the ultimate cause of our justification and our reconciliation with God the Father.  This speculative approach or concern with the causal mechanism of salvation is alien to the New Testament and the patristic consensus; it reflects the thinking of Medieval Western Christianity.  In Orthodoxy the sacraments are often referred to as “Mysteries.” Faith in Christ entails a personal relationship with Christ, that is, one accepts Jesus as Lord and Savior, one commits oneself to living according to the teachings of Christ.   The Orthodox approach to salvation is relational and organic.  Fundamentally, salvation consists of being united to Jesus Christ and following Christ in the context of life in the Church, the Body of Christ.

Baptism can be understood as a covenant ritual in which one enters into a covenant relationship with the Suzerain (Lord).  This is the significance of the questions asked:

Dost thou believe in him?

I believe in him as King and as God.

In other words justification from the Orthodox point of view does not result from certain ritual action or by mentally assenting to a certain doctrine about Christ’s death on the Cross, but from a personal commitment to Christ.  When we are baptized we are joined to Christ much like an unemployed man when hired is no longer an independent agent but now part of a huge corporation and accountable to the Owner.

So the answer to your question is really both.  When we are baptized we cease to be autonomous individuals or renegades, but are now newly enlisted soldiers in Christ’s army.  So in that sense the enlistment becomes the causal mechanism by which he is brought into the army.  So when the soldier takes an oath to serve in the King’s army that oath taking becomes a “normative occasion.”

To use a different analogy, is the wedding the cause of marriage or the normative occasion of marriage?  The answer is both/and.  But if one wishes to be legally and technically precise the answer in the State of Hawaii is the moment both parties sign the marriage certificate.

To sum up, baptism is both the “normative occasion” and “cause” of our salvation in Christ (which includes justification—the remission of sins).  This is because in baptism we are joined to Jesus Christ the Savior of the World.  Ultimately, it is Jesus who is the cause of our salvation.  Jesus saves us by his Incarnation, his death on the Cross, his descent into Hades, his third day Resurrection, his Ascension into heaven, and his sending the Holy Spirit on Pentecost.  Justification (forgiveness of sins) is just one aspect of our salvation in Christ.  The forensic focus of your question is quite understandable in light of your church tradition (Church of God, Stone-Campbell Restoration Movement) which has roots in the Protestant tradition.  This goes a long way to explaining why your church’s understanding of baptism diverges significantly from the Orthodox Church’s understanding of baptism even though both have much in common.