The Dark Side of the First Christmas 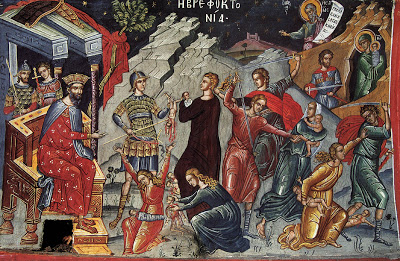 Slaughter of the Holy Innocents

Normally, the Christmas season is viewed as a time of holiday cheer. Of twinkling lights, fragrant pine trees, peppermint candy canes, eggnog drinks, gingerbread cookies, happy songs in the air as people go shopping for gifts, and the smiling children eagerly anticipating opening their presents. But for many the year 2015 has been a year filled with tragedy and loss. A sense of darkness and mourning hangs heavy in the air as we draw near to Christmas Day. We learn of terrorist attacks abroad, mass shootings at home, gruesome beheadings, children kidnapped by terrorists, thousands fleeing from Syria attempting to gain entry into Europe, and Christianity being eradicated in the Middle East. How then should Christians approach Christmas, a time normally filled with holiday cheer?

We can reflect on the dark side of the first Christmas. This is an aspect of Scripture that is often skipped over by pastors in the Christmas sermons. However, a close reading of Matthew and Luke’s accounts of the birth of Jesus Christ yields unexpected parallels with today’s harsh reality. 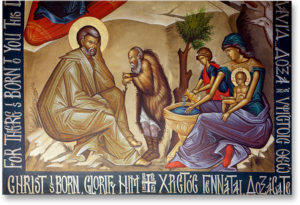 Mary’s unexpected pregnancy was a scandal and almost brought about her divorce. Joseph wanted to divorce her quietly until God sent an angel to him in a dream. Being a righteous man and of great faith Joseph took Mary as his wife (literally “woman”) and took care of Jesus.  (See Matthew 1:18-25) In the Orthodox Hours of the Nativity is a passage that captures Joseph’s confusion and outrage over Mary’s inexplicable pregnancy:

Thus saith Joseph to the Virgin, What is this thing, O Mary, that I behold in thee.  Verily, I am surprised and perplexed, and my mind is dazzled. Wherefore, henceforth from this moment be thou secluded in secret. What is this matter, O Mary, that I behold in thee? For thou hast given me instead of honour, disgrace; and instead of gladness, sorrow; and instead of being extolled, thou hast brought me blame. Therefore, I cannot bear the reproach of men, from the Temple of the Lord I took thee; from the priests I received thee as innocent of all blame.  What then is this thing I behold?

One cannot help but be startled by the blunt language used by Joseph.  Following this hymn is a response from the Old Testament Scripture:

The Lord hath said to me: Thou art my Son, this day have I begotten thee.  Ask of me and I will give thee the Gentiles for thine inheritance. (Hours of the Nativity, Nassar p. 375)

For Joseph the miracle of the Incarnation almost caused him to stumble, but his willingness to trust in God resulted in his becoming a saint.

Palestine was under the heavy hand of big government in the form of the Roman imperium. Thus, Jesus was born into occupation territory and enjoyed none of the political privileges like that enjoyed by a Roman citizen. A government census forced Joseph and Mary to leave their home in Nazareth and travel all the way to Joseph’s ancestral home in Bethlehem (Luke 2:1-2).  One can imagine the upheaval of large number of peoples traversing the land to register with government authorities; Joseph and Mary in the late stages of pregnancy waiting in long lines to meet with government officials. The census was not for the benefit of the people.  Ancient rulers relied on census for taxation purposes.

Palestine at the time was under the rule of Herod, a “client” king of the Romans (Barnett p. 72). Herod’s basis for rule was tenuous. Although a “local” ruler, his ancestry traced back to the Idumaeans, the descendants of the Edomites. Because he could not claim descent from David’s line his claim to the throne was vulnerable to counter claims. In recognition for Herod being a valuable ally to the Romans, the Roman senate gave him the title “king of the Jews.” So it is no little surprise that when the Magi showed up asking: “Where is the one who has been born king of the Jews? We saw his star in the east and have come to worship him” (Matthew 2:2) that Herod’s usual paranoia would ratchet up considerably. First, he resorted to guile hoping to use the Magi as scouts to locate the Christ child. Then when he found himself thwarted he went on a murderous rampage ordering the slaughter of all boys two years and under in and around Bethlehem (Matthew 2:16). 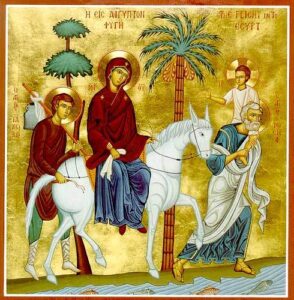 Holy Family in Flight: Joseph Carrying Jesus, Mary on the horse, and James the Brother of the Lord.  Source

Jesus was a political refugee. Joseph was warned in a dream to take the Child and his mother and to escape to Egypt (Matthew 2:13-14). Most likely, Jesus spent his infancy in Alexandria where there was large population of Jews (Barnett p. 100). After a few years of relative safety Joseph sought to return to Judea but fearing the new ruler Archelaus took his family further north to Galilee. In AD 6 the Romans in response to complaints against Archelaus annexed Judea bringing the heartland of Judaism under direct Roman rule. Direct Roman rule would bring the horrific capital punishment crucifixion and a string of procurators including Pontius Pilate who would one day order the crucifixion of the Christ Child. 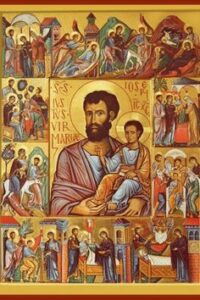 Often overlooked in the Christmas story is Joseph the Betrothed. What is striking about him is not the angel speaking to him in dreams but his decency and his steadfast courage in the face of danger. He took Mary as his wife. He led his family into exile. He gave Jesus a family life and taught Jesus his trade, carpentry. Common decency goes a long way and becomes all the more valuable in times of upheaval and turmoil.

Thus, the first Christmas was a montage of the angels appearing to shepherds in the field, the Magi paying homage to the Christ child, and the grief stricken mothers of boys slain by Herod’s soldiers. Jesus was born in dark times, into a time of upheavals and mass murders. The humility of Jesus’ birth can be seen in its obscurity. There was no welcoming celebration in anticipation of his birth but rather Herod’s menacing paranoia and stealth on the part of his parents. Isaiah’s prophecy hints at the darkness and the suffering of the times Jesus was born into:

The people living in darkness

Have seen a great light;

On those living in the land of the shadow of death

A light has dawned.

Another Old Testament prophecy, one by Jeremiah, anticipated Herod’s slaughter of infant boys in order to prevent the birth of Christ. 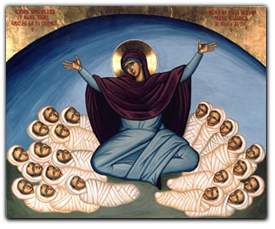 A voice is heard in Ramah,

Rachel weeping for her children

And refusing to be comforted

Because they are no more.

The Virgin Mary Grieving Over Her Son

Herod’s killing of the infant boys was a replay of Exodus 1 where Pharaoh ordered the killing of Jewish boys in order to preserve his hold on the throne.  Just as Pharaoh sought to kill Moses, who would deliver the Israelites, so Herod would seek to kill Jesus, the Second Moses who would deliver all humanity. Rachel’s unceasing lament foreshadows the Virgin Mary’s grief on seeing her own son hanging on the cross.

A few days after Christmas, on December 29, the Orthodox Church remembers the deaths of the Holy Innocents.

As divine first-fruits and newborn lambs,

You were offered to Christ who was born as a child, holy innocents.

Now we beseech you:

“Unceasingly pray for our souls.”

Beyond the usual holiday cheer lies the dark side of Christmas, but beyond that lies the promise of Christ’s resurrection. Let us remember that Christ was born to save us from our sins and from Satan’s rule. Mourning and grief are very much part of the Christmas celebration. Orthodox Christians observe the forty days Nativity Fast to prepare spiritually for the birth of Christ. The Christmas Matins service anticipates the themes of darkness, sin, and Christ’s victory.

Grant forgiveness, O Christ, to us who have been in the darkness of our deeds of error since the night, who eagerly praise thee, since thou art our Benefactor; that thou mayest hasten to us and preapre for us a good way, wherein if we walk we shall find glory and honour.

Verily, Jonah when he was in the depth of the sea, begged to ascend to thee and to be rescued from the tempest.  But as for me, having been pierced by the arrows of the tyrant, in thee I seek refuge, O evil-destroying Christ.  Hasten thou to me and deliver me hastily from my negligence.  (Christmas Matins, Nassar p. 405)

The Christmas services teach us that in times of darkness God is at work bringing about our salvation.

Given this “darkness” to so many both now and in history, it is a good lesson for us to take in. How often we mis-read our trials and sufferings! The Church, over the centuries has learned to view the events of Christ’s birth in a far broader and more monumental context — the Incarnation of the 2nd person of the Godhead to redeem a lost and darkened humanity. God has become flesh and dwelt among us! God is with us in our afflictions.  So evil murderous rulers, political refugees, grieving mothers, brave fathers are all part of the Christmas story.  They represent the dark side of Christmas often overlooked.  Let us remember that our suffering and the sufferings of the world are among those “light affliction” which God even now might be working for great and unimagined Glory.

Christ is Born! Glorify Him!

Orthodox Church in America.  “Apostle James, the Brother of the Lord.”

Orthodox Church in America. “14,000 infants (the Holy Infants) slain by Herod at Bethlehem.”

Pravoslavie. “The Holy Infants of Bethlehem.”