Evangelicals and Orthodox in Conversation 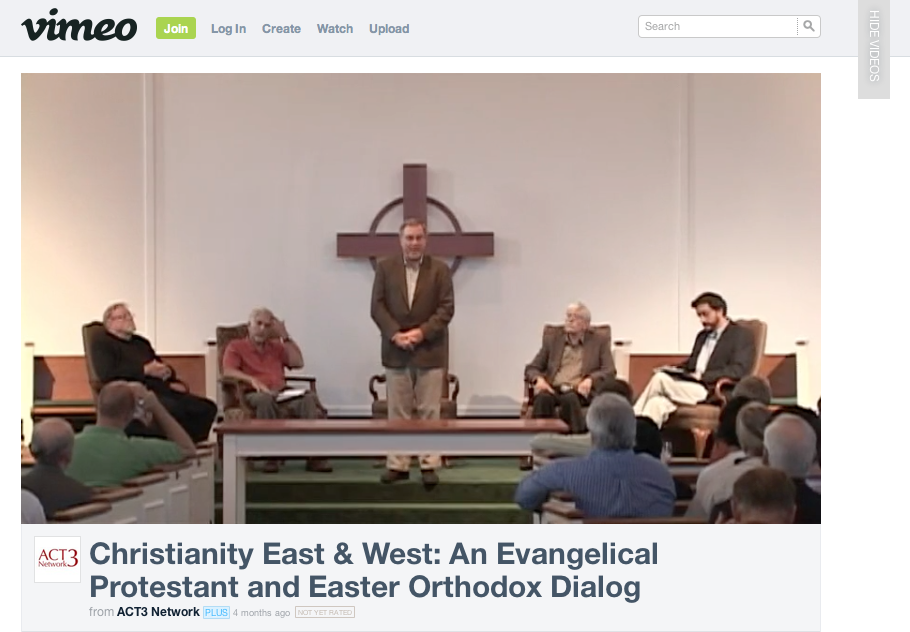 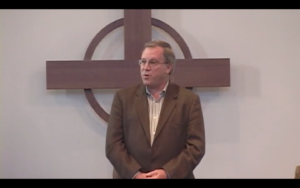 Pastor John Armstrong has made it his mission to foster unity and understanding among Christians from different traditions.  To that end he organized a conversation between Evangelicals and Orthodox Christians in a forum in September 2008.

He invited two Orthodox Christians: Bradley Nassif and Fr. Patrick Reardon, and two Evangelicals: Grant Osborne and George Kalantzis.  Fr. Wilbur Ellsworth, a former Baptist pastor who converted to Orthodoxy, opened up the conversation with a brief word of introduction and a prayer.

Two things should be noted about the video.  One, the conversation took place in 2008 but was only recently uploaded onto the Internet.  Two, the video is quite long – almost two hours.  The length of the dialogue allows for better understanding between the two traditions.  The length also means that it would be good if some markers were provided some readers who do not have the time to listen to the entire conversation.

To aid the busy reader who does not have the time to listen to the entire 2 hour conversation I have excerpted some of the more memorable points made in the conversation and noted the minute and second the statement was made.  All the reader needs to do is place the cursor on the sliding bar at the bottom to hear that particular excerpt.

The courteous and charitable spirit in which the conversation across faith traditions was done makes it worth the listen.  It will be informative for Evangelicals who wish to learn more about Orthodoxy and for Orthodox Christians who are not familiar with Evangelicalism.

At the outset John Armstrong, the moderator, noted that he is convinced that Christians don’t know each other very well (1:32).  He notes that the dialog was not an effort at “profound ecumenicism” (2:55) but more of an attempt at informal or grassroots ecumenicism (3:50). 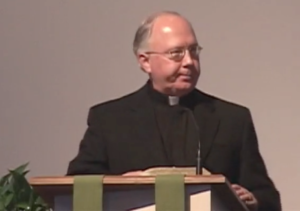 7:37 Fr. Wilbur Ellsworth posed the question: “Can Evangelicals and Eastern Orthodox be friends?  Should they be friends?”  Fr. Wilbur recounts how he and Pastor John Armstrong remained friends even when they moved in different theological directions. 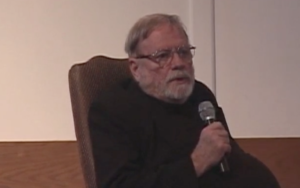 17:40 Pastor John Armstrong introduces Fr. Patrick Reardon of All Saints Orthodox Church, Chicago.  Fr. Patrick recounts: “When John asked me to be part of this panel on East and West, I asked: ‘Which side do you want me to represent?’ . . . .  ‘I’m astounded that I’m considered Eastern.’” (18:20)

Fr. Patrick described his journey to Orthodoxy: “The decision to go ‘East’ was made in order to be part of the Seven Ecumenical Councils.” (20:25) 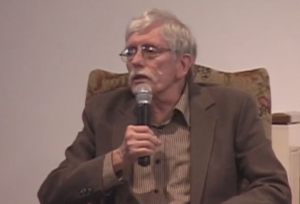 22:00 Prof. Grant Osborne, professor at Trinity Evangelical School, after being introduced notes: “We need to foster these dialogues because we have so much to teach each other.” (24:25) 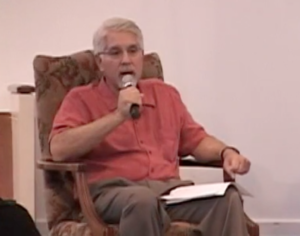 24:40 Prof. Bradley Nassif, professor at North Park Seminary, in his self introduction notes: “I was one of those people who grew up religious but lost.  I grew up religious but I didn’t know Christ as my Savior.”  At the age of 12 he heard Billy Graham preach on television.  At the age of 17 he came to “an experiential relationship with Jesus Christ (27:16), “not head knowledge, but real resurrection knowledge.” “From then on I wanted to know more about these Evangelicals.” 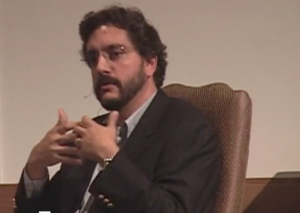 29:58 Pastor John Armstrong introduces Prof. George Kalantzis, Wheaton College professor and a “cradle Evangelical” who grew up in Orthodox Greece.  Kalantzis clarified that his family church group, the Greek Evangelical Church (the Evangelical Free Church), came out of Greek Orthodoxy and had no contact with Protestant missionaries (32:40).    (33:20 – 36:0)

37:45 First Question: How does the Trinity shape the way you worship and the way you practice your Christian faith?

43:44 John Armstrong: “Will someone define in the simplest way for the person who heard for the first time the word ‘perichoresis’?”

46:21 Second Question: How do you understand the nature and goal of salvation?

51:25 John Armstrong noted that in the past 25 years a shift has taken place among Evangelicals in the understanding of salvation, especially with respect to N.T. Wright who has sought to understand salvation more broadly than the Western Augustinian tradition.

55:12 Third Question: “What is the place and nature of tradition?”  Bradley Nassif notes that we need to make the distinction between bit “T” tradition and little “t” tradition.

1:05:09 Fr. Patrick Reardon denounced the small “t” tradition example mentioned by George Kalantzis where an elderly Greek lady doing an act of mortification in response to an “answered” prayer noting that what she was doing was in contradiction to Orthodox Tradition.  He elaborated that a good father confessor would say to the lady something along the line of: “Are you out of your cotton picking mind?!!” (1:05:20)

1:07:45 Fourth Question: What role does mystery have in faith and worship?  How does this relate to sacramentalism?

1:08:45 Prof. Grant Osborne: “Ultimately, the mystery at the heart of the universe is the God-human relationship.  The Trinity is the ultimate Mystery.”

1:10:50 Prof. George Kalantzis: “I rejoice seeing a whole new generation of Protestant theologians rebelling against the notion of propositional truth.”

1:10:55 Prof. George Kalantzis noted that many Orthodox Christians in Greece did not understand the meaning of the church iconography and that it fell on him a Protestant to explain to his fellow schoolmates the biblical meaning of the icons.  He also described his concern about Orthodox Christians putting their faith more in icons than in God.  Fr. Patrick Reardon’s response was that in the twenty years that he had been an Orthodox priest he had never seen anything like what George Kalantzis described, and concludes: “I think that’s Greece.”

1:20:45 Question from the audience: “Please respond: Romans 5:12 has been cited; why did Augustine view salvation from the standpoint of guilt and punishment, and not death?  And why have Western theologians perpetuated this understanding?”

1:25:55 Question from the audience: “To the brothers from the East, what constitutes for you the worship of icon and the veneration of icon?”

1:28:35 Question from the audience: “What is the Evangelical understanding of the holy saints and their ability to intercede on our behalf?  And their role in our present spiritual life?”

1:37:08 Question for George Kalantzis: “Are the abuses and disturbing practices in Orthodoxy due primarily to the worship and theology of Orthodoxy that is part of Orthodox tradition or to the failures of us who are sinners in the Orthodox Church?”

1:40:10 Closing Statements: Pastor John Armstrong gives each of the participants the opportunity to make a closing statement. 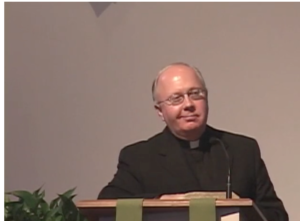 Fr. Wilber Ellsworth — There is the reality that we are to love one another as those who have been made in the image of God.

We can love one another as friends, as brothers and sisters in Christ.  And so it is good to be together with Christians, [from] both East and West. 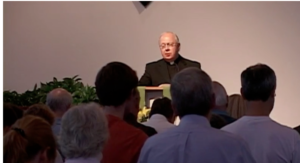 The above video represents the tip of the iceberg.  There has already been a number of conversations between Evangelicals and Orthodox Christians.  The list below presents the writings or videos of the various participants in which they attempt to interact with each other.

Craig Blaisding — “A Response to Eastern Orthodoxy.”  The Gospel Coalition. 2012.  (A response to Fr. Wilbur Ellsworth.)

Bradley Nassif – “Will the 21st be the Orthodox Century?” Christianity Today 4 January 2007.

Grant R. Osborne – “The Many and the One: The Interface Between Orthodox and Evangelical Protestant Hermeneutics.”  OrthodoxyToday.org.