An Early Christian Prayer to Mary 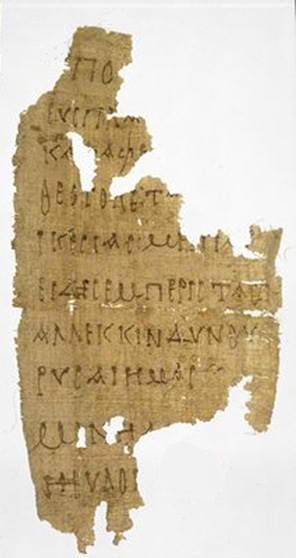 Many Reformed Christians like Orthodox Christians hold the Virgin Mary in high regard.  That many Reformed Christians are even willing to call her “Theotokos” is not surprising in light of the fact that the Reformed tradition accepts the first four Ecumenical Councils: Nicea (325), Constantinople (381), Ephesus (431), and (Chalcedon 451) (See the Second Helvetic Confession Chapter 11).  It was at the Third Ecumenical Council (431) that Mary’s title as the “Theotokos” was formally affirmed to be a dogma of the Church: “If any one refuses to confess that the Emmanuel is in truth God, and therefore that the holy Virgin is Mother of God (θεοτόκος), for she gave birth after a fleshly manner to the Word of God made flesh; let him be anathema.” (See NPNF Series 2 Vol. XIV p. 206)  Recently, some Reformed groups are rediscovering the early Church and selectively including more and more early Church practices in their Sunday worship.

Where they differ from the Orthodox Church is over the propriety of addressing one’s prayers to Mary.  Being guided by the principle of Solus Christus – that salvation is through Christ alone and that Christ is the sole mediator between man and God, Protestantism frowns on Christians praying to the Virgin Mary or the saints.  They confuse Mary’s role as a chief intercessor by mistakenly thinking our Blessed Theotokos to be a deity! Sadly, many Protestants wrongly believe with little evidence and even less serious study that Christianity became corrupted and encrusted by non-biblical beliefs around the time of Emperor Constantine in the early 300s, if not earlier.  However, this hypothesis has been discredited by the growing evidence that early Christians prayed to the Virgin Mary prior to Constantine.  Papyrus 470 which dates back to 250 can thus be considered an example of a very early extra-biblical tradition.

In 1917, the John Rylands Library acquired a collection of papyri.  Many Protestant pastors who took New Testament Greek and exegesis are likely to have heard in passing Rylands Papyrus P52 dating as early as 117 to 138 and considered to be the oldest extant record of the canonical New Testament.  During this early period were other early Christian writings like the Didache, Clement’s first Epistle to the Corinthians, and Ignatius of Antioch’s letters.  It is important to keep in mind that many if not most of the first generation of the Apostles’ disciples were still alive and leading the Church during the time of these early writings.  These disciples of the Apostles devoted themselves to preserving and passing on the Apostles’ teachings.  As we have noted several times before, the Protestant notion of the Holy Spirit “Blinking-Off” in the Church soon after the Apostles died then “Blinking On” with the Reformation is problematic both historically and theologically.  Orthodoxy rejects this Protestant approach to history and upholds Pentecost as a continuous ongoing reality, that is, the Holy Spirit was present in the early Church teaching and guiding the Church into all Truth, as Christ promised (John 16:13.  The Rylands collection contains P470 which contains a prayer to the Virgin Mary dating as early as 250.  The date 250 is significant in light of the fact this was the time of the Decian Persecution and thus predates Constantine’s Edict of Milan issued in 313.  This early prayer to Mary arose from the vibrant spirituality of the early Church.

Papyrus 470 predates the Council of Ephesus (431) by two centuries.  This is the Third Ecumenical Council that was convened for the purpose of addressing the Nestorian controversy – Nestorius’ refusal to address Mary as “Theotokos” in the Liturgy.  In other words a high view of Mary was held by Christians early on and was not the result of late development of tradition as some might claim but rooted in an ancient Christian tradition.  Furthermore, the term “Theotokos” was not coined at the Council of Ephesus but was already in use for some time by early Christians.

As we read the text of this short prayer – 22 words in the original Greek – we find a number of significant ideas.  One aspect is the titles given to Mary:

This was not an individual prayer but a corporate prayer – the early Christians prayed to Mary in their Sunday worship!  This prayer was translated into Latin and in the Latin tradition came to be known as “Sub Tuum Praesidium.”  In the Orthodox tradition this prayer is sung during the Vespers service for Great Lent and is echoed in similar prayers in the daily prayers and the Sunday Liturgy.  This points to the universality of this ancient prayer.  In light of the Vincentian Canon – that which is believed everywhere, always, and by all — prayer to Mary the Theotokos is a catholic or universal Christian practice.

We learn from this papyrus that when early Christians gathered for worship they addressed Mary by the title “God Bearer” recognizing her role in the mystery of the Incarnation – Christ coming down from heaven and assuming human flesh for our salvation.   Further, we learn that early Christians believed in praying to the saints and asking the saints to pray on their behalf.  In contrast Mary is all but ignored in Protestant worship services today; she is never addressed as “Theotokos;” and she is not asked to pray for us.  It is as if Mary is taken out for display during Christmas and then the rest of the year is put away in a box until next year.  An early Christian visiting contemporary Protestant worship services would likely be disconcerted if not dismayed by how little attention Christ’s Mother is given by Protestants today.

As archaeological evidence Rylands Papyrus 470 suggests that Protestantism, especially the Reformed tradition and Evangelicalism, may have thrown the baby out with the bathwater.  Protestants can enrich their worship and devotional life by learning from the early Church by emulating their respect for Mary the Theotokos.  A good first step is to refer to Mary not just as “Mary” but also as “Theotokos” or in English “Mother of God” or “God Bearer.”

The occasion of Protestantism’s High Holy Day: “Mother’s Day” (May 10 in 2015) would be a good opportunity for Protestant pastors and their parishioners to call Mary by her proper title “Theotokos.”  Doing this on this upcoming Sunday morning would mark one positive step towards recovering historic Christian worship.  A good follow up would be to print this ancient prayer in the church bulletin and let people be free to use this prayer to the extent they feel comfortable using it.  Reformed and Evangelical Christians can ask Mary to be their prayer partner asking God’s blessing for their earthly mothers.

Another good follow-up would be to visit an Orthodox worship service to learn how they honor Mary the Theotokos in the ancient Liturgy that dates back to the early Church and how Mary sets an example of Christian discipleship through her total commitment to Jesus Christ.

do not despise our petitions in time of trouble:

but rescue us from dangers

only pure, only blessed one.  [Source]

Fr. Wilbur Ellsworth.  2010.  “The Christian Reformed – Who Are They?” Ancient Faith Radio.