The Light of the Resurrection Shines in the Darkness

There is a story told about Nikolai Bukharin, a Russian Communist leader who actively propagated the message of atheism.

One of the most powerful men in the world was Nikolai Ivanovich Bukharin, a Russian Communist leader, who took part in the Bolshevik Revolution in 1917. In 1930 he addressed a massive assembly of workers in Kiev on the subject of atheism. He aimed the heavy artillery of his arguments at Christianity by hurling insults and proof against it. He went on and on for an hour effectively crucifying and killing our faith. When he was done he looked out smugly upon what he thought was the smoldering ash heap of the crowd’s faith. His speech was followed by silence and he demanded, “Are there any questions?” As deafening silence filled the auditorium, for what seemed an eternity, a man approached the platform and the lectern standing near the powerful communist leader. He surveyed the crowd scanning the silent faces from left to right. Finally, he shouted the ancient greeting known so well in the Orthodox Church: “CHRIST IS RISEN!” En masse, the crowd rose to its feet and the response came crashing forth like the sound of thunder: “INDEED, HE IS RISEN.”  Source

Some question whether this event actually happened but it is a matter of record that during the Soviet era thousands of churches were destroyed and tens of thousands of priests and monks were imprisoned.  It is no small miracle that the Orthodox Church in Russia has survived, outlasted Communist rule, and is currently thriving.  It is a fulfillment of Christ’s promise to the Apostles: “On this rock I will build my church and the gates of hell shall not prevail against it.” (Matthew 16:18; OSB)  Let us remember that the power of Christ’s third day resurrection was more than a onetime event but continues to reverberate through human history. 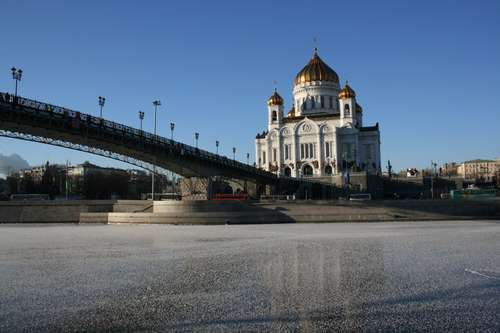