Luther Invoking Sola Scriptura at the Diet of Wurms

Father Andrew Stephen Damick recently wrote: Protestants and a Churchless Tradition: “Sola” vs. “Solo” Scriptura.  It’s an excellent article and I encourage readers to read the entire article.  In this article I have excerpted parts of Father Andrew’s article and used it as a basis my take on what is happening with the recent rediscovery of historic sola scriptura by Evangelicals. 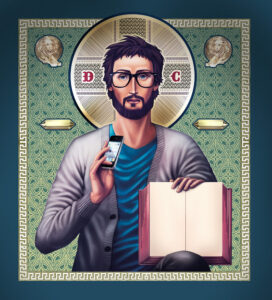 Charismatics are celebrating Lent. Baptists are talking about the Eucharist. The inscrutable maybe-universalist and now Oprah-darling Rob Bell is even using the phrase the tradition. Maybe this tradition stuff isn’t so bad. I can branch out a little. I can line up some Athanasius next to my MacArthur, and a volume or two of Gregory of Nyssa next to my Bonhoeffer. Osteen still goes somewhere preferable near the bottom. (Who gave me that book, anyway?) Maybe we’ll put Origen down there with him. Both are questionable, right? Oh, hey, I’ve heard Ratzinger is kind of interesting. And that “wounded healer” Nouwen guy’s onto something. Has anyone heard of someone named “Schmemann”?

Welcome to the club, the Lutherans and certain Reformed types say. We’ve been waiting for you. Help yourself to some creeds. We hope you’ll stay for some liturgy.

And we hope you’ve discovered the difference between sola and solo scriptura.

Most Evangelicals grew up on what Keith Mathison calls solo scriptura.  They were taught that all that is needed is the Bible – no external authority or assistance is needed for understanding Scripture.  (See my review of Keith Mathison’s The Shape of Sola Scripture.) This approach can be traced to Alexander Campbell, an American revivalist who lived in the early 1800s.  Out of the frontier revivals came the motto: No creed but Christ, no book but the Bible.

In recent years Evangelicals in growing numbers have begun to discover Church history. They are venturing beyond Evangelicalism’s provincial sub-culture to explore the broad and diverse Christian traditions: historic Protestant Reformation, early Christianity, mysticism, Roman Catholicism, and Orthodoxy.  They soon discover that the original Protestant Reformers were not afraid to use creeds or to cite the early church fathers and that the Bible only slogan they grew up on is different from what Luther and Calvin taught.  Classical sola scriptura while affirming Scripture as the supreme authority in matters of faith and practice allowed for creeds and the early church fathers.  The original Reformers had a far higher view of the church compared to many Evangelicals today who question whether church membership is necessary to Christian discipleship.

Father Andrew notes that to say sola scriptura involves a communal reading of Scripture leads to important questions about the church.

The Church is there to help. The Church will interpret the Bible together. I don’t have to go it alone.

But what if my church is wrong? What about when my church interprets it in a manner that contradicts the Methodists down the block? Who’s right? Just read the Scripture? But that’s what I’ve been doing!

What is missing here is ecclesiology.

One can say that the Church has authority to interpret Scripture, but which Church? Is it all of them? What about the fact that they don’t all agree? And no, they don’t even all agree on essentials. “Which Church?” is a critical question, and it’s one that isn’t being asked very much in these discussions. Still further, “What is the Church?” is also just as critical, and I fear it’s also gotten lost somewhere. The second question finally leads to the first. If you can figure out what the Church is, then you will realize that not all “churches” are the Church.

If not all churches are the Church, then that means there’s got to be one that is that One. The Bible talks about only one.

I’m overjoyed, of course, that Baptists, Lutherans, Calvinists and others should want to read the Church Fathers, sign onto the ancient creeds, and so forth. This is very good news, and I can only believe that it is likely they will thereby move closer to the faith that I hold as an Orthodox Christian.

This has given rise to a curious kind of ecumenicism.  Some Evangelicals tell me that they too reject sola scriptura (i.e., they reject solo scriptura) and that they too accept church tradition like the Orthodox.  Or they will maintain that classical Protestantism like Orthodoxy allows for creeds, liturgies, and the church fathers.  What is being implied here is that high church Evangelicalism is just as much a part of the one Church as the Orthodox.  However, on closer inspection there are problems here. It becomes increasingly obvious there is a superficiality to the recent Evangelical rush to embrace church tradition.

One thing that stands out about the recent Evangelical embrace of early Christianity and church tradition is how decidedly/overwhelmingly Protestant it all is.   While contemporary Evangelicals can pride themselves for being well read, and more historically informed than their Fundamentalist cousins — they both come from the same Protestant family tree.  Father Andrew writes:

This is finally the problem with Protestants laying claim to elements of Christian tradition while still retaining sola scriptura—it all becomes just “texts,” resources that can be called on or discarded as the individual sees fit for himself. I like it when Basil speaks highly of Scripture but not when Ignatius speaks highly of the bishop. I like it when Athanasius insists on the homoousios but not all that “man becomes god” stuff. I like Chrysostom’s commentaries on Scripture but not Cyprian’s insistence that you cannot have God for your Father without the Church for your mother.

This kind of individualism has never been part of Orthodoxy. To be Orthodox is to accept Holy Tradition and to live under the authority of the bishops the appointed guardians of Tradition.  What we find in the Orthodox Church: the Divine Liturgy, the Seven Ecumenical Councils, the early Church Fathers, the Sacraments, the priestly order, the icons, comprise an integrated package known as Holy Tradition.  These are all the result of the Holy Spirit guiding the Church.

And Holy Tradition is not simply anything one might find lurking somewhere in Christian history.   . . . .   Rather, it is the living reality of Christ in His Church, vivifying the Church by the Holy Spirit. No new dogmas are revealed, because everything was revealed in Christ. There is an ongoing revelation, but it is a revelation of the same things, the same God Who wishes to be known by every person.

This understanding that the Holy Spirit guides the Church is a very crucial point.  Father Andrew notes that for Keith Mathison, God inspires Scripture – but God does not necessarily inspire His Church.  This despite Christ’s promise in Scripture! (see John 14:26, 16:13)  Protestantism’s refusal to believe the Holy Spirit inspires the Church (likely a reaction against Papal authority) resulted in the individualistic interpretation of Scripture: Luther, Calvin, Wesley, one’s pastor, one’s favorite TV preacher or seminary professor giving rise to the current plethora of Protestant denominations.

In the end the differences between Fundamentalism’s solo scriptura and high church Evangelicalism’s sola scriptura are inconsequential.  It is like the difference between the practical, plainly dressed Fundamentalist who likes Hal Lindsey and Charles Stanley and his upscale hip Evangelical cousin who likes Henri Nouwen, G.K. Chesterton, and Alexander Schmemann.  Having descended from the same Protestant family tree they both retain their individualistic autonomy.  Even the Reformed Christian who recently discovers the church fathers and believes in the real presence in the Eucharist do so as a matter of individual choice.  There is not the slightest ecclesiastical consequence for wholesale rejection of the historic Church’s view of bishop rule, the Seven Ecumenical Councils, the Liturgy and Eucharist.  Each denomination (individual?) can have their own unique view of these things.

For Protestants church is a place of fellowship and mutual encouragement, a temporary rest spot before moving on.  Tragically absent in Evangelicalism is the biblical understanding of the Church as “the pillar and foundation of truth.” (1 Timothy 3:15)  Orthodoxy affirms it is the one holy catholic and apostolic Church confessed in the Nicene Creed.  This is something most Evangelicals and Protestants would hesitate to affirm about their particular denomination.  Most Evangelicals have no problem with the notion of an invisible Church, but this leaves them with no concrete authoritative Church here on earth to guide them and provide them safe shelter from heresies. 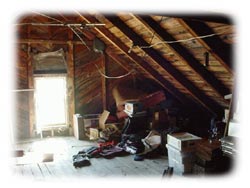 Children in the Attic

Father Andrew closes his article with the wonderful image of tiny rowboats, all bumping up against the great Ark of Salvation, the Church.  Allow me to suggest an alternative word picture.  I am reminded of the scene where a group of children stuck in the house on a rainy day, make their way to the attic.  Opening antique trunks they discover old dresses and clothes their ancestors wore years ago in the old country.  They put on the old clothes and pretend to reenact life in the old days.  The magic of the old days fills the attic for a brief moment on that rainy afternoon, but after awhile they tire of it and go downstairs to resume their “normal” everyday twenty first century life as before.  Before you know it, they will find another new fun hobby.  But for those of us who believe church history is the fulfillment of Christ’s promise in John 16:13 and who believe that ancient Church of yesterday continues in the Orthodox Church today we bid others to cross the Bosphorus with us.  We converted to Orthodoxy not because it’s cool — but because it’s true.

Chris Armstrong.  “The Future Lies in the Past: Why evangelicals are connecting with the early church as they move into the 21st century.”  Christianity Today.  8 February 2008.

Holgrave.  “Hipster liturgists: or, Why I am an Episcopalian.”  Hipster Conservative.  25 August 2014.

Steve Woodworth.  “How Hipsters Became More Powerful than the Gates of Hell.”  The Thursday Circle.  15 August 2013.