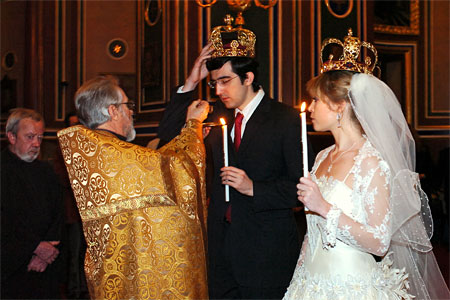 Orthodox wedding – the crowning of the couple

I have received several inquiries about the Orthodox understanding of marriage, especially with respect to “eternal” marriage. I am grateful for Isaiah’s help with this important question. Robert

Is marriage forever? Well, yes… and no.

In penning a few thoughts about the Orthodox understanding of marriage, and how it does and does not carry over into the Kingdom of Heaven, I found the single best source for scriptural and patristic teaching to be a recently-published book by Archpriest Josiah Trenham: Marriage and Virginity According to St. John Chrysostom, especially Chapter Six, “Celestial Bodies and the Union of Souls: Life in the Eschaton.”

St. John Chrysostom (A.D. 347-407), the “Golden Mouth,” is recognized by the Orthodox Church as the foremost of the Fathers of the Church, and its greatest homilist. His preaching and teaching were always pastoral, directly concerned with the salvation of his hearers. Fr. Josiah Trenham has distilled St. John’s teaching on the subject from his many homilies, especially on St. Paul’s teaching on the Resurrection in First Corinthians, as well as Chrysostom’s essay On Virginity, and his Letter to a Young Widow (see bibliography).

To properly understand marriage, one must develop a proper anthropology: What is a human being? St. John’s anthropology was both protological  and eschatological, i.e. it took into account God’s purpose in the creation of man, and His redemptive purpose from our resurrection and restoration in the Kingdom. Chrysostom found and expounded the deep connection between the creation of the world and its resurrection, and a deep Christian conviction of the resurrection of the body in particular. The Transfiguration of Christ (Mt. 17:1-8; Mk. 9:2-8; Lk. 9:28-36) serves as a prefiguring of our resurrection. Chrysostom uses the well-known patristic analogy of a sword thrust into a fire: the iron, while retaining its own properties, is interpenetrated by the heat of the fire. As iron, it cuts; but it also burns like fire. Likewise, in the Transfiguration, Christ’s human nature is shown to be interpenetrated by His divine nature. In His human nature, Christ eats, sleeps, and mourns for Lazarus. In His divine nature, He walks on water and raises the dead.

In Christ’s resurrection, He guarantees and models our resurrection. In understanding the state of resurrected humanity in the Kingdom of God, and how that relates to marriage, it is helpful to think in terms of continuity and discontinuity.

On the one hand, there is an essential continuity between our earthly, mortal bodies, and our bodies after the resurrection, just as there is between Christ’s body before and after His resurrection. The scars from the nails and spear were still visible. The body that died on the cross was the same body that was raised. Our human nature remains human nature, even after the attributes are changed (vs. a strictly Gnostic conception of purely spiritual bodies, with no continuity with the mortal ones).

On the other hand, the risen Christ passed through locked doors on the day of His resurrection. This is the discontinuity side. What is sown perishable is raised imperishable; the mortal puts on immortality. “It is sown a physical body, it is raised a spiritual body” (1 Cor. 15:44). So the goal is “neither escape from the body nor satisfaction of the body, but spiritualization of the body” (Trenham, p. 245, emphasis by the author).

If you have stayed with me so far, here is the application of a biblical anthropology and theology of the resurrection, for marriage: there is continuity and discontinuity.

When the Lord spoke to the Sadducees about marriage in heaven (Mt. 22:23-33), He made it clear that “in the resurrection, they neither marry nor are given in marriage.” That is, the earthly purposes of marriage, to suppress man’s licentiousness and to procreate, are irrelevant in the Kingdom. All the earthly concerns of a married couple: sexual intercourse, birth-giving, possessions, etc., are part of the “form of this world” which is passing away. “They are like the angels in of God heaven” (Mt. 22:30).

But there is one aspect of marriage that is eternal: “Love never ends” (1 Cor. 13:8). St. John Chrysostom reminds us that married Christians are known to be such in the Judgment and in the Kingdom. We will recognize and delight in our spouses and in our children. We will be restored, not to marriage, but to something better, a union of souls, rather than bodies, a union that begins in marriage and reaches a far more sublime condition (cf. Chrysostom’s Letter to a Young Widow).

This is why the Orthodox Church discourages (but does not prohibit) re-marriage after the death of a spouse. A second or third wedding ceremony (no fourth is allowed) has a somewhat penitential character, recognizing human weakness. St. John urged the young widow to whom he wrote to remain faithful to her husband (the title “husband” is used even after his death), in order to keep alive their bond of love, and eventually to be re-united with him. The Orthodox Church forbids re-marriage to widowed clergy, as a way of upholding this ideal.

Till Death Do Us Part?

A couple of notes about the Orthodox wedding ceremony: First, the language of the sacrament does not contain the phrase, ‘Till death us do part. In fact, there are no  vows at all taken by the couple, except to certify that they come to the marriage of their own free will, and have not promised themselves to anyone else. The vows of the Catholic and Protestant West give the marriage a more legal emphasis, rather than the Eastern Church’s emphasis on the blessing of God to effect the union. Second, the climax of an Orthodox wedding ceremony is the crowning, when crowns are placed upon the heads of the bride and groom, signifying the formation of a little outpost of the Kingdom of God in their home, and the crowns of martyrdom, which must be their daily goal, to take up their cross and follow Christ. Near the end of the wedding the crowns are removed with these words: “…receive their crowns into Thy kingdom, preserving them spotless, blameless, and without reproach, unto ages of ages.” On the eighth day of their married life, the couple returns to the Church for a formal removal of the crowns, and again, these words are spoken by the priest:

…preserve their union indissoluble; that they may evermore give thanks unto thine all-holy name, of the Father and of the Son and of the Holy Spirit: now and ever, and unto ages of ages. Amen.

All that is strictly earthly in a marriage will pass away. Love remains.

Other articles by Fr. Isaiah Gillette

“Family Concerns and Converting to Orthodoxy”

Thank you for your support!