Ascension Day and the Great Commission

The feast of the Ascension is one of the major feast days of the Orthodox Church.  On this day our Lord Jesus Christ is taken up into heaven and sits at the right hand of the Father.  This prepares the way for the coming of the Holy Spirit on Pentecost.

The feast of the Ascension is also significant because it is the day Christ gave the Great Commission to his apostles.

And Jesus came and spoke to them, saying, “All authority has been given to Me in heaven and on earth.  Go therefore and make disciples of all the nations, baptizing them in the name of the Father and of the Son and of the Holy Spirit, teaching them to observe all things that I have commanded you; and lo, I am with you always, even to the end of the age.” Amen.  (Matthew 28:18-20)

The Great Commission can be viewed as an enthronement speech given by the suzerain (king) at his coronation.  In more modern terms the Great Commission is like the newly elected American president giving his inaugural address to the nation and the world.  In it he lays out the agenda and priorities for his administration.

The Great Commission passage is more than a collection of last words or parting instructions by Jesus before he goes away.  Matthew frames it using covenant language.  In the ancient Near Eastern treaties the suzerain (ruler) recounts his might deeds or his conquests to his prospective vassals (followers).  The accounts of healing, exorcisms, and signs and wonders in Matthew’s Gospel announces the mighty acts by the suzerain.  The passion narratives also recounts the mighty acts by the suzerain.  Jesus by his death and resurrection having defeated Death the last enemy now proceeds to reclaim what belongs to him (1 Corinthians 15:24-27).  He sends out his Apostles into the world as heralds of the kingdom of God who invite the nations to submit to the rule of Christ.  To become Christ’s disciple is to submit to his kingly authority.  Covenant initiation is done through baptism into the name of the Suzerain. This calls for fealty (personal relationship) between the vassal and the lord.  If a Reformed Christian attends an Orthodox baptism he will hear strong covenant language. The baptized joins himself to Christ and accepts Christ as king.  After baptism one is no longer one’s own person but Christ’s.

The baptismal formula has an interesting grammatical structure; “name” is singular but is followed by three subsequent names: Father, Son, and Holy Spirit.  This point to the doctrine of the Trinity: we are baptized into one God: Father, Son, and Holy Spirit.  Another important grammatical aspect of the command to baptize is the collective pronoun “them,” a reference to the nations (ethne, εθνη).    While Christian baptism is profoundly personal, it also has a corporate dimension.  It is an affirmation of our unique ethnic identities.  The early Christians baptized families and social groups.  Paul baptized entire households (Acts 16:31-34, 18:8); later entire nations like the Russian people in the tenth century.  God’s redemptive work in Christ aims at the restoration of fallen humanity through union with Christ (Ephesians 1:10, 3:14-15).

Jesus closes the Great Commission using eschatological language.  The phrase “I am with you,” echoes Haggai 1:13: “I am with you, says the LORD” and strongly implies Jesus’ divinity.  It also echoes Isaiah 7:14 which promised that through the promised Messiah God would be with his people.  Furthermore, when Jesus promised “I am with you always” he was asserting his divinity.  In Matthew 28:18 Jesus asserted the universality of his lordship across space, heaven and earth; here Jesus is asserting the eternality of his rule in time.  Many Christians today take for granted Jesus’ divinity but for early Christians, especially for Jews, this was astounding in its audacity.  Jesus’ divinity would become a major issue that would result in the convening of the First Ecumenical Council in Nicea in 325 and the Nicene Creed.

The Orthodox Church and Missions

The history of Orthodox Christianity can be viewed as a history of Christian missions.  In the first three centuries the Church evangelized the Roman Empire which gave rise to the emergence of a Christian civilization.  Following that the Gospel was brought to the Western frontiers of the Roman Empire.  Saint Boniface evangelized Gaul (France) and Saints Patrick and Columba evangelized Ireland and Scotland.  Saints Cyril and Methodius brought the Gospel to the Slavs in the tenth century.

More recently, Orthodox missionaries like Saint Herman and Saint Innocent brought the Gospel to the natives of Alaska in the eighteenth century.  Orthodox missions in the twenty first century has resulted in conversions among the Mayans in Central America and the Turkana peoples in East Africa.  There is a growing interest in Orthodoxy in the Philippines and in Indonesia. 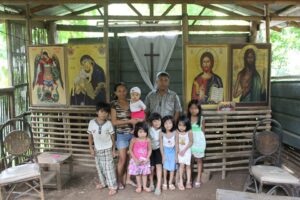 There is a mistaken perception among Orthodox and non-Orthodox that the Orthodox Church does not do missionarywork.  This is obviously not the case!

This Ascension Day celebration should be a reminder for Orthodox Christians to commit their lives to help bring the Gospel to all nations.  Fr. Luke Veronis wrote:

Missions does not simply represent a “nice” task of the Church, but it summarizes the essence of who we are as Orthodox Christians, and it embodies the very nature of the Church. Archbishop Anastasios emphasizes this in another way, “Missions is a part of the DNA of the Church’s genetic makeup.”

Fr. Luke Veronis.  “Our Orthodox Faith and the Centrality of Missions.”

Fr. Martin Ritsi.  “The What, Where, When, and Why of Orthodox Missions.”