Back to the Future for Protestantism? 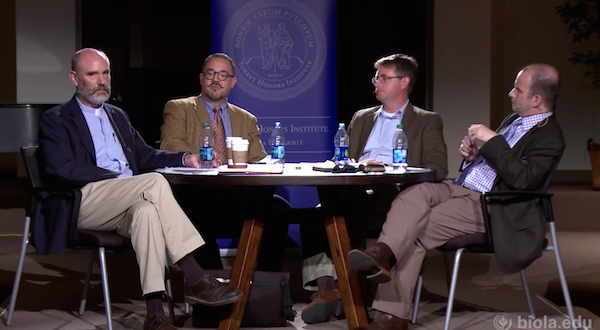 On 29 April 2014, Biola University hosted “The Future of Protestantism,” a panel discussion comprised of Peter Leithart, Fred Sanders, and Carl Trueman.  Brad Littlejohn gave the introduction and Peter Escalante moderated the discussion.  The event was prompted by Leithart’s essay “The End of Protestantism” which appeared in First Things in November 2013.  The essay generated quite a bit of discussion among Evangelicals and this event was designed for Leithart to have a face to face discussion with some of his critics.

The video is long – two and half hours.  To save time one can skip Brad Littlejohn’s 5 minute introduction.  Pastor Leithart’s presentation is only 15 minutes.  He is followed by Fred Sanders and Carl Trueman whose talks are about twenty minutes each.  This is the first hour.  The second hour consists of dialogue among the panelists.  The last half hour consists of questions from the audience.

I am writing this response from the viewpoint of a former insider who is both critical and sympathetic towards contemporary Evangelicalism.

Pastor Leithart’s presentation is a vision of what future Protestantism could look like.  It is based more on theological imperatives than on social analysis.  It is more about what Leithart wants to see happen than what he thinks will happen.  I imagine that if he had more time he might have brought in sociological analysis.  This is not to fault him, but it leads to questions that Leithart will hopefully attempt to answer down the road.

In many ways what Peter Leithart called for is nothing new.  It may be new, even startling, for modern Evangelicals but for those who know something about the original Reformation of the 1500s Leithart’s prescription will sound quite familiar.  Basically, what Leithart calls “Reformational Catholicism” is classical Reformation, one that Luther, Melanchton, Calvin, Bucer and others would have been very comfortable and familiar with.  Furthermore, Leithart’s attempt to reappropriate the early church fathers resembles the Mercersburg Theology and Oxford Movement of the 1800s.

Like most Christian bloggers I usually categorize Evangelicals as Protestants.  However, this understanding must be taken with more than a grain of salt.  Many of the original Reformers would question whether present day Evangelicals are Protestants.  Martin Luther abhorred the notion of rejecting infant baptism and strongly believed in the real presence of Christ’s body and blood in the Lord’s Supper.  Luther expected Christians to recite the Apostles Creed daily and to make the sign of the Cross in their morning devotion.  John Calvin strongly condemned those who held to a “bare symbol” understanding of Holy Communion and affirmed the visible church as our Mother.  I became aware of all this when I went beyond popular Evangelical publications and began to read up on the Reformers.  The discrepancy between modern day Evangelicalism and the original Reformation caused me to wonder: Are Evangelicals even Protestant?  If one takes a rigorous theological approach one could deny low church Evangelicals and their Pentecostal brethren are Protestant. Charity and intellectual flexibility are needed to classify modern Evangelicals as Protestant.

If Pastor Leithart is calling for Evangelicals to return to their Reformational roots one has to ask why they do not join up with the church bodies with the most direct ties with the original Reformation, the mainline denominations.  The answer is: For the most part mainline Protestant denominations have become apostate.  Many mainline liberals deny the divine inspiration of Scripture, the divinity of Christ, and even his bodily resurrection.  One has to ask: Why have so many of the mainline Protestant denominations and seminaries succumbed to the anti-supernaturalistic rationalism of the European Enlightenment?  In military terms it would be like an embattled battalion retreating to a position that has been taken over by enemy forces.

Evangelicals are the offspring of conservative Protestants who lost the denominational wars in the early twentieth century.  The raging controversies over biblical inerrancy stemmed from the emergence of a new source of knowledge: the autonomous reason of the European Enlightenment and modern science.  In the late twentieth century modern scientific rationalism found itself being displaced by postmodernism.  Will modern day Evangelicalism and Leithart’s Reformational Catholicism be able to withstand the coming onslaught from postmodernism?  I expect that postmodernism will take its toll leaving only a few congregations and seminaries unscathed.  I expect the Protestant brand will still be around by the year 2100, but the content of that future Protestant brand will have been redefined to the point that many of us today will not be able to recognize them as Protestants or even Evangelical!

My pessimism is rooted in what I call Protestantism’s fatal genetic flaw.  Lacking a stable binding hermeneutical framework (Holy Tradition) sola scriptura gives rise to multiple readings of Scripture.  This gives Protestant theology a fluid quality, one that results in theological incoherence.  It also results in numerous church splits as evidenced in Protestantism’s fractured and decentered denominational landscape.  Leithart’s failure to address the sociological consequences of sola scriptura constitutes a serious weakness in his presentation.

The implications for the future of Protestantism are troubling.  The more conservative, classical Protestantism of Luther and Calvin has no future.  It will continue on in declining isolated pockets, while the ahistoric low church Evangelicalism that Leithart deplores will increasingly dominate the Protestant landscape.  Evangelicalism will continue to mutate and adapt to post-modern American/Western society while oblivious to its Reformation heritage.  Pastor Leithart rightly waxes eloquent about the need for Christians to band together but there is little evidence of this becoming a broad trend among Evangelicals and Pentecostals.

Getting There From Here

Pastor Leithart’s call for a Reformational Catholicism is fraught with practical difficulties.  He failed to inform his audience how to get there from here.  One, isn’t it likely that a Baptist pastor who institutes weekly communion services and accepts as valid infant baptism will be fired by the church board?  Two, how many independent congregations would be willing to come under a higher church authority with the possibility that they might be forced to embrace foreign or exotic teachings and practices?  Three, who will have the authority to determine doctrine and worship where Scripture is silent or ambiguous?

One thing that struck me about the conversation was the frequency with which Roman Catholicism and Orthodoxy came up.  This raises the question: Can Reformational Catholicism have a future if so many of its best and brightest are converting to Roman Catholicism and Orthodoxy?  The numbers may be small but the caliber of their intellect is impressive.  We are talking here of pastors and theologians exiting Protestantism!  I wish Peter Leithart had spoken on the irony and significance of Jason Stellman who sought to try Leithart on grounds of heresy only to soon after become Roman Catholic!  Then there is Scott Hahn, a Gordon-Conwell Seminary graduate and Presbyterian seminary professor, who converted to Roman Catholicism.  Francis Beckwith was president of the Evangelical Theological Society until he stepped down as a result of his conversion to Catholicism.

Then one has to wonder about Jarsolav Pelikan, a Lutheran pastor and eminent professor of church history, who late in life joined the Orthodox Church.  The group of former Campus Crusade for Christ staff workers and their followers numbering two thousand joined the Orthodox Church in 1987.  Frank Schaeffer, the son of the famous Francis Schaeffer, became disenchanted with Evangelicalism and became Orthodox.  Michael Harper, who worked with the leading Anglican theologian John Stott, converted to Orthodoxy.  Many other younger, bright and serious men (some being Leithart’s students) have headed to Orthodoxy. Rarely a month goes by without hearing of another settled, mature, thoughtful Protestant church leader who after studying the church fathers headed to Orthodoxy.  (See Journey to Orthodoxy)

Thus, Pastor Leithart’s call for ecumenical cooperation and engagement with historic Christianity – Reformational Catholicism — while admirable will likely have unintended consequences for the very cause he so dearly cares about.  The growing permeability and fragmentation along the borders of Evangelicalism while it enriches also allows for easier exits.  The wave of the future may lie, not with Leithart’s Reformational Catholicism, but with people exiting Protestantism altogether for the ancient communions of Roman Catholicism or Orthodoxy.  This I suspect is the blessing of exposing young Evangelicals to the rich heritage of ancient Christianity.

The “Future of Protestantism” is part of an ongoing conversation taking place among those concerned about the future of Christianity in America.  This conversation needs to be continued and also expanded.  A wider range of people need to be brought into the conversation.  “Future of ProtestantIsm” was a Protestant event; one could even say that it was primarily an Evangelical event.  All the discussants hailed from small off shoot denominations: Leithart from the Presbyterian Church of America, Trueman from the Orthodox Presbyterian Church, and Sanders from the Evangelical Free Church of America.

Missing from the conversation were representatives from mainline Protestant denominations.  I would suggest that Leithart and his fellow panelists ask their mainline Protestant brethren: What accounts for the theological collapse of the church bodies that have the most direct ties to the Reformation?  And, what lessons does the mainline debacle have for Pastor Leithart’s vision of a Reformational Catholicism?

Also missing were former Protestants who have become Orthodox or Roman Catholic.  Due to their bicultural theological backgrounds they can speak knowledgably to Leithart’s vision of Reformational Catholicism.  They could also answer the following questions: After reading the early church fathers why didn’t you remain Protestant?  What compelled you to leave Protestantism altogether?  What compelled you to discard the Protestant principle of sola scriptura?  Many of these converts still regard themselves as Evangelicals and would be quite interested in being part of the conversation.