Clearing the Way for Reformed-Orthodox Dialogue on Icons 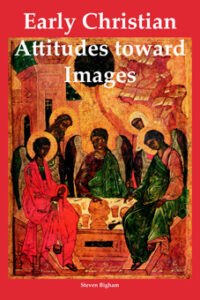 In recent years icons have become a matter of public debate among Protestants and Evangelicals, and Orthodox Christians.  Where in the past Protestants thought of icons as an Orthodox peculiarity or a quaint dispute quickly passed over in church history class, they are coming to grips with the fact that icons present a serious theological challenge to their theology.  In addition to the discovery that a rereading of Scripture from a different angle can lead to a solid biblical basis for icons, they must also grapple with the implications that ripple out from the historic role of icons in the early Church.   Cardinal John Henry Newman’s quip: “”To be deep in history is to cease to be Protestant” might be more true than most have considered!  [See my articles: “How an Icon Brought a Calvinist to Orthodoxy” and “The Biblical Basis for Icons.”]

The purpose of this review is to assess Bigham’s book in terms of its usefulness to the Reformed-Orthodox dialogue on the use of icons in Christian worship.  I plan to review Bigham’s book in four installments.

Given the highly charged nature of the topic it is important that we put out certain facts on the table at the outset.  Father Steven Bigham, Ph.D., is an Orthodox priest serving the Carpatho-Russian diocese in Montreal, Canada.  The book is published by the Orthodox Research Institute.  In his preface Bigham gives the book’s objective: “Eliminate once and for all the idea that the Christians of the first centuries were iconophobic.”  Thus, Bigham’s book is an unabashed Orthodox apologia for icons.

While many of our readers hold strong theological convictions, I am confident that they are likewise committed to the use of critical reason and evidence based approach to forming of their faith convictions.  In other words, we are not trapped by partisan categories; rather through an evidence-based approach one can come to a critically informed position on icons one way or the other.  The primary criterion driving this review is historical.  That is, how comprehensive is Bigham’s survey of the evidence from early the Christian period?  How balanced is Bigham’s assessment of the evidence?  How significant a contribution can the book make to the Reformed-Orthodox dialogue?

The argument against icons has taken several forms.  One major line of attack has been biblical, giving special attention to the Second Commandment.  Another has been a historical argument against icons.  The “hostility theory” proposes: (1) that first century Judaism was aniconic or iconoclastic, (2) the early Church reflecting its Jewish roots was likewise aniconic or iconoclastic, and (3) the incorporation of images can be attributed to Christianity’s assimilation into Roman society under Emperor Constantine.  For the reader’s convenience Bigham presents a lengthy excerpt that exemplifies the hostility theory (see pp. 2-3).

Bigham conducted a  literature review that shows much of the hostility theory can be traced to nineteenth century liberal Protestantism.  The contention here is that the modern historians invented the early Christians hostility towards images.  In his assessment Bigham notes that the theory assumes the absence of images in first century Judaism and that this theory has been weakened by recent archaeological findings of images used in connection with Jewish religious life.

When the hostility theory was being developed, our knowledge of ancient Judaism was much more limited than it is today.  The artistic monuments we know today were all still underground.  It is easy to see why no one questioned the notion that Judaism was monolithically iconophobic, but throughout the 20th century, our accepted ideas about the attitudes and the practices of ancient Judaism have gone through a radical revision and this especially as a result of recent archaeological discoveries.  Once again, artistic monuments, this time Jewish ones, have challenged the advocates of the hostility theory to reconcile the supposed Jewish aniconia and iconophobia with the Jewish artistic monuments found in the archaeological digs (Bigham p. 6).

Bigham examines the recent archaeological finding in Chapter 2.  But issue before us here is the way the hostility theory is framed.  It is important to keep in mind that much of the recent Protestant opposition to icons has been influenced by nineteenth century Christian liberalism and is thus markedly different from the iconoclasm of the seventh and eighth centuries, and from the iconoclasm in Calvin’s Institutes.  By deconstructing modern Protestant iconoclasm Bigham has made a substantial contribution to Reformed-Orthodox dialogue.  His analysis enables us to become critically aware of the issues and assumptions that unite us and divide us.  All too often it has been the hidden assumptions that have derailed inter-faith dialogue.  This creates a window of opportunity for two different theological tradition to converse with each other with understanding and empathy.

Another important task Bigham carries out in Chapter 1 is drawing the distinction between image and idol.  The term “image” covers a wide range of meaning.  Image can mean: (1) image of pagan deities, (2) religious art in the Mosaic Tabernacle and later Jewish temples, (3) decorative art in Jewish life, and (4) religious art used in Christian worship.   This distinction is important for how we understand the prohibition in the Second Commandment.  An awareness of these conceptual categories helps in the assessment of historical and archaeological evidences.

Another frequent problem in the dialogue between Orthodox and Protestant dialogue is the disparate understandings of Tradition.  Some Protestants assume that for Orthodox Christians Tradition is static, allowing no room for development.  This is not the case.  Bigham counters that stereotype noting:

Few defenders of the idea of Tradition claim that nothing has changed since the beginning of the Church, and everyone recognizes that all the changes that have taken place have not necessarily been for the good.  . . . .  A healthy doctrine of Holy Tradition makes a place for changes, and even corruption and restoration, throughout history while still affirming an essential continuity and purity.  This concept is otherwise known as indefectibility: the gates of hell will not prevail against the Church.  This theoretical framework, indefectibility, takes change and evolution into account but denies that there has been or can be a rupture or corruption of Holy Tradition itself (p. 15).

This description of Tradition as dynamic and organic with an element of continuity and fidelity is helpful for both Orthodox and Reformed Christians.  It recognizes Orthodoxy being situated in the messiness of human history.  It allows for Orthodox Christology existing alongside early heresies like Docetism, Arianism, and Apollinarianism without undermining the notion of theological orthodoxy.  The presence of early Christological heresies does not mean the early Church did not believe in Christ’s divinity or in the Trinity.  The Church had always held to these beliefs, but was forced by these heresies to articulate her beliefs with precision using “invented” terms like: Trinity, homoousions (consubstantial), and creatio ex nihilo (creation out of nothing).  The Reformed tradition’s understanding of the Trinity and Christology imply an acceptance of historical development in early Christianity.  A rigid and static approach to Christian tradition would require the jettisoning of important theological terms like: Trinity, hypostasis (person), ousia (being), and homoousios (of the same Essence).  No serious Protestant would dare take this position!

Most Protestant and Reformed approaches to this messy historic traditioning process all too often default to ahistoric propositional reductionism. The propositional reductionisms in their confessions fail miserably to deal rigorously with how the Church under the guidance of the Holy Spirit applied the implications of Christological dogmas. Thus, Protestant ecclesiology and its understanding of history seem void of any consideration of the Holy Spirit’s presence in the early Church and in lives of the church fathers. This tendency can be seen not only in the icon debate, but also with respect to the formation of the biblical canon.  The Holy Scripture so revered by Protestants and Reformed Christians is the result of several centuries’ long process in which the Church guided by the Holy Spirit determined which writings can be deemed divinely inspired and authoritative.  But when we read Reformed confessional documents we find only ahistoric assertions about the nature and makeup of the Bible.  It is as if the Bible miraculously appeared out heaven and landed in the early Church in leather bound version with all 66 books neatly listed with little or no human involvement in the making and shaping of the biblical canon.

Nevertheless, once adopted, Christian art became such an important support to the proclamation of the Gospel that its conscious rejection had very serious repercussions.  With time, the Church invested so much energy in its sacred art that a simple custom became an essential witness to the preaching of the Gospel.  Once again, images are not necessary as are baptism, the eucharist, the doctrines of the Trinity or the divinity of Christ, etc. without which we cannot even conceive of Christianity as we know it now.  Images became essential, in item and through the blood of the martyrs, because their rejection implied a weakening or even a denial of the Incarnation itself (p. 18).

Bigham here presents Tradition as concentric circles.  There is the essential core consisting of the Gospel, the Trinity, and the Eucharist, and an outer layer of practices like the use of incense, holy images, and church buildings.  While the outer layer is ‘less’ important, the organic nature of Orthodox Tradition is such that it is practically impossible to separate the various constituent elements.  Over time as the liturgical life of the Church flourished and as the early controversies led to a deeper appreciation of the Incarnation the role of images in Christian worship underwent a profound change.

It is important that any Protestant critique of Orthodoxy have an appreciation of Orthodoxy’s complex and nuanced approach to Tradition.  Failure to do so will result in the projecting of popular stereotypes on a venerable theological tradition. In short, a Protestant apologist presuming that for Orthodoxy Tradition is static will end up setting up a straw man argument.  This is shoddy apologetics and hinders Reformed-Orthodox dialogue.

Both those favor icons and those who oppose them argue from apostolic continuity. Those who oppose icons argue that they represent a lost apostolic Tradition, that the early Christians did not use images in worship, and that the introduction of images into Christian worship represent a rupture that require a return to the original apostolic Tradition.  Those favoring icons likewise argue from Tradition asserting there was no break in apostolic Tradition, that there exists a fundamental continuity between the early Christians and Orthodox veneration of icons.  For theologically conservative Christians, both Protestant and Orthodox, apostolicity is essential to authentic Christianity.  This gives them common ground as opposed to modernism. For theological liberals fidelity to apostolic tradition is less crucial than evolutionary adaptation to society.  If Reformed theology rests on a flawed historiography then Reformed Christians need to seriously reconsider the implications of icons for apostolicity and authentic Christianity.

The work done by Father Steven Bigham in Chapter 1 will make a valuable contribution to Reformed-Orthodox dialogue.  The care and attention which he gives to the issues underlying the recent icon controversy will assist both sides.  The Reformed-Orthodox dialogue on icons is far from over and has only just begun.  This book is recommended for both Reformed and Orthodox Christians.