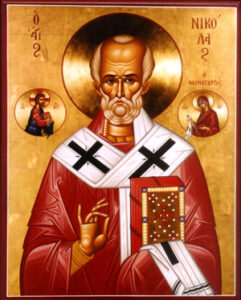 On 6 December, the Orthodox Church celebrates the life of Saint Nicholas of Myra.  He lived in the fourth century in Asia Minor (modern day Turkey).

He had a reputation for secret gift giving.  One story tells how in the middle of the night he secretly threw in tiny bags of money to an impoverished family, saving the daughters from being sold into prostitution.   In recent years this story was refashioned into Santa’s gigantic bag of toys for good boys and girls. 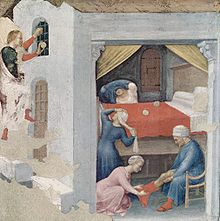 St. Nicholas throwing bags of gold into the window.  By Gentile da Fabriano (1452)

Christians who are struggling against the commercialization of Christmas can gain much comfort and inspiration from the original Santa Claus.  Ancient Faith Radio has a podcast series Saint of the Day.  For 6 December it featured: “Our Father Among the Saints Nicholas the Wonderworker, Archbishop of Myra.”  Being rooted in the history and tradition of the Church will enable us to approach Christmas with a fitting Christ-centered attitude.

I’ve juxtaposed three images to show the gradual shift in perception and understanding of St. Nicholas: (1) an Orthodox icon, (2) a fifteenth century oil painting from the Roman Catholic tradition, and (3) a modern day Santa Claus. 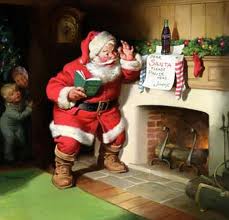 Visitors new to the OrthodoxBridge can read my posting from 2011: “Remembering St. Nicholas, Recovering a Christian Heritage.” In it I discussed how the venerable saint became transmogrified into a fantastic character with little or no grounding in Orthodox Tradition.  I also discussed how the Orthodox in America can be countercultural while maintaining a spirit of charity and humility.