Christ is Risen from the Grave! Trampling Down Death by Death! 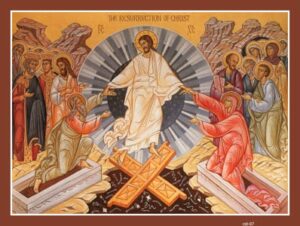 The Orthodox resurrection icon depicts what is known as the harrowing of hell.  It shows our God and Savior in hell setting the captives free.  Where the Western image shows Christ by himself with the angel looking on, the Orthodox icon shows Christ surrounded by people.  The Western depiction has a serenity like the calm after a storm, the Orthodox icon has more of a busy excitement of a military victory to it. 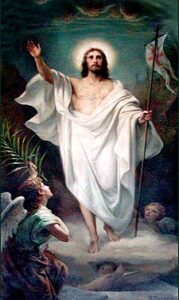 Western Depiction of the Resurrection

The teaching of the harrowing or the ransacking of hell is not confined to East.  It is a catholic (universal) belief of the early Church. Western Christians confess it every time they recite the Apostles Creed:

He suffered under Pontius Pilate,

Crucified, died, and was buried,

He descended to the dead,

On the third day he rose again.

Because the Apostles’ Creed is part of both the Roman Catholic and the Protestant traditions, Reformed Christians should also have no problem affirming Christ’s descent into hell.  Calvin in his Institutes (2.16.8) referred to it as “a matter of no small moment in bringing about redemption.”

How to Read an Icon 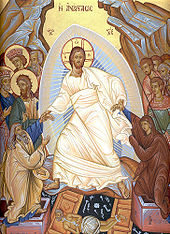 We do not so much look at an icon as we read an icon, that is, we discern the meanings behind the symbolism.  Icons have been referred to as sermons in color.  The best way to read an icon is to start at the center, at the person depicted, then to look outward.

The first thing we see is Christ all dressed in white which symbolizes the divine light or the heavenly realm.  We also see the mandorla or orb of glory around him.  These indicate Christ’s divinity and brings to mind the line in the Nicene Creed: “Light from Light, true God from true God.”

Next looking down we see Christ standing on top of the broken gates of hell.  The doors are laid on top each other in the shape of the cross.  Over the shattered doors we see in some icons Death defeated and in other icons we see a black abyss filled with the instruments of torture.

When reading an icon, we look at the subject’s hands.  Looking to the right and left of the resurrection icon we see Christ grabbing hold of our ancestral parents Adam and Eve pulling them out of the tombs.  If one looks closely we that it is Christ grabbing hold of them; we do not see them grabbing hold of Christ.  This shows our salvation being dependent on Christ’s power, not on our strength.  In the background we see a crowd of people, some having halos around their heads and others without a halo.  The halos signify their being saints, that is, the perfection of their salvation.  A hymn in the Great Friday Vespers has this stanza:

When You, the Redeemer of all, were placed in a new Tomb for us all, Hades, the respecter of none, crouched when he saw You.  The bars were broken, the gates were shattered, the graves were opened, and the dead arose.  Then Adam, gratefully rejoicing, cried out to You: “Glory to Your condescension, O Merciful God.”

Christ’s death, burial, and resurrection are affirmed in both Western Christianity (Roman Catholic and Protestant) and in Eastern Orthodoxy.  The differences in emphases reflect their respective theological paradigms.  In the Western tradition greater emphasis is placed on the penal substitution understanding of salvation, that is, the innocent Son of God suffering or being punished on behalf of the law breakers who deserve eternal condemnation.  In the Eastern tradition there seems to be a reticence to expound on the forensic understanding of Christ’s death on the Cross.  It sees other themes like renewal and deification:

You transform the mortal by death, and the corrupt by burial; for as befits God, You have made incorruptible and immortal the nature you assumed; for Your body, O Master, did not see corruption, nor was Your soul abandoned as a stranger in Hades.  (Great Friday Evening Service, Fifth Ode)

You came from a Virgin who knew no travail; Your side, O my Creator, was pierced by which You accomplished the re-creation of Eve, having Yourself become Adam.  Supernaturally, You fell into a sleep that renewed nature, awakening life from sleep and corruption, as the Almighty. (Great Friday Evening Service, Fifth Ode)

As a Protestant I knew about typological interpretation but in these services I gain new insights into Christ’s death on the Cross.  I had never thought of Eve’s coming from Adam’s rib (Genesis 2:21-22) as a type of the death and resurrection of Christ and the birth of the church!

In Orthodoxy there is an eagerness to expound on the significance of Christ’s resurrection.  It views Christ’s resurrection as the reversal of the Fall, the creation of a new humanity, a great victory over Satan, our being released from death, the ultimate healing of our souls and bodies.

When You, the Immortal Life descended to Death, it was then, that You put Hades to death by the lightning of the Godhead; and when You raised up the dead from the infernal depths, all the Heavenly Powers cried aloud: “O Giver of Life, Christ our God, glory to You.” (Matins of the Resurrection) 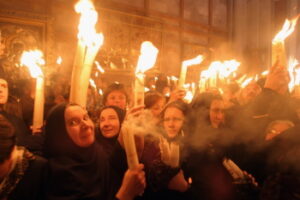 There is the palpable sense in the Orthodox Pascha (Easter) Liturgy that one age has come to a close and a new age has begun.  Over and over again we sing loudly and boldly:

“Christ is risen from the dead!

“Trampling down death by death!

“And upon those in the tomb bestowing life.

Wishing you all a blessed Pascha!