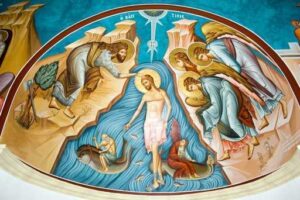 A Reformed Christian man and an Orthodox Christian woman are looking at an icon together of the Baptism of Christ called, “The Theophany.” The Reformed Christian states, “I have read about this icon and so I think I understand it. The dove represents the Holy Spirit and the ray of light from above represents God’s declaration: ‘This is my Son, the Beloved, with Whom I am well pleased.’ Christ is standing in the river as a symbol of deliverance from the murky waters of death. The small male figure on the left symbolizes the Jordan and the female figure on the right represents the Red Sea, both of which God parted to bring His people to the promised land. It is an allegory of the new life we have by Christ’s death and resurrection. Also, Christ is making the symbol of His name in His right hand and thereby is blessing us to follow in His example, thus He’s ordaining baptism as a practice for the Church.”

The Orthodox Christian turns to her Reformed friend and says, “Everything you described is correct. Yet when I looked at this icon, the first thing I experienced was profound humility. If the Divine Logos submitted Himself to ritual cleansing, how much more so must I? My baptism was only the start of my journey in needing to be obedient to God so that I may by His grace become purified of my sins. Christ is looking at me from the icon to invite me to the same fellowship He has within the Trinity. Tears come to my eyes as I’m reminded of how much I stray from a fuller life in communion with Him, and so I am led to once again seek forgiveness and repent. I want to be worthy of wearing the same pure white garment Christ wears in this icon—the robe that is promised to those who have become ‘washed by the blood of the Lamb.’”

The above vignette is offered to give an example of a difference between a Reformed and an Orthodox theological approach to epistemology. Neither person above is wrong in their encounter with the icon, but their experience and expression of it is initially different. The Reformed Christian viewed the icon from his mind, whereas the Orthodox Christian viewed it from her heart. After they stated their observations, I’m sure each could relate to one another’s perspectives—the Reformed gentleman could also personally and relationally experience the icon; and the Orthodox lady could also reflect on the symbols via her reasoning. Yet, their initial evaluation, their first perceptual engagement with the icon to answer the question “What does this mean?” is different.

Knowing how sensitive some readers might be, I want to state from the onset that I’m only generalizing: not all Reformed are one way and not all Orthodox are another. I’m not making any kind of absolute or exclusionist claim. What I wish to convey is a subtle difference in theological approach. For the Orthodox Christian, objective understanding tends to take a secondary position to a subjective relationship (e.g., “one’s prayer life informs one’s theology” to paraphrase Evagrius); whereas for the Reformed Christian subjective experience tends to take a back seat to objective reason (for an interesting paper on Calvin and reason see www.jsrhee.com/ST/Reason.htm). This is not to say that a relationship with God is unimportant to the Reformed because that would be absurd! Of course Reformed Christians endeavor to walk in fellowship with their Creator. Nor am I stating that the Orthodox are irrational in their theology which would be equally as absurd. Rather, the difference is one of underpinning and emphasis. The Reformed tend to focus more on a scholarly, analytical, catagorical engagement with the truth; whereas the Orthodox tend to promote more of an organic, synthetic, apophatic encounter. Yet, both want to “know” God.

For the Reformed Christian, their theological approach is based on a Western scholastic epistemology—from Augustine to Aquinas to Calvin to Sproul. The Reformed epistemology is informed by a singular source: the Holy Bible. The evidence for their truth is primarily based on logical consistency within a mostly literal rendering of Biblical accounts. Though secondary sources—archeology, linguistics, cultural anthropology, expert commentary, community consensus, etc—are taken into consideration, each individual determines their theological positions based on what they have reasoned for themselves as being true. Changes in theological position occur when “new”—relative to the individual—evidence is discovered or more logical arguments are deemed valid.

For the Orthodox Christian, their theological approach is based on an Eastern phenomenological epistemology —from the Cappadocian Fathers to Chrysostom to Palamas to Romanides. The epistemology is informed by a pluralism of sources: the Holy Bible, as well as the teachings of Orthodox Fathers and Mothers, Ecumenical Council decisions, the episcopacy within apostolic succession, the Church’s hymns, and the consensus of the laity—grouped together this is the “Tradition” of the Orthodox Church. This Tradition is corporately experienced through the practices of the Church rather than systematically taught. No particular individual can determine his theological position other than his initial decision to become Orthodox. Changes in theological position can only occur if the “organic whole” of Tradition concurs or one decides to leave the Church.

A priest told me that when a new person checks out his parish and inquires about what was happening in the liturgy, the priest is inclined to just shrug his shoulders and ask, “What was going on within you as you observed the service?” Though the priest has Biblical and historical answers for the proceedings, it is more important that the newcomer tries to “grok” what is happening. (Robert Heinlein’s “Stranger in a Strange Land” is very apropos to being at an Orthodox church service for the first time!) Again, this is not to say that reason doesn’t play a part in Orthodox spiritual life, rather the Church doesn’t teach reason (mental ascent) as being the primary route to save your soul.

Because the theological positions of the Orthodox Church is largely settled, the believer is more free to experience the Church and work out their salvation (Philippians 2:12), rather than continually strive for intellectual satisfaction and security.  I have no doubt there are those in the Reformed Church who have given themselves over to the theological position of whatever their denomination advocates and so they freely experience their Faith. However, if they have even an inkling of curiosity to explore in more depth what Christianity teaches about a particular theological point, they only have to go to their Christian bookstore and become bewildered by the vast array of contradictory perspectives offered to them by their Protestant brethren.

Though a Western mind set tends to revel in debate to gain an intellectually superior position, an Eastern mind set would see such an endeavor (unless in defense of heresy) as, frankly, “foolish” (1 Corinthians 1:20-30; 2 Timothy 2:23). And I say this knowing full well that by writing this article, I’m engaging in the same sort of foolish mental gymnastics that I did as a Protestant in order to convince my Reformed friends to reconsider their position! Yet, what I would rather be doing is taking you to an Orthodox Church service with me and afterwards asking you: “What was going on within you as you observed the service?” Did you say within yourself: “I don’t understand all of these rituals” or did you respond, “Wow, I’ve never felt such awe and a need to humble myself in worship before”? If you’re a non-believer, I’m more likely to question your experience of life (natural and supernatural) and invite you to a new experience, than logically persuade you via Bill Bright’s the “Four Spiritual Laws.” I’m not saying there isn’t a place for evangelism done by rational debate, something a Western civilized person is familiar with, it is just not the only route to come to know God.

An iconographer is primarily concerned about evoking an experience within the observer. Though the icon must be theologically correct, the symbolic meaning of the icon is secondary to an individual’s “participation” in either the event depicted or in the life of the saint. The strange reverse perspective of the icon, its non-static depiction of the saints in movement toward you or toward Christ, and its light depicted not from a particular location but from both inside and outside of the icon is all meant to include and involve you in the picture. An icon is not meant to be a descriptive snapshot of a particular event or person in Church history, rather an icon is a mysterious portal that makes you a subject in that scene or a friend to that saint. The icon encapsulates Orthodox theology better than anything else about the Church, not because of its symbolism nor its traditional style, but because the icon expresses that Christianity is to be experienced (“taste and see” Psalm 33:9/34:8) more than understood. You can neither fully comprehend an icon, nor the Orthodox Church, from an intellectually objective distance but rather only as an intimate subjective partaker.

The icon within the Orthodox church, particularly within the liturgy, is not meant to be a pretty decoration adorning the sanctuary walls; an icon is not there to give you something attractive to look at if you get bored during the service. Nor, as some non-Orthodox believe, are the icons primarily there to remind the faithful of Biblical events or the lives of the saints—which would be a rational epistemology. The icons are primarily painted to bring the viewer into fellowship with the Church Triumphant. The icons transform our experience—a phenomenological epistemology—from being on earth to being within the Kingdom of God. The icons do not just passively impart a sense of sanctity to the service; rather they actively transport us to the sacred realm that exists when one is fully, experientially, present with God and the saints (who are not dead but alive with Christ—Ephesians 2:4-7). The presence of the icons invites us to belong to a community that mystically transcends time and place. Therefore, “since we are surrounded by so great a cloud of witnesses, let us lay aside every weight, and the sin which so easily ensnares us, and let us run with endurance the race that is set before us, looking unto Jesus, the author and finisher of our faith” (Hebrews 12:1-2).