A Calvinist Who Crossed Over to Orthodoxy 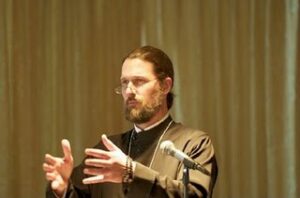 Journey to Orthodoxy just uploaded a very interesting interview with Fr. Josiah Trenham who grew up in the Reformed tradition then later converted to Orthodoxy.

Fr. Josiah grew up in the Presbyterian tradition and claims one of the Mayflower Puritans as an ancestor.  He did his undergraduate studies at Westmont College in Santa Barbara, CA.  His senior thesis was on Jonathan Edwards.  From there he went to Reformed Theological Seminary in Jackson, MS, and Orlando, FL where he studied under Reformed theologians like R.C. Sproul, John Gerstner, and John Frame.  He received his M.Div. from Westminster Theological Seminary in Escondido, CA.  He then went on to do doctoral studies at the University of Durham, England where he received his Ph.D.

While in seminary Fr. Josiah was licensed as a minister by the Presbyterian Church in America.  In 1993, he was received into the Orthodox Church and ordained into the priesthood by His Grace Bishop Basil, Bishop of Wichita and Mid-America of the Antiochian Orthodox Christian Archdiocese.  He currently pastors St. Andrew Orthodox Church in Riverside, CA.

Read this fascinating interview in JTO to find out why someone who studied at some of the best Evangelical and Reformed schools decided to become Orthodox!

For a slightly longer version of the interview visit the Examiner.com.