Being Faithful in Dark Times 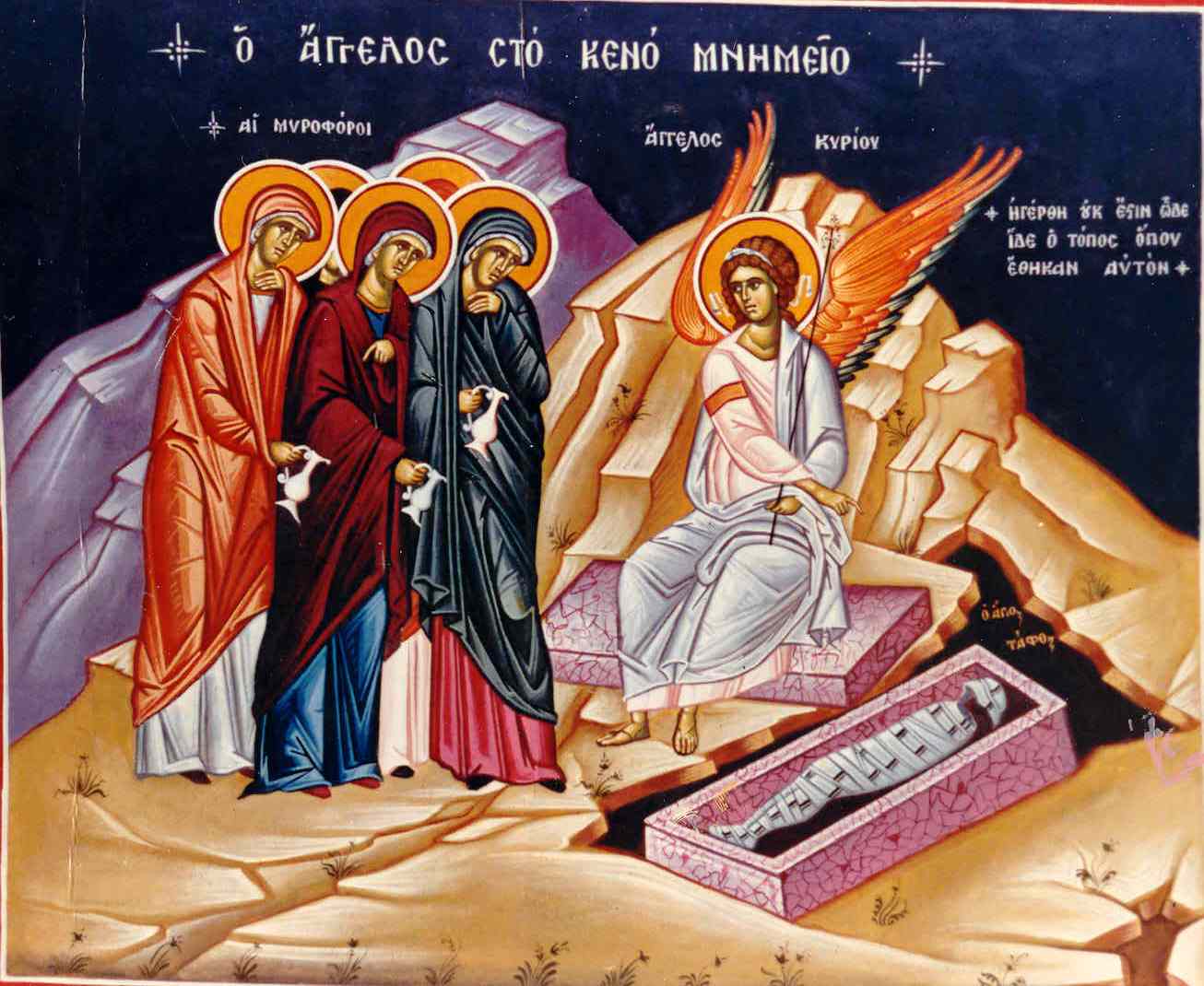 The Myrrh Bearing Women, carrying jars of aromatic spices to anoint Jesus’ body, being greeted by the Angel announcing the Good News of Christ’s Resurrection.

For the faithful women followers of Jesus, the period following Jesus’ crucifixion and death must have been bleak and painful.  It must also have been a time of depression, doubt, and confusion.  One lesson we can learn from the example of the faithful women is the importance of faithfully ministering to the needs of others, including the dead.  It was the custom in those days, as in so many other cultures, to show respect to the departed.  In Mark’s Gospel, chapter 16, we read about this act of faithfulness:

16 Now when the Sabbath was past, Mary Magdalene, Mary the mother of James, and Salome bought spices, that they might come and anoint Him. 2 Very early in the morning, on the first day of the week, they came to the tomb when the sun had risen. 3 And they said among themselves, “Who will roll away the stone from the door of the tomb for us?” 4 But when they looked up, they saw that the stone had been rolled away—for it was very large. 5 And entering the tomb, they saw a young man clothed in a long white robe sitting on the right side; and they were alarmed.

6 But he said to them, “Do not be alarmed. You seek Jesus of Nazareth, who was crucified. He is risen! He is not here. See the place where they laid Him. 7 But go, tell His disciples—and Peter—that He is going before you into Galilee; there you will see Him, as He said to you.”  (Mark 16:1-7; NKJV)

The grieving women had woken up in the predawn darkness, bought spices, then headed to the tomb to pay their respect to recently departed beloved Jesus.  They had a problem, the huge stone blocking the entrance to the tomb. This was a topic of conversation among them as they headed towards the tomb of Christ.  We read in verse 3:

And they said among themselves, “Who will roll away the stone from the door of the tomb for us?”

They did not know the answer, but they went anyway.  When they arrived at the tomb, God had a surprise waiting for them–Jesus had risen from the dead!  Due to their faithfulness, they were the first to hear the Good News of Christ’s resurrection and were given the task of evangelizing the Disciples.  For this reason the Orthodox Church honors the Myrrh Bearing Women on the second Sunday following Easter Sunday (Pascha).  On this Sunday, the Church sings:

You commanded the myrrhbearers to rejoice, O Christ! / By Your Resurrection, You stopped the lamentation of Eve, the first mother! / You commanded them to preach to Your apostles: The Savior is Risen from the tomb! [Kontakion – Tone 2]

There will be dark times in our lives when the road forward is blocked by a huge obstacle.  Through the ages the biggest obstacle for the human race has been Death.  The lock down for the COVID-19 (coronavirus) pandemic can be a time of anxious waiting.  It reminds us of the proximity of death.  Many people are looking forward to life returning to normal when we can forget about death, but for Christians, we look forward to our being sharers in Christ’s resurrection.  Let us follow the example of the Myrrh Bearing Women who were faithful in doing good deeds even in the face of obstacles and uncertainty.  Faithfulness in dark times requires inner strength and hope in something that we do not yet see.  Before the joy of Easter is a time of waiting and hoping, of faithfulness during dark times.