A Response to Pastor Toby Sumpter 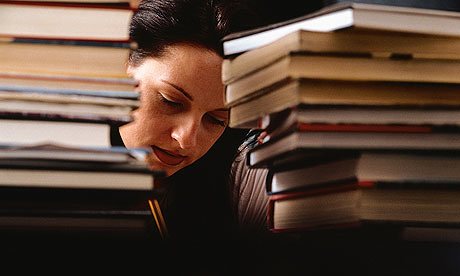 So much to read!

In “A Plea & A Sketch of an Argument on Icons” Pastor Toby Sumpter exhorts Protestants interested in icons and Orthodoxy to do their homework before making any move to Orthodoxy.  Reading through his admirably comprehensive list of references my first reaction was: “How many people have the time to do all this reading?!”  Second reaction was: “OMG!  This is way more than a typical seminary syllabus reading list! Is he expecting people to write a doctoral dissertation before converting to Orthodox?”

Here is what he wrote:

First the plea: do some serious study of the actual issues and arguments from both sides. This will take some time to do well. But if you are currently a Protestant considering taking the plunge, do yourself, your family, your current church family, and the catholic tradition the honor of really studying this topic. Can you summarize John of Damascus’ defense of icons? Can you explain where his defense is flawed (according to the Orthodox)? Can you summarize the iconoclastic argument of Constantine V? And what was flawed about his argument? Now sketch the contributions of Nicephorus the Patriarch of Constantinople and Theodore the Studite (abbot of the monastery at Studium). What did the Second Council of Nicaea actually decide? Be specific and trace the conclusion from Nicaea, Chalcedon, through John of Damascus, Nicephorus and Theodore. Now, are you familiar with the Western Carolingian response to the Second Council of Nicaea? Evaluate the claims in light of what you’ve already considered. Do your Protestant heritage the honor of reading the original Reformers on images. Summarize the views of Luther, Melanchthon, Oecolampadius, Bucer, and Calvin on the making and veneration of images. Finally, do some reading on the history of iconography itself. How widespread were [sic] the use of icons in the first three centuries? Does that matter? When the icon “triumphed” after Second Nicaea what stylistic changes did the icon undergo between then and the modern day? What does that mean?

So much for my plea. And related to all of this, spend time as you read and study comparing your notes with trusted counselors and friends, not just people who will smile and nod, but the kind of people who challenge you to think critically and carefully.

Toby Sumpter’s reading list is a lot like a military obstacle course that tests the strength and endurance of the strong and weeds out the weak.  This high level of expectations for Protestant inquirers is not realistic.  And more to the point they are unfair.  It makes me wonder if Pastor Sumpter is engaging in intellectual intimidation of Protestants interested in icons.

Serious readers might be disappointed Toby Sumpter did not provide links to his references.  Serious inquirers would benefit from links that help them get started in doing research on such a complex issue like icons and Protestantism.  Since he expects his readers to invest time and energy doing the reading, the least he could do would be to help them get started.

Below are links to a few sources mentioned by Pastor Sumpter and other articles that I consider important for getting a good grounding on the issue of icons, the Reformed objection to icons, and the Orthodox response to these objections.

Philip Schaff – History of the Christian Church Vol. IV “Medieval Christianity” pp. 447-470, § 100 to § 104 (19th century Protestant church historian) [Note: the link takes you to a PDF file that has a differentiation page numbering.  Reader is advised to search by section numbering, e.g., “§ 100.”]

John of Damascus – On the Divine Images

Theodore the Studite – On the Holy Icons

A Caveat – A good bibliography does not assure good understanding of the issue. It is of little value if one reads the text in a superficial manner, i.e., “scanning-with-a-bias/ax to grind.”  There is a tendency among some Protestant apologists to quickly scan early church texts and quote passages out of context to make the point they want to make.  Protestant readers who read the early church fathers need to guard against imposing their theological biases on the early Church.  The early Church was neither Protestant, nor was it Roman Catholic.  Many Protestant readers of the Church Fathers are like American tourists who, when visiting a foreign country, judge the local culture by their own  American standards, rather than appreciating the distinctive character of that foreign culture. This calls for careful and attentive reading of the early church fathers and the early church councils by Protestant readers.

Notice the unfairness hidden behind the benign pastoral counsel to “compare your notes with trusted counselors and friends.”  These Reformed friends and counselors are not going to be objective about icons.  Protestant inquirers need to be aware of the fact that icons are, for the most part, a highly charged topic between Reformed and Orthodox Christians today.  Among certain Reformed churches a display of interest in icons and Orthodoxy can lead to censure and other forms of church discipline. Strangely, this is true even in one liturgical-sacramental Reformed group willing to read and cherry-pick (borrow) much from Orthodoxy!  Protestant inquirers, especially those in the Reformed tradition, need to approach the issue of icons and Orthodoxy with eyes wide open.  My advice to those who find themselves between a rock and a hard place is to take the Nicodemus approach.  That is, to study the matter in private and make contact with Orthodox Christians discreetly, like the way Nicodemus came to Jesus at night (John 3:1-2). 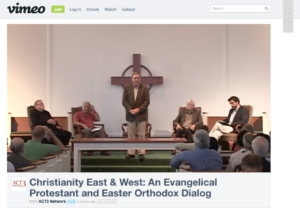 For several years I was blessed to have been part of a local group of Christians in Hawaii that met on a monthly basis.  It was a diverse group of people coming from Evangelical, Charismatic, Anglican, Roman Catholic, and Orthodox churches.  The diversity of perspectives was enriched by the fact there were former Protestants who had converted to Roman Catholicism and Orthodoxy, and thus were able to see more than one side of a theological issue.  From time to time, we would have debates over important issues like sola scriptura and the veneration of saints. Pastor John Armstrong organized a similar forum between Evangelicals and Orthodox in 2008 (see Vimeo podcast).

I propose that interested readers organize similar forums in their own areas.  It would be responsibility of presenters to do the “heavy lifting” (reading the sources recommended by Pastor Sumpter).  Those who don’t have the wherewithal to do the reading prescribed by Pastor Sumpter could benefit by listening to the presenters present their findings.  These face-to-face encounters are likely to be more fruitful than just posting comments on the Internet.

How Much is Enough?

One hidden danger in Toby Sumpter’s reading list is the assumption that head knowledge is enough.  Reading books about icons is not enough.  Protestant inquirers should make the effort to visit an Orthodox Sunday worship service (Liturgy).  While in the service they will find that icons play an important but supportive role in Orthodox worship.  The two major focal points of Orthodox worship are: (1) the Gospel reading in which the congregation hears the words of Christ, and (2) the Eucharist in which Christ offers his body and blood for the life of the world.  After the Sunday service the inquirer should talk with Orthodox church members about what icons mean to them and why they venerate icons.  It would be a good idea to talk to both converts and cradle Orthodox.  And of course, inquirers should meet one on one with the local priest.

Where Toby Sumpter’s approach is rational and doctrinal, the approach I am sketching here is similar to the way anthropologists approach the culture and practices of a “foreign” culture sympathetically in order to better understand it.  Orthodoxy at its core is not a system of abstract doctrines but a faith lived out in community and in worship. 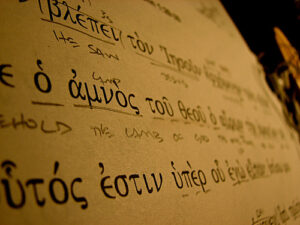 For those whose time and life situation is constrained I would say that the key issue is: Are icons biblical?  This is the bottom-line question.  More specifically, Is Orthodoxy’s veneration of icons in violation of the Second Commandment?  The Reformed position is: Yes.  The Orthodox position, on the other hand, is that the Second Commandment applies to the pagan idolatry of Egypt, the land the Israelites had just left.  The Orthodox note that later in the book of Exodus and other books of the Old Testament God gave instructions for the making of images in the Tabernacle and the Temple, i.e., in the place of worship central to the Jewish life.  I wrote an article “The Biblical Basis for Icons” that dealt with this question.  I am confident that the majority of Protestant readers will be able to compare the two ways of reading the Old Testament texts and make up their minds.

For Protestant inquirers who have more time on their hands I would advise them to approach Toby Sumpter’s massive reading list strategically.  You don’t have to read everything to find the truth of the matter.  If you are a Reformed Christian, read the leading theologian of the Reformed tradition, John Calvin, and his key work, Institutes of the Christian Religion.  Then read the two church fathers regarded by the Orthodox as the leading apologists for icons: John of Damascus and Theodore the Studite.  In addition to the doctrinal approach, inquirers should examine church history.  Which position reflected the general view of the early Church?  Was the early Church iconoclastic from the start?  Or was there early evidence for images in Christian and Jewish worship?  Which church council came to represent the historic Christian position on icon?  Then consider the issue from the standpoint of church unity.  Have the Orthodox across the various jurisdictions been united in the acceptance of icons?  Have the Protestants likewise been united in their opposition to icons? That Lutherans and Anglicans have been open to icons while Reformed Christians have not should make one pause and reconsider.  The absence of consensus and historical continuity in iconoclasm are indications that it is not part of historic Christianity.

Don’t let Pastor Sumpter’s long reading list intimidate you.  One does not have to become an expert theologian.  It is possible for busy lay people to discern the truth about icons and Christianity.  Growing numbers of Protestants, lay and clergy, have come to the conclusion that icons are indeed biblical and part of the historic Christian Faith.  In accepting icons they encountered the rich heritage of the ancient Church.