Question: The point that you made, Robert, about the use of icons in liturgy was understood. However, what might it look like for icons in an individual’s home? Where are the warning against idolatry in that context? How would one know if an icon was being used as an idol away from the context of a Church service?

Answer: Interesting question!  What are some possible deviant/idolatrous practices?  One possibility is someone buying a New Age icon of Christ, e.g., a Navajo Christ.  I’ve seen that in a Roman Catholic bookstore!  Another possibility is for someone to have only an icon of Mary in an icon corner and direct most of his/her prayers to the Virgin Mary.  Or the Archangel Michael as one’s guardian angel and no icon of Christ.  An icon corner without the Pantocrator icon of Christ is unbalanced and not Orthodox.  Fundamentally, Orthodox prayer is Trinitarian and Christ centered.  We pray with the saints to God.  The saints are our prayer partners, Christ is our Mediator with the Father.  Jesus Christ is the Way to God the Father.

Icons are aids to the worship of the one true God and for that reason are not idols.  The purpose of icons are to draw us closer to God.  They are “windows to heaven.” They make visible the invisible reality of heaven.  Icons manifest Jesus Christ the eternal Word who took on human flesh for our salvation (1 John 1:1-3).  Icons also manifest the great cloud of witnesses (saints) that surround us (Hebrews 12:1).  Icons help lift our minds from earthly things to the things above (Colossians 3:2).

There is a sobriety in Orthodox prayer that contrasts with the emotionalism of Pentecostalism.  The icon of Christ serves as an aid for the focusing of our attention while praying but one cannot manipulate God by praying loudly and fervently to the icon of Christ.  Another possible abuse is placing food before an icon.  I haven’t heard of this happening but it is a possibility in non-Western cultures.  If this happens it is the responsibility of the local clergy to restore proper order. 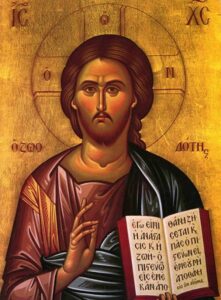 Anyone who wishes to construct an Orthodox icon corner should consult with their local priest.  Most likely the priest will instruct the new believer to buy a Pantocrator (Christ the all ruling One) then an icon of the Theotokos (the Virgin Mary).  After that it’s good to get an icon of one’s patron saint.  My advice is that from here on out you add icons of saints that you feel an affinity for.  But the icons should not be viewed as decorations but aids to one’s personal devotion.

Besides the various icons, many Orthodox icon corners have a wall cross, a vigil lamp, an incense burner, and a prayer book.  Some people like to have a prayer rope nearby. 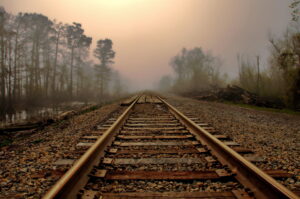 So just as important as icon for an Orthodox personal devotion is an Orthodox prayer book.  The Morning and Evening Prayers and the other prayers found in an Orthodox prayer book provide as it were the rails for one’s personal prayers.  Prayer in Orthodoxy is like a railroad track, it is not like a trail one can wander off and on as one chooses.  It’s okay to make up one’s personal prayer requests but it is important to let one’s personal prayer life be shaped by the Church.  Just as the Liturgy frames our corporate worship so the prayer book frames our personal devotional life.  If one participates regularly in the liturgical life of the Orthodox Church and submits to the local priest your concern about turning icons into idols will be taken care of.  There’s a little helpful acronym in Orthodox circles: AYP – Ask Your Priest!  The icon along with the Liturgy, the prayer book and the pastoral care of the priest all form part of the matrix known as Holy Tradition.  The purpose of capital “T” Tradition is Orthodoxy: that is, right belief about God and right worship of God.

If you are an inquirer, I would advise you to take all this slowly.  Think of it like learning classical music.  Sometimes it’s better to first listen to the music, get the sense of the music before picking up an instrument and attempt to play the score.  I have advised other inquirers to read and analyze the prayers in Orthodox prayer books before saying the prayers.  There are some prayers that non-Orthodox Christians are not ready to pray, e.g., prayers to the Theotokos (Mary).  The Orthodox rule of prayer is one that one grows into.  And it helps to have the help of others!  So icons may look dangerous to a Protestant inquirer but there are a multitude of safeguards in place in the Orthodox Church.  Come and see! 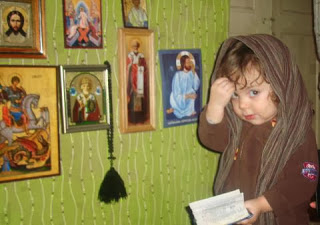 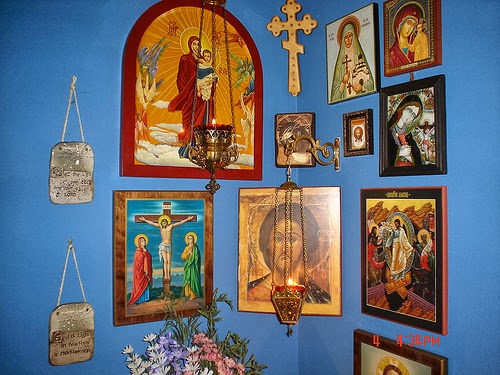 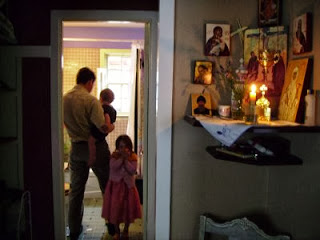 A spiritual center for the family. Source