The Incarnation Changes Everything 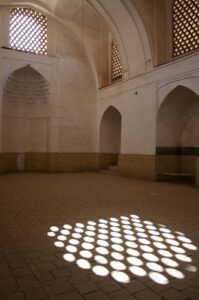 Muslims reject the Incarnation. Therefore, this mosque has bare walls and no images of God.

Before the Incarnation, it was idolatrous to make an image of God.

Now that the Incarnation has taken place, it would be idolatrous not to make images of Him.

When a religion rejects images of God, it sends the message that God is only a spirit, and that He has no physical body. Before the Incarnation, that was true. After the Incarnation, it is false, and is therefore idolatry.

There are two types of idolatry:
1) Worshiping false gods, and
2) Worshiping the true God in
a way which misrepresents Him.

In ancient Israel, when people worshiped Baal, Ashtoreth, and Molech, they committed the first form of idolatry. These are all false gods, and it is idolatry to worship them in any way whatsoever, either with or without images.

When the Israelites worshiped the golden calf, they committed the second form of idolatry. They correctly noted the identity of the true God, but they grossly misrepresented Him. Instead of recognizing God as an invisible Spirit, the Israelites made a golden calf, they praised it for delivering them from Egypt, and they even called the calf “YHWH”. 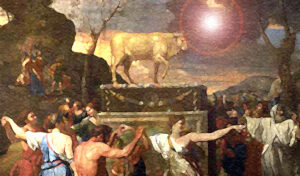 In the Old Testament, images of God were forbidden, because they misrepresented Him. God is not a cow. And God did not yet have any physical body.

Before God became incarnate in the womb of Mary, He had no body. Images of God were forbidden, because they misrepresented God.  But now that God has become incarnate, our worship must reflect this important fact.  Otherwise, if we misrepresent God, we become idolaters.

Dura Europos Synagogue — 244 A.D. — Worshipers would face the icons, and would bow toward the Torah scrolls located at the center of the wall.

In ancient Israel, God did not want His people bowing down before images of Himself, because He did not have a body yet. But He knew that people needed to bow down before something, so He provided the Temple in Jerusalem for this purpose. The temple did not represent the image of God, but it did represent His presence. So God had His people bow down toward the temple:

But I, through the abundance of your steadfast love, will enter your house. I will bow down toward your holy temple in the fear of you. (Psalm 5:7)

Anticipating the day when He would become man, when His people would be able to have images of Himself, God taught His people to include many images in the context of worship. The Jerusalem temple included icons of angels, and early synagogues were covered with icons of many Old Testament saints.

The Word had not yet become flesh, so God’s people venerated the Word of God contained in Scripture. Even to this day, Jews bow toward the Torah scrolls when entering/exiting the synagogue, and also during special Torah services. Jews also kiss the Torah to venerate it. All of these ancient practices anticipated Orthodox Christian worship, including the veneration of icons.

Before the coming of Christ, the Jewish Temple signified God’s presence, and His peoplebowed down toward it. After Christ came, He referred to His own body as the true temple. Therefore, instead of continuing to bow down toward a temple building, we now bow down toward images of Jesus.

We also bow to one another, because Scripture says that every Orthodox Christian is a temple of the Holy Spirit. 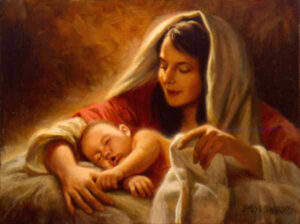 When the Word became flesh, iconoclasm became idolatry. The Incarnation changes everything.

When Orthodox Christians bow to an icon of Christ, they are reminded thatGod now has a body.  Jesus is fully God, and fully human, and He is physically seated in Heaven even today. Orthodox worship represents God correctly.

When Protestants refuse to bow to icons of Christ, and they choose to bow down before nothing instead, their worship suggests that God has no body, and that the Incarnation hasn’t happened yet. Their worship misrepresents God. They are bowing down before a faceless idol.

The Incarnation changes everything.

About Fr Joseph Gleason
I serve as a priest at Christ the King Orthodox Mission in Omaha, Illinois, and am blessed with seven children and one lovely wife. I contribute to On Behalf of All, a simple blog about Orthodox Christianity. I also blog at The Orthodox Life.