Not too long ago I came across a fine blog posting by the Rev. Uri Brito on Christ’s bodily ascension to heaven.  While he and I come from different church traditions (Reformed versus Orthodox), there are some points in theology where we share common ground.  Reading Rev. Brito’s reflection reminded me of the debt I owe to the Reformed tradition: how it led me out of the shallows of Evangelicalism into the deeper waters of theology, doctrine, and the church fathers, and how the Reformed tradition (for me) pointed to the Orthodox Faith.

When I was an Evangelical I rarely heard sermons or read expositions on Jesus’ ascension into heaven.  Pastor Brito apparently had the same kind of experience.  He writes:

The Ascension of Jesus is barely mentioned in the evangelical vocabulary. We make room for his birth, death, and resurrection, but we tend to put a period where God puts a comma.

This reflects the sad fact that for many Evangelicals the Incarnation plays a minor role in our salvation.  The focus of Evangelical soteriology is on Christ’s physical sufferings on the Cross.  This is rooted in the penal substitutionary theory that Christ offered up a pure and sinless offering on the Cross so that our sins would no longer be counted against us and that Christ’s righteousness would be imputed to those who believe in him.

Being rooted in the Reformed tradition Pastor Brito has a better grasp on the implications of the incarnation for our salvation.  He writes:

Our Lord is in his incarnation body at the right hand of the Father. This has all sorts of implications for us in worship. We are worshipping a God/Man; one who descended in human flesh and who ascended in human flesh. He is not a disembodied spirit. He is truly God and truly man.

The early Christians had a much broader understanding and deeper appreciation of the Incarnation of the eternal Word (Logos) for our salvation.  Athanasius in his classic work On the Incarnation wrote: “For He was made man that we might be made God.”  (54.3) Gregory of Nazianzen wrote: “For that which He [Christ] has not assumed He has not healed;  but that which is united to His Godhead is also saved.” (Epistle CI)  This understanding of salvation sees the Incarnation like a 360 degree circle in which the eternal Word descended from heaven, took on human nature, died on the Cross, descended in Hell, rose on the third day, then forty days later ascended to heaven to sit at the right hand of the Father.  This means that those who have joined themselves to Christ are positionally with him at the right hand of the Father wherein we enjoy the covenant benefits that belong to Christ by his divine sonship.

This understanding of the Incarnation and its connection to the Ascension represents a significant theological paradigm shift.  Evangelicalism has changed much in recent years, but back in the 1980s serious interest in the Incarnation for Evangelical theology was considered either on the cutting edge or out in left field.  I am grateful for the Reformed tradition teaching me about the early Church and expanding my theological understanding.

I remember one particular incident while I travelling with some Christian friends on the island of Kauai.  As we drove around the island I would from time to time entertain myself by reading the Heidelberg Catechism.

Q.  49. What benefits do we receive from Christ’s ascension into heaven?

A.  First, that he is our Advocate in the presence of his Father in heaven.  Second, that we have our flesh in heaven as a sure pledge that he, as the Head, will also take us, his members, up to himself.  Third, that he sends us his Spirit as a counterpledge by whose power we seek what is above, where Christ is, sitting at the right hand of God, and not things that are on earth. Heidelberg Catechism

I remember being startled when I read this strong affirmation of Christ’s taking on flesh for our salvation.  As an Evangelical I heard much about Christ’s birth and his death on the Cross.  I heard a little about Christ’s resurrection but almost nothing about the significance of his ascension for our salvation.  Reading this little gem in the Heidelberg Catechism, one of the major confessions of the Reformed tradition, helped me to appreciate the Incarnation as a long arc that included Christ’s birth, his death on the cross, his third day resurrection all of which culminates in his ascension to the Father.  It also challenged my understanding back then of heaven as strictly a spiritual place.  As I moved towards Orthodoxy I began to understand that in the Christian worldview both the heavenly and earthly realities interpenetrate each other.  This understanding is critical for a sacramental worldview.  [This is the introduction to an earlier post in 2012.] 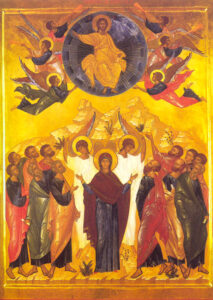 For readers who are wondering why I am posting this so many weeks after the original posting (8 May 2013), the reason is that on 13 June 2013 the Orthodox Church around the world will be celebrating Ascension Thursday.  The different calendars between the Eastern and Western church traditions are something Protestants converts to Orthodoxy have become accustomed to.  Nonetheless, it is worth noting that the Nicene Creed formulated by the First (Nicea 325) and Second (Constantinople 381) Ecumenical Councils unequivocally affirm the Incarnation and Christ’s bodily ascension to heaven.

For the Orthodox, Ascension Day is one of the major feast days of the Church.  They are expected to make an attempt to be at church.  For inquirers, attending a midweek service has the advantage of not getting lost in the crowd and seeing for one’s self how the Orthodox Church understands Christ ascension to heaven.  I encourage readers to contact a local Orthodox church and inquire about the time of their services.