Baptist Questions About Ignatius of Antioch 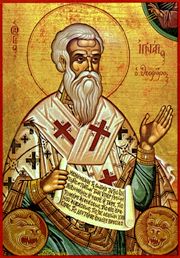 Dear Folks, Burckhardtfan wrote some important questions about Ignatius of Antioch’s understanding of the early Church. As my answer grew longer I decided to turn it into a blog posting.Burkhardtfan wrote:

Thank you for another brilliant post. I just have two questions:

1. When Ignatius says that nothing should be done without the bishop, what does he mean by the word ‘bishop’? Does it mean a local pastor or someone with authority over local congregations in a certain area? Congregationalists believe that local churches should be completely autonomous, believing that any external authority which in any way dictates the affairs of a local church is illegitimate. This is especially prominent among Baptist churches; they jealously guard their independence. Does Ignatius or any other father clarify what they mean by a bishop or describe the functions of this particular office?

2. In the same passage, what is the phrase ‘catholic church’ in the original Greek/Latin (I don’t know which language Ignatius wrote in)? Does it really mean ‘universal’ in the original Greek/Latin, or is the English translation an interpolation? I know the Greek word ‘katholikos’ means universal; if this word is present, then I know the concept of a ‘catholic’ church existed from the very beginning (some Baptists completely reject the notion of a ‘universal Church’ – and some go so far as to reject the idea that the Church is the Body or Bride of Christ!)

1. The Office of the Bishop

In Titus 1:5 Paul reminds Titus that he gave Titus the assignment of appointing elders in every town and to “set in order the things that are lacking.” Here Titus is acting in the capacity of a bishop, and the elders playing the role of priests assigned to a local parish. It appears that there were already Christian fellowships in these towns but that they needed to be recognized and brought into proper relationship with the Church catholic. Also interesting is Titus 2:15: “These, then, are the things you should teach. Encourage and rebuke with all authority. Do not let anyone despise you.” This makes sense if Titus is acting as a bishop attempting to bring order to a troubled diocese. Given the egalitarianism of Baptist polity I cannot imagine a Baptist pastor exercising “all authority.” More significant is the Greek word επιταγης (epitage) which Kittel’s Theological Dictionary of the New Testament vol. viii p. 37 has this to say: “…it denotes especially the direction of those in high office who have something to say.” (emphasis added)  That the meaning of the original Greek “epitage” is based on authority coming from a higher office is consistent with the office of the bishop as a hierarchical position.

Acts 14:23 indicates that only qualified men were appointed (ordained) to office of elders. The verse also notes that this was the standard practice for local leaders to be appointed by those with apostolic authority. This was not an independent action by an autonomous congregation but a church under the authority of the Apostles. Baptist churches are self-organized, not by an external authority; this is contrary to Acts 14:23.

The following chapter (Acts 15) shows how the early Church responded to a theological crisis. In response to the controversy over whether Gentiles needed to become Jews in order to become Christians a council was convened in Jerusalem. This set a precedent for future Ecumenical Councils. (For those unfamiliar with church history, the Seven Ecumenical Councils defined the parameters of orthodox Christology and Trinity.) From the Jerusalem Council came a letter showing how the issue was resolved. This decision had binding authority on the churches. This is quite different from the Baptist polity.

Another indication of the bishop as the leader of the city can be found in Revelation 2 and 3 in which a letter was sent to the respective “angel” (bishop) of the cities of Asia. In Revelation 2:5 Jesus warns the bishop of Ephesus that he would be removed from office (remove your lampstand from its place) if he did not amend his ways. So when we look at Ignatius’ letters we see them addressed to the church of a particular city. This points to the local church as the unified gathering of congregations in one particular city or area. Ignatius could have addressed it to a particular home fellowship but he did not.

The word “bishop” is derived from the Greek επισκοπος (episcopos). It comes from “epi” (over) and “skopeo” (to pay attention to, be concerned about). The modern English word “supervise” is similar in meaning coming from “super” (over) and “vise” (to see) thus to “oversee.” Some denominations have superintendents instead of bishops but the overall function is similar. One critical difference is that Protestant superintendents cannot claim apostolic authorization for their office. See my posting on the office of the bishop and apostolic succession.

Ignatius of Antioch (d. 98/117) was very familiar with the polity of the early Church. He came from Antioch the home church of the Apostle Paul. According to the book of Acts Antioch was where Paul received his missionary calling and it served as his home base for his missionary journeys (Acts 13 and 14). Ignatius was the third bishop of Antioch after the Apostle Peter and Euodius, whom he succeeded in AD 68. Thus, Ignatius’ letters cannot be ignored as a later development but must be treated as a direct witness to the early church.

Regarding the Greek word καθολου (katholou) that Ignatius used in his letters, the Liddell-Scott Lexicon gives the following meanings: (1) on the whole, (2) in general, and (3) in the negative – not at all. Etymologically, “katholou” comes from “kata” (according) and “holou” (whole, all) and thus can mean: according to the whole. An excellent discussion of the emergence of the idea of the church catholic can be found in JND Kelly’s Early Christian Doctrines (p. 190):

If the Church is one, it is so in virtue of the divine life pulsing through it. Called into existence by God, it is no more a mere man-made agglomerate than was God’s ancient people Israel. It is in fact the body of Christ, forming a spiritual unity with Him as close as is His unity with the Father, so that Christians can be called his members.

So to answer your question is: No. The word “catholic” is not the same as “universal.” The word “universal” has more of the sense of geographic dispersion, being everywhere. The better word for that is the Greek word οικουμενη (oikoumene).

Let me give you an analogy to illustrate the notion of “according to the whole.” 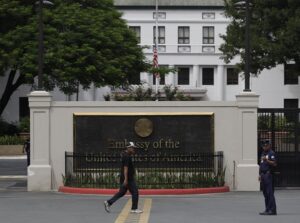 US Embassy in Manila, Philippines

Imagine a US embassy located in a far off country in Africa or Asia. That embassy is not the United States but it is definitely a part of the USA. An action taken there is applicable elsewhere in the US and American embassies around the world. This is because that embassy and its staff work under the authority of the US government.

In a similar manner, the Orthodox Church through apostolic succession exercises authority from Christ and his Apostles.  What unites the local parish to the entire Church is the Eucharist in which we feed on the body and blood of Christ. The Orthodox parishes around the world shares in the same worship and doctrine. What one sees at one parish will be the same as other parishes around the globe. This liturgical and doctrinal unity is proof that Orthodoxy is the Church Catholic.

Imagine also a group of natives in the area who love the United States and want to be US citizens. They form an American club, read the US Constitution every week, eat hamburgers often, and celebrate the Fourth of July once a year. Would that make them US citizens? Of course not. They could pass for Americans but the key thing is whether they have the right to vote. This is the quandary of Protestants; they think that just holding a copy of the Bible in their hands make them a church. Early Christians like Ignatius of Antioch would strongly disagree. The key here is the Eucharist under the bishop.  Ignatius wrote:

Let no one do any of the things appertaining to the Church without the bishop. Let that be considered a valid Eucharist which is celebrated by the bishop, or by one whom he appoints (To the Smyrneans VIII)

A Protestant might object: “What’s the big deal about the Eucharist? It’s just a symbol.” The answer to that is that historically Christians have always since the beginning affirmed the real presence in the Eucharist. The symbolic understanding is something that surfaced on the radical fringes of the Protestant Reformation. Because the Eucharist links the local church to the Christ’s death on the Cross, the Eucharist is the source of the Church’s covenantal authority. Thus, the way Baptists and Congregationalists celebrate the Lord’s Supper makes visible their disconnect from the early Church.

I used to belong to a congregational church. Once I was on the church by-laws committee. The moderator wanted to do some minor updating to the by-laws. I persuaded the rest of the committee to put everything up for review including the church’s statement of faith!   I recommended some changes to the statement of faith that were approved. And ironically, the by-laws revisions led to my old church moving away from pure congregational polity to an elder model. As a congregational church we were free to do as we pleased. As an Orthodox Christian I look back on all this with amazement, amusement, and horror. 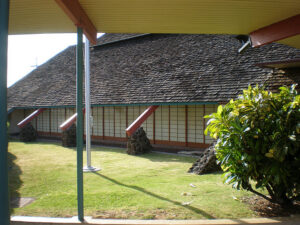 I understand and appreciate congregationalism’s emphasis on local church autonomy. It’s a very useful defense against a denomination attempting to impose strange doctrines on the local church. My former home church (Kalihi Union Church) was staunchly evangelical in the liberal mainline United Church of Christ. Over time I became concerned by the fact that that local church autonomy, while it provided some protection against liberal theology also made for a highly dysfunctional ecclesiology. Unity becomes more a mirage than a reality.

Closing Question for Baptists and Congregationalists

The question I have for any Baptist or Congregationalist reading Ignatius of Antioch’s letters is: If the polity and worship practice described by Ignatius is at odds with your congregational polity and practice, whose church more closely resembles the early Church founded by the Apostles? Ignatius of Antioch’s which lives under the bishop and celebrates the Eucharist every Sunday or the Baptist/Congregational church which has no bishop and celebrates the Eucharist infrequently?