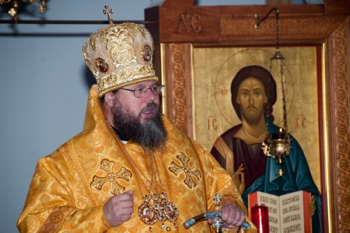 Monday, January 23 is March for Life Monday.  It is an annual rally in protest of the US Supreme Court Roe vs. Wade decision which legalized abortion in America.  It began in 1974 with an estimated 20,000 in attendance.  Since then March for Life has grown in size over the years to over 200,000 in recent years.

March for Life brings together people from the Roman Catholic, Protestant, and Orthodox traditions.  Metropolitan Jonah, who heads the Orthodox Church in America, has played an active role in recent marches and rallies.

The pro-life stance is intrinsic to the Christian Faith.  Historically, the Faith of the Church consisted not only of a set of doctrines but also a moral code.  The Church has been pro-life from early on.  We find in the first century The Didache II.2 a prohibition against abortion: “thou shalt not procure abortion, nor commit infanticide.”  Thus, being pro-life is integral to being Orthodox. 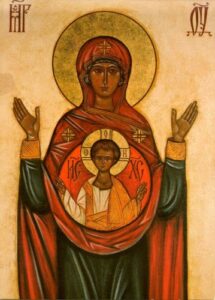 Orthodoxy’s pro-life stance can be seen in the icons of Mary the Theotokos (the God Bearer).  This icon is known as the icon of “The Sign,” a reference to Isaiah 7:14: “Behold, the virgin shall conceive and bear a Son…. (NKJV).”  In many Orthodox churches there is on the front wall over the altar an image of Mary, over her midsection is a circle depicting the Christ Child.  This circle symbolizes Mary’s womb and thus teaches that the Incarnation includes the nine months that the Christ Child spent in her womb as an unborn child.  In light of Irenaeus of Lyons’ doctrine of recapitulation, Christ the Second Adam saves us by recapitulating (retracing or reenacting) the whole of human life: from gestation, to infancy, to maturity, to his death, resurrection, and ascension to heaven.

With respect to the Reformed tradition, we find a similar pro-life stance.  Karl Barth wrote in his Church Dogmatics (II/4, 415ff.):

The unborn child is from the very first a child.  It is still developing and has no independent life.  But it is a man and not a thing, nor a mere part of the mother’s body….He who destroys germinating life kills a man….The fact that a definite No must be the presupposition of all further discussion cannot be contested, least of all today” (quoted in The Evangelical Theological Dictionary, p. 4)

Being pro-life is intrinsic to the Christian Faith.  To abandon this moral code as described in the Didache is in effect to abandon the Faith.  For this reason Orthodox Christians have more in common with the conservative Evangelicals than the mainline Protestants who have abandoned the church’s historic pro-life stance on abortion.

There is a difference between being anti-abortion and being pro-life.  The anti-abortion stance can be rooted and confined to a legalistic morality; the pro-life stance draws its spiritual motivation from life affirming love.  The pro-life stance allows for an expansive moral framework that includes not just the unborn, but also the newly born, the weak, the frail, those who are sick or elderly, and the strangers in our midst.  Taken this way one can detect pro-life themes in parables like The Good Samaritan and The Prodigal Son.  The Good Samaritan story teaches us that even a healthy man can become our neighbor in need.  The Good Samaritan (Christ) comes to the aid of the stricken man and takes him the Inn (the Church).  The Prodigal Son story teaches us that life apart from the Father’s love leads to ruin and destruction, and that true life is found in the return to the Father’s loving embrace.

Roe vs. Wade marks a watershed event in American history.  It marks a turn away from the Constantinian paradigm which assumed a political order informed by Christian values.  As we move increasingly into what looks like a post-Christian society it is imperative that Christians from various traditions find common ground in the Great Tradition.

On March for Life Monday let us remember Mary the Theotokos (the God Bearer) who affirmed life by carrying Christ in her womb for 9 months.  Let us remember Jesus Christ who once like all of us was an unborn child.