Book Review: The Mercersburg Theology and the Quest for Reformed Catholicity 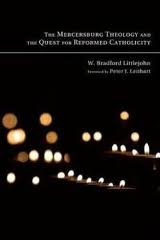 The Mercersburg Theology and the Quest for Reformed Catholicity.

In recent years there has been a growing interest in Mercersburg Theology among young Reformed scholars.  Why the interest in a “dinky little German seminary, and its two underpaid and unrenowned teachers”? (p. 170)  The answer lies in the growing pained awareness of modern Protestantism’s dysfunctional and fractured state.  W. Bradford Littlejohn found in Mercersburg Theology a corrective to the “low sacramentology and ecclesiology” popularized by Charles Hodge and Princeton Seminary (p. 18).

The book is organized along the lines of seven chapters.  The first three provide an introduction to Mercersburg Theology.  Chapter 3 provide an insightful discussion of the clash between John Nevin and Charles Hodge.  Where Hodge defined Christianity as a system of doctrine, Nevin insisted that it was life in Christ (p. 83).  Where Hodge’s dualism led him to view the church as being the invisible church, Nevin insisted that the church was a visible organic reality (p. 78).  These are especially helpful for Reformed Christians who are wondering if something has gone horribly wrong with Calvinism and/or Evangelicalism.

In the next three chapters Littlejohn utilizes Mercersburg’s catholicity to enter into ecumenical dialogue with the Anglican, Eastern Orthodox, and Roman Catholic traditions.  What makes the book so pertinent to this blog is Chapter 5: “Facing East: Mercersburg and Eastern Orthodoxy.”

Littlejohn notes that there is no direct historical connection between Mercersburg and Eastern Orthodoxy.  Despite the lack of direct connections, he finds common ground in the way Nevin and Schaff understood soteriology, more specifically with respect to the Incarnation, the mystical union, and theosis.  Nevin’s understanding of salvation as union with Christ and as a lifelong process of growth and transformation places him much closer to the Eastern Orthodox doctrine of theosis than the Protestant emphasis on justification.

Littlejohn facilitates conversation between the two traditions through clarification of differences.  He draws our attention to Donald Fairbairn’s observation that where the West understands grace as God’s attitude towards us, the East understands grace as God giving us himself (pp. 137-138).  This insight sheds light on one of the presuppositional differences between the two traditions.

I was surprised to find so little attention given to Nevin’s teaching on the mystical presence in the Eucharist.  Nevin’s defense of Calvin’s affirmation of the real presence is what got me interested in Mercersburg Theology and it provides an obvious link to Eastern Orthodoxy.  But Littlejohn makes clear that his intent has been to focus on an area where the two traditions rarely see eye-to-eye (p. 146).  In this he is right because agreement on the sacraments contains the danger of superficial agreement that leads to Anglican comprehensiveness where the same sacraments are celebrated while the celebrants hold to differing interpretations.  By exploring the organic and dynamic nature of salvation in Christ and how it relates to the Orthodox doctrine of salvation as theosis Littlejohn has boldly attempted to construct a theological bridge across one of the widest divide between the two traditions.

Littlejohn’s citations show that he has read and carefully digested the writings of contemporary Orthodox theologians: John Meyendorff, Georges Florovsky, Kallistos Ware, Christoforos Stavropoulos, and Bradley Nassif.  He also draws upon Reformed theologians, like Fairbairn, who shows an empathetic understanding of Orthodoxy.

Are there any shortcomings in Littlejohn’s book?  I wished that he had given more attention to Schaff’s dynamic Hegelian understanding of church history which I’m sure many Orthodox will take issue with.  Schaff’s version of church history has implications for how we understand Christian unity.  Also, any sustained dialogue between the Reformed and Orthodox traditions will have to address the Filioque controversy that divides the West from the East.  Discussing the Filioque will take us into the areas of how we understand the Trinity, the role and authority of the Ecumenical Councils, and the differences between the cataphatic and apophatic ways of doing theology.

The Reformed community is undergoing a revival of sorts as evidenced by Christianity Today’s article: “Young, Restless, Reformed.”  It is also undergoing a fermentation of sorts as young Reformed scholars like W. Bradford Littlejohn and Jonathan G. Bonomo embrace the Mercersburg vision of a catholic and high church Reformed tradition.

Mercersburg Theology brings to light the fact that the Protestant Reformation is a far richer and complex tradition than many Evangelical and Reformed Christians think.  It is hoped that an appreciation of the catholicity of the Reformed tradition will stimulate further dialogue between the Reformed and Orthodox traditions.

One last caveat, Littlejohn’s slim work is just an introduction to Mercersburg Theology.  Those who embrace the Mercersburg vision will need to read Nevin and Schaff for themselves.  This is now possible thanks to the Internet resources provided by the Mercersburg Society.  Even then, Nevin and Schaff are interpreters of Calvin and the Reformers.  Being more solidly grounded in the sources of their faith tradition  — the Reformers and the early Church Fathers — will enable Reformed Christians to enter into an informed dialogue with Eastern Orthodox Christians.

See also the comments on Goodreads.com.