I received this message from Tudor Petcu, a graduate of the Faculty of Philosophy, University of Bucharest, Romania.

My name is Tudor Petcu, I am a Romaniam writer and I want to post my message here because I wish to invite anyone of you who have chosen the conversion to Orthodoxy to give me his testimony. I am working on a book which contains testiomonies from different Westerns converted to the Orthodox Church, that’s why I invite you to become a part of my project. I also have to mention the the book (first volume) will be published by the end of this year.
For some more information about my book and the interview, please contact me via email: petcutudor86@gmail.com I would be very delighted to make contact with more and more Westerns converted to Orthodoxy because everyone’s story is very charming.

I’m guessing that there are a few readers out there who have made the decision to convert to Orthodoxy.  If you want to share your story how you became Orthodox, this looks like a good opportunity.

Those desiring more information about Tudor Petcu and his ministry should read his recent article “Orthodoxy and Philosophy: An Interview with Travis Dumsday” in Journey to Orthodoxy and the website studia humana. 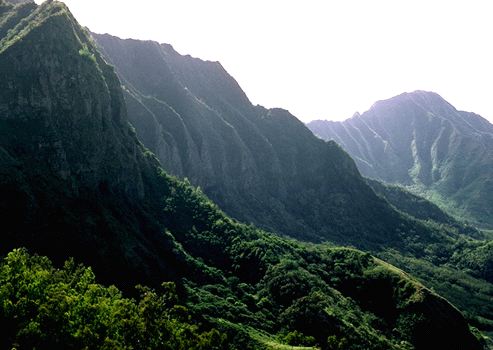 I am taking a blog vacation.  I am using this as an opportunity to attend to other writing projects and to recharge my batteries.  One of my writing projects involves a book manuscript based on some ideas presented on this blog.

Some blogs are written as quick peppy pick-me-ups, while others are intended to be academic pieces written to serve a long term purpose.  The intent of this blog has been to explore issues and topics that intersect between the Reformed and Orthodox traditions.  I invite you to reread my articles. Click on the tabs under the banner:

I also invite readers to suggest ideas for future articles.  You can submit them as title ideas or in the form of questions in the Comment box.

There is an unspoken pressure in the blogosphere to produce content frequently and rapidly. A blogger can easily obsess about maintaining traffic and visits to the site.  This kind of pressure is not conducive to spiritual well being.  I am encouraged that other blog writers I admire are taking a break.  I recommend the Rev. John Armstrong’s “Blog and My Public Life” and Pastor Trevin Wax’s “Taking a Break and Asking for Prayer.”

The Internet is a place where exciting conversations happens.  It is also a place of intense pressure and seduction.  To recover one’s inner equilibrium and the well being of one’s soul it is good to step away from the computer, step out into the sunlight, walk under the shade of the trees by flowing streams, spend time with friends and family, and to reflect on Scripture and turn to God in prayer.

But his delight is in the law of the Lord,

And on his law he meditates day and night.

He is like a tree planted by streams of water,

Which yields its fruit in season

Thank you and God bless!

What American Orthodox Believe: A Survey

A frequent visitor “Prometheus” posed a very good question with respect to my posting “An Orthodox Remedy to Evangelicalism’s Heresy Epidemic.”  He asked:

My question is what such a survey would look like in Orthodoxy. Protestants lack certain epistemological bases for their teaching, but the very act of teaching has the chance to provide a lot agreement on “orthodox” issues. The epistemology and the application ore two different issues, and I am interested to know what the orthodoxy of the Orthodox looks like on average.

The best answer I can find is Alexei Krindatch’s report The Orthodox Church Today.   It is based on survey research done with some 1000 people from 103 parishes in the Greek Orthodox of America (GOA) and the Orthodox Church in America (OCA) (p. 5).  The survey is relatively recent having been done between September 2007 and May 2008.

The survey provides an insightful peek into the empirical reality of Orthodoxy in America — what real flesh and blood Orthodox Christians believe as opposed to the official teachings of the Orthodox Church.  It is important to keep in mind that the questions asked by Alexei Krindatch’s survey for the Patriarch Athenagoras Orthodox Institute differ from that posed in Stephen Nichol’s survey done by LifeWay Research for Ligonier Ministries.  Below are screen shots of tables showing the various survey results and a few comments on how these bear on Prometheus’ question.

How Orthodox are American Orthodox?

Unlike the Lifeway survey of American Evangelicals which asked a number detailed doctrinal questions, the Orthodox survey combined questions of doctrine with orthopraxy (right practice).   It found that nearly all respondents affirmed Jesus’ bodily resurrection (98%) and the doctrine of the real presence in the Eucharist (97%).  What is striking about the survey research is that when it comes to doctrine, both cradle Orthodox and converts are on the same page; the difference being 1% or less.  With respect to orthopraxy converts tend to be more conservative than cradle Orthodox. 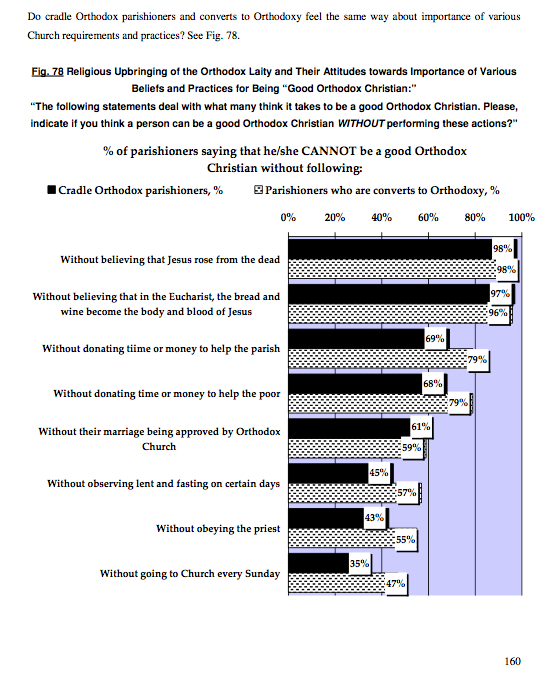 How Many Believe the Orthodox Church is the True Church? 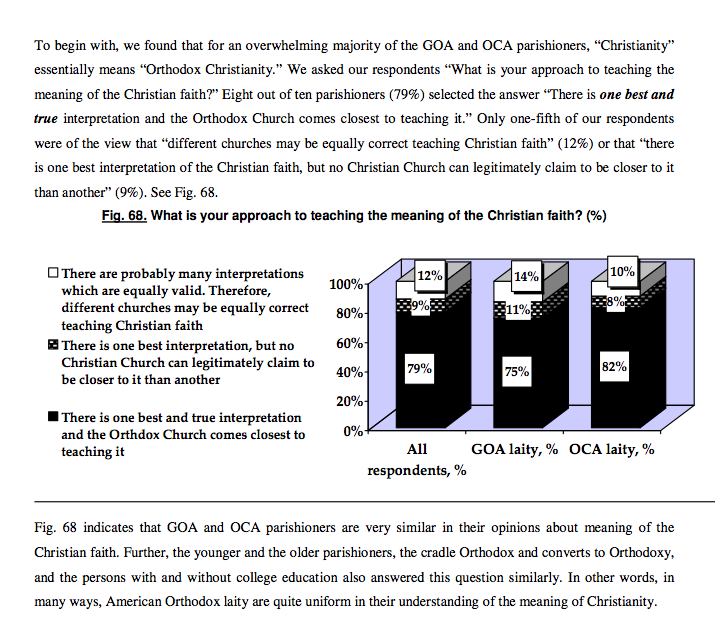 One interesting question in Krindatch’s survey was how Orthodox Christians identified themselves on a scale from liberal to conservative with respect to church life.  It may surprise some that the “liberal” Orthodox are a very small minority, 4%.  But while the “liberals” are those who favor change in the Orthodox church, the “moderates” who are open to change make up nearly a quarter of the respondents.  Probably, the most significant finding is that a strong majority (almost 70%) identify themselves as either “traditional” or “conservative.”  This point to a strong sense of stability in American Orthodoxy.  (Figure 5, p. 14) 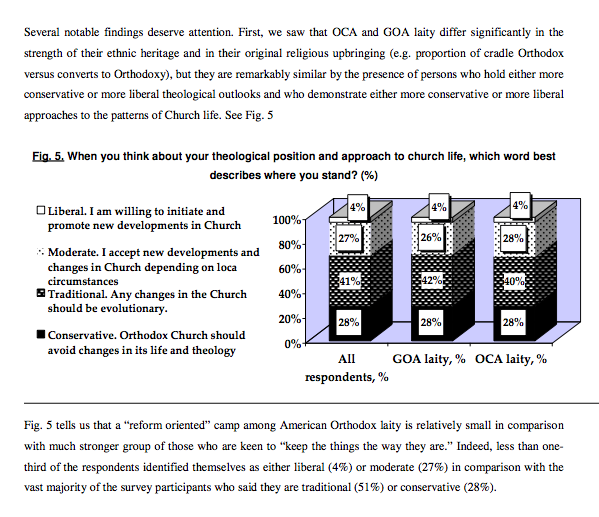 Self-Confidence in Explaining Orthodoxy to Others

There is a stereotype of the typical Orthodox Christian not being able to explain what he or she believes to others.  It is a pleasant surprise that nearly half of Orthodox Christians who have not had a college education and slightly more than two thirds of those who graduated with a college degree feel confident to explain Orthodoxy to others.  The flip side of this is that nearly a quarter of those with a college degree and slightly more than a third did not share this confidence.  While there is room for improvement in Christian education among American Orthodox, the stereotype of an inarticulate Orthodox is largely a myth.  (Figure 71, p. 151) 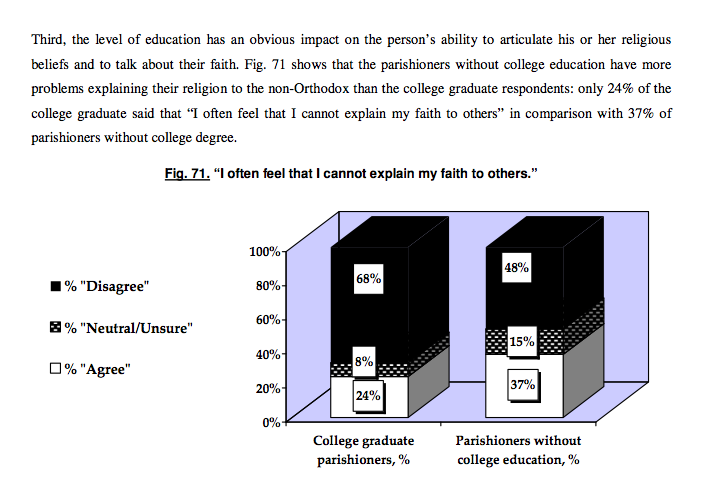 Survey research questions about theology like that asked of American Evangelicals while helpful have in-built limitations from an Orthodox standpoint.  Orthodoxy does not give rote “propositional truth” statements the same kind of premium as does Protestantism. So it is not as critical for an Orthodox believer to be able to spit out the “right answer” to all theological questions.  That said, an Orthodox Christian is expected to have self-consciously embraced the Creed and Councils of the Church as providing a fence against heresies.  This fence prevents the theological free fall so often seen in Protestant circles. Neither of these are a substitute or excuse for weak understanding of the faith among Orthodox.