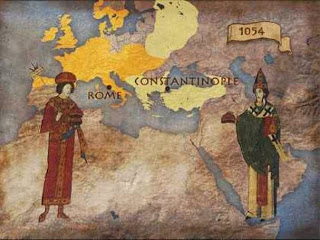 On several occasions, I have read comments by Calvinists and Evangelicals who expressed anger and disappointment on not being taught about the early Church and Orthodoxy while in seminary. I was fortunate that I had more than a little exposure to the early Church and the Church Fathers at Gordon-Conwell Theological Seminary. So I was intrigued when a reader brought to my attention Gordon-Conwell professor Ryan Reeves’ lecture on the Great Schism of 1054. 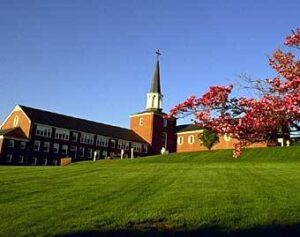 As one who once identified with the Reformed tradition then later converted to Orthodoxy, I wondered how balanced the presentation would be. My intent in this article is not so much to criticize as to provide positive feedback so that Prof. Reeves could give his students a more balanced approach (at least from my perspective) to the Great Schism of 1054. It would be as if I had returned to Gordon-Conwell for a one-day visit and dropped in on this particular topic which is of great interest to Christians concerned with church history and church unity. 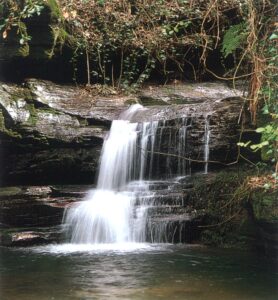 Article: “Pentecost – The River of God Flowing Through History”

It is tragic that the 1054 Schism is so often ignored, or at best, given brief mention in most Protestant and Evangelical circles. It serves as evidence that in the Protestant perspective, church history is not viewed as the Holy Spirit working in the Church—at least in the sense of a continuing Pentecost. This presupposition adds up to a secularization of the Church on earth. To say the least, it inculcates a very different mindset toward Church history and the presence of the kingdom of God on earth.

Prof. Reeves commendably debunks the stereotype of the Patriarch of Constantinople as the pope of the East. This stereotype is contrary to the East’s principle of conciliarity or as Reeves puts it aptly: “collaborative unity.” Reeves notes that the Second Ecumenical Council—the Council of Constantinople (381)—established five principle ecclesial seats or patriarchates (12:42; chart at 13:00). The understanding was that these church leaders would supposedly be first among equals. The East’s “collaborative unity” is quite different from the West’s centralized approach to unity that would mark the later papacy. Reeves sees as the “kernel of the fight” the issue of authority, more specifically the role of the Pope—the bishop of Rome in relation to the other Patriarchs (12:42; see chart at 15:45). It would have been good if Prof. Reeves had noted how the episcopacy was foundational to the polity the early Church and how so much of present day Evangelical churches follow a radically different polity.

The roots of the East-West Schism can be seen in the rivalry between the Old Rome and the New Rome aka Constantinople. Once the center of the Roman world, Rome went into decline and in 410 was sacked by Alaric the Visigothic king–an event that shocked and horrified the whole Roman world. With the decline of Old Rome a power vacuum emerged that would be filled by the bishop of Rome, i.e., the papacy. The political gravity shifted to Gaul with the emergence of Charlemagne. In his attempt to restore the Roman Empire in the West and to consolidate his rule in that sphere, Charlemagne referred to the leaders in the East as “Greeks.” This marked the West’s attempt to withstand Constantinople’s asserting its role as the successor to Old Rome.

Charlemagne’s semantic shift in the term “Greek” was designed to make people conscious of a growing divide in the Roman world. It highlighted the fact that there were two major languages—Latin and Greek–in the Roman Empire. This linguistic difference did not matter so long as there were bilingual theologians and rulers. However as the linguistic divide grew, prominent theologians, e.g., Augustine of Hippo, would be unable to read Greek and so had limited exposure to the thinking of the Greek Fathers. This difference in language would contribute to theological differences between the Latin West and the Greek East

One of the most prominent theological issues that led to the 1054 Schism was the Filioque—the unilateral insertion of the phrase “and the Son” into the Nicene Cred. What may seem to be an arcane point of theology for Evangelicals and Protestants today is very pertinent for Orthodox Christians. The Filioque marks the parting of ways between Orthodoxy and Christians of the West: Roman Catholics and Protestants.

Prof. Reeves notes that in the West Arianism was spreading among the Gothic tribes. This gave rise to concerns that the Nicene Creed could be misunderstood to teach that the Son and the Spirit were created, not eternal (19:42). The phrase “and the Son” (Filioque) was inserted into the Creed around the sixth century (20:51) to combat the Arian heresy. Reeves explained that by affirming that the Son was of equal standing with the Father with respect to the procession of the Holy Spirit the divinity of the Son could be maintained (21:27).

Underlying the insertion of the Filioque clause was the issue of authority, more specifically, the Pope’s doctrinal authority. Prof. Reeves points out that the West—the Pope–was saying: “We’re going to change the Creed—add to it in order to clarify the theology of the Creed in the midst of our context.” (22:10-16) When the East began to notice the West’s unilateral revision of the Nicene Creed they objected vociferously (22:25). For them, it was only in the context of a council of bishops (plural) that the Creed could be modified (22:32). Reeves goes on to note that the West’s response was that the papacy had decreed this and therefore it is good theology (22:45). Here I was very surprised. I had never heard of such a papal decree or of such a claim being made. It would be good if Prof. Reeves could provide us with the supporting reference for this.

It would have been good if Prof. Reeves had noted that early on there were Popes—Leo III (795-816)—who had objected to the insertion of the Filioque into the Nicene Creed and that it was not until 1014—at the coronation of Henry II as Holy Roman Emperor—that the Filioque was inserted into the Creed at a papal Mass. In other words, there was a time when the popes held views similar to the East on the Filioque. Since this was a church history lecture, Prof. Reeves should have mentioned that the Filioque clause was first inserted into the Nicene Creed at the Council of Toledo in 589 at the prompting of King Recared who had just converted from Arianism and embraced Nicene Orthodoxy. The revision of Nicene Creed in 589 was done by a minor regional council. This contrasts with the Nicene Creed which was formulated by the numerous bishops at two Ecumenical Councils: Nicea I (325) and Constantinople I (381).

In 1053, Western cardinal of Silva Candida, Humbert, received a letter from an Eastern bishop, Leo of Ochrid, who condemned the West for the Filioque clause and for their practice of using unleavened bread for the Mass (27:28). Humbert then makes a trip to Constantinople to present his objections to the Patriarch of Constantinople, Michael Cerularius. Reeves describes the 1054 event as “two egomaniacs throwing temper tantrums at each other” (28:10). Granted that both parties behaved deplorably and inexcusably, however, Prof. Reeves’ colorful characterization of what he calls the “bozo factor” is unfortunate. While caricature can be entertaining and memorable, it is similar to ad hominem attacks. 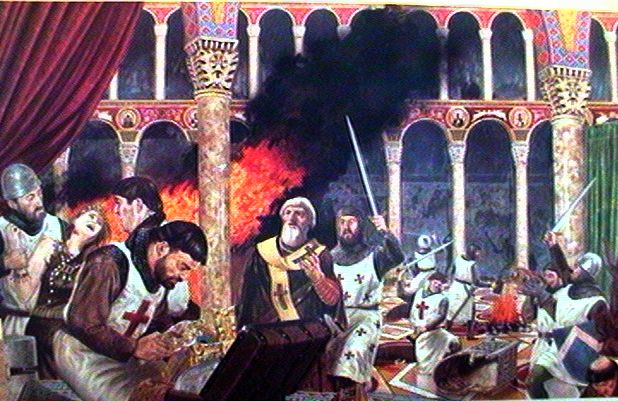 The 1054 Schism was more a paradigmatic event than the actual breaking point. What happened that day—Saturday, 16 July 1054–highlighted the differences between the East and West, burning them into the collective memory. Towards the end of his half-hour lecture Prof. Reeves drastically compresses the unfolding of the Schism—apparently he is rushing to windup his lecture. He notes that the participants in the 1054 incident did not view it as a momentous act that would sunder the West from the East. He mentions the Fourth Crusade (30:10)—a far more disruptive event for West-East relations. One could say that the pillage of Constantinople by the western Crusaders in 1204 was the straw that broke the camel’s back estranging the East from the West. What happened in 1204 was more a political act than a theological one. Kallistos (Timothy) Ware wrote concerning the aftermath of 1204:

The long-standing doctrinal disagreements were now reinforced on the Greek side by an intense national hatred, by a feeling of resentment and indignation against western aggression and sacrilege. After 1204 there can be no doubt that Christian east and Christ west were divided into two. (The Orthodox Church p. 60).

Prof. Reeves might also have touched on the influence of Augustine of Hippo’s teaching on the double procession of the Holy Spirit as the reason why so much of Roman Catholicism and Protestantism hold on so tenaciously to the Filioque clause. However, Augustine’s understanding of the Trinity does not represent the patristic consensus. His understanding differs from that of the Cappadocian Fathers: Basil the Great, Gregory of Nyssa, and Gregory Nazianzen, who stressed the monarchy (monos = sole + arche = source) of the Father, that the Son being eternally begotten of the Father and the Holy Spirit proceeding eternally from the Person of the Father. In other words, the understanding of the Trinity found in Augustine and the Filioque clause represent a minority viewpoint in the early Church.

Any good church history professor worth his salt will seek to relate the past to the present. The importance of the Nicene Creed—more accurately the Niceno-Constantinopolitan Creed—is that if was the Creed for all Christians—East and West. For the students at Gordon-Conwell the question must be posed: Why is it that so many present-day Protestants and Evangelicals do not say the Nicene Creed in their Sunday worship when it was the standard practice back then? And for the Protestants and Evangelicals who do recite the Nicene Creed the question must be posed: Why do they use the version with the Filioque clause? I often tease my Anglican friends for using the papal version of the Nicene Creed. But I am mystified by the reluctance of so many Anglicans to relinquish the Filioque clause and return to the original version of the Nicene Creed.  The return to the universally recognized Creed of the early Church would mark a significant step towards church unity. This tenacious adherence to the Filioque shows how much the 1054 Schism continues to influence relations among Christians today.

In closing, I appreciate Prof. Ryan Reeves presenting the complexity of the 1054 Schism. The only major disagreement I have with his lecture is his characterization of Cardinal of Silva Candida, Humbert, and Patriarch of Constantinople, Michael Cerularius, as “bozos.” I have three suggestions for his 1054 Schism lecture: (1) placing greater stress on 1054 as a paradigmatic event, not as the moment of actual schism, (2) showing how the events of 1054 affect twenty-first century Christians, and (3) using the 1054 Schism to help Gordon-Conwell students become aware of how far present-day Evangelicalism and Protestantism have parted ways with early Christianity.

Athanasios Philippides. “The Days of the Schism of 1054.”
Orthodox Church in America. “The Great Schism.”
Steven Runciman. The Eastern Schism.
Timothy (Kallistos) Ware. The Orthodox Church.