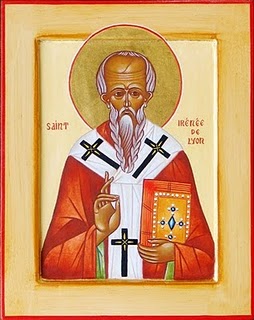 2. Are you contradicting the above statement of Irenaus [sic] which says the Scriptures are “the ground and pillar of our faith” or do you equate the later corpus of the Fathers and the body of oral (and mostly liturgical) tradition with Scripture?

Answer: It is good that Mr. Roxas cited Irenaeus of Lyons, an early Church Father, who wrote:

We have learned from none others the plan of our salvation, than from those through whom the Gospel has come down to us, which they did at one time proclaim in public, and, at a later period, by the will of God, handed down to us in the Scriptures, to be the ground and pillar of our faith. (Against Heresies 3.1.1; ANF p. 414; emphasis added)

However, Mr. Roxas made the error of cherry-picking a quote of a Church Father in order to claim support for the doctrine of sola scriptura, while ignoring other passages that support Apostolic Tradition. In the quote provided by Mr. Roxas, Saint Irenaeus noted that the Gospel was first proclaimed orally, then later transmitted in writing, but nowhere did he put the written Apostolic teaching over the oral proclamation.  Consider also the following quotes from Irenaeus in the passage that follows the one cited by David Roxas.

In the next chapter, we see Irenaeus affirming Apostolic Tradition — “that tradition which originates from the apostles.”

2. But, again, when we refer them to that tradition which originates from the apostles, [and] which is preserved by means of the succession of presbyters in the Churches, they [Gnostics] object to tradition, saying that they themselves are wiser not merely than the presbyters, but even than the apostles, because they have discovered the unadulterated truth. (Against Heresies 3.2.2; ANF p. 416; emphasis added)

1. It is within the power of all, therefore, in every Church, who may wish to see the truth, to contemplate clearly the tradition of the apostles manifested throughout the whole world; and we are in a position to reckon up those who were by the apostles instituted bishops in the Churches, and [to demonstrate] the succession of these men to our own times . . . . (Against Heresies 3.3.1; ANF p. 416; emphasis added)

The danger of cherry-picking the Church Fathers is that an isolated sentence can be misread and made to support the Protestant position.  This is why it is important that the early Church Fathers be read in context.  At the beginning of the third book of Against Heresies, Irenaeus recounts how he sought to refute the Gnostic heretics.  First, he appeals to Scripture, which is written Apostolic Tradition.  When that does not work, then he appeals to oral Apostolic Tradition – an approach different from Protestantism’s sola scriptura!  Irenaeus treats written and oral Apostolic Tradition as equal and complementary to each other.

One might argue that Irenaeus was advocating sola scriptura when he referred to Scripture as the “ground and pillar of our Faith,” but then we must also take into account the witness of Scripture.  In 1 Timothy 3:15 Apostle Paul referred to the Church as the “pillar and foundation of the truth.”  We find no historic reference of a breach between the Apostle Paul and Irenaeus. Rather, the Church’s magisterium (teaching authority) is complementary to Scripture as the source of Christian doctrine and practice.

Mr. Roxas asked: 2. “Are the writings of the Fathers and the liturgy of the church ‘theopneustos?’ [God-breathed]”

Answer: Yes. If we believe that Christ bestowed the Holy Spirit on the Church at Pentecost (Acts 2) and that as a consequence of Pentecost there is a charismatic gift of teaching (1 Corinthians 12:28, Ephesians 4:11, Romans 12:7) then we must conclude that the gift of teaching is inspired by the Holy Spirit.  This is the basis for Orthodoxy’s understanding that the writings of the Church Fathers are inspired by the Holy Spirit. Without this belief that the Holy Spirit is at work in the Church, we are left with the situation of fallible men doing their best figuring out what Christ’s words and the later epistles meant.  Or worse yet, that the Church suffered a catastrophic fall into spiritual darkness early on.

Second, much of the Liturgy is either Scripture or paraphrase of Scripture.   The Sunday Eucharist should be seen as a continuing Pentecost flowing from Acts 2 down through history for two thousand years until today.  Since it is impossible to confess that Jesus is Lord without the Holy Spirit (1 Corinthians 12:3) or to pray without the Holy Spirit (Ephesians 2:18), we can only conclude that our worship in the Sunday Liturgy is inspired by the Holy Spirit.  So, the answer to Mr. Roxas question is: “Yes” and “Yes.”

Irenaeus and the Confession of Dositheus

How does the Confession of Dosiethus [sic] agree with Irenaus [sic] when said confession is adamant that Christians should not read the Scriptures because they are obscure and require initiation into the secrets of theology?

Answer: David Roxas’ question here assumes that Irenaeus and the Confession of Dositheus are at odds with each other. (Note: In 1672, the Orthodox Church issued the Confession of Dositheus which formally condemned Reformed theology.) However, as noted earlier, Mr. Roxas took Irenaeus out of context and misconstrued him to teach sola scriptura (Against Heresies 3.1.1). The larger context of Against Heresies shows that Irenaeus believed that Scripture must be understood with Apostolic Tradition (Against Heresies 3.2 & 3.3).

Similarly, it is important that we read and understand the Confession of Dositheus (1672) in context.  The excerpt below is taken from the response to Question 1: “Ought the Divine Scriptures to be read in the vulgar tongue by all Christians?”

No. Because all Scripture is divinely-inspired and profitable {cf. 2 Timothy 3:16}, we know, and necessarily so, that without [Scripture] it is impossible to be Orthodox at all. Nevertheless they should not be read by all, but only by those who with fitting research have inquired into the deep things of the Spirit, and who know in what manner theDivine Scriptures ought to be searched, and taught, and finally read. But to those who are not so disciplined, or who cannot distinguish, or who understand only literally, or in any other way contrary to Orthodoxy what is contained in the Scriptures, the Catholic Church, knowing by experience the damage that can cause, forbids them to read [Scripture]. Indeed, it is permitted to every Orthodox to hear the Scriptures, that he may believe with the heart unto righteousness, and confess with the mouth unto salvation {Romans 10:10}. But to read some parts of the Scriptures, and especially of the Old [Testament], is forbidden for these and other similar reasons. For it is the same thing to prohibit undisciplined persons from reading all the Sacred Scriptures, as to require infants to abstain from strong meats. (Emphasis added.)

The first thing to note from this excerpt is that the Confession of Dositheus affirms the divine inspiration of Scripture.  The second thing to note is that all Orthodox Christians are permitted to hear the Scriptures: “it is permitted to every Orthodox to hear the Scriptures.”  This makes sense as one cannot avoid hearing the Scriptures read out loud during the Sunday Liturgy.  If one listens attentively to the hymns and prayers in the Liturgy, one will learn to understand the Bible in accordance with the teachings of the Church.  This might rub certain Protestants the wrong way, especially those who have the attitude: “Nobody can tell me what the Bible means; I can read the Bible for myself.”  The third thing to note is that the Confession recognizes that without the proper training and education, one could very well end up misreading Scripture and teaching heresies.  This agrees with what the Bible clearly teaches in 2 Peter 3:16 in which the Apostle Peter wrote:

He [Apostle Paul] writes the same way in all his letters, speaking in them of these matters.  His letters contain some things that are hard to understand, which ignorant and unstable people distort, as they do the other Scriptures, to their own destruction. (Emphasis added.)

Here the Apostle Peter acknowledges that people who lack the necessary preparation are likely to misinterpret the meaning of Scripture.  It is important to keep in mind that this passage in the Confession of Dositheus was in reaction to the plethora of strange readings of Scripture coming out of the Reformation that the Orthodox bishops in the 1600s found at odds with Holy Tradition.  Thus, the stress on the need for supervised reading of Scripture is well founded.

The account of the Ethiopian eunuch in Acts subverts sola scriptura.  In response to Deacon Philip’s question: “Do you understand what you are reading?,” the Ethiopian answered: “How can I unless someone explains it to me?” (Acts 8:31-32)  Here we have a literate and pious man requesting help to rightly understand God-breathed Scripture.  Note that Philip did not advocate the sola scriptura approach – that all Scripture being God-breathed is perspicuous (clear in meaning) and that all that is needed for right understanding is more prayer or more careful study of Scripture.  Instead what we see here is an ordained clergyman – Philip was ordained to the office of deacon in Acts 6:5 – giving him the authoritative Apostolic interpretation of Scripture.  Philip as a deacon was part of the Apostolic traditioning process.

So my answer to Mr. Roxas’ question is: There is no disagreement between Irenaeus and the Confession of Dositheus to begin with.  Both affirm that Scripture must be read in the context of Tradition.  The Confession’s strictures on the reading of Scripture make sense in light of the misreadings then stemming from the Protestant Reformation which was causing confusion and conflict in the Christian world.

In conclusion, Irenaeus of Lyons did not teach sola scriptura.  Rather, he taught Scripture-in-Tradition which is the Orthodox Church’s approach to the Bible.  Given that Irenaeus was the disciple of Polycarp, who in turn was the disciple of the Apostle John, and in light of Irenaeus’ reputation as the leading theologian of the second century, Protestants need to reconsider their position on sola scriptura.

Confession of DositheusIrenaeus of Lyons