This article is the third of a four part series in response to James White’s 13 April 2017 podcast: “Can a Consistent Eastern Orthodox Believer Be the Bible Answer Man?”  For my previous responses, please see: “Response to James White” (1 of 4) and (2 of 4).  The purpose of these articles is not to defend Hank Hanegraaff, but to promote good reasoning and courteous interaction between Protestants and Orthodox.

Why the Church Fathers Matter

The early Church Fathers are a valuable resource for understanding the historic Christian Faith.  For this reason, they have been a frequent topic of discussion between Reformed and Orthodox. Protestants are to be commended for utilizing the Church Fathers, however, due to their lack of familiarity with the Church Fathers Protestants often misread them or take them out of context. In this brief article, I point to one error by James White and another error that I noticed come up quite often in Protestant-Orthodox dialogue.

Cherry picking the Church Fathers – At the 17:25 mark, James White cites Irenaeus of Lyons’ idiosyncratic hypothesis that Jesus died at the age of 50 as evidence against Tradition.  First, he has apparently overlooked Mr. Hanegraaff’s qualifying statement that the Church Fathers individually are fallible (17:19) Second, he is cherry picking the Church Fathers.  Mr. White apparently is unaware of the importance Orthodoxy places on the patristic consensus.  This is the understanding that while Church Fathers may be fallible individually, their collective witness to Tradition is considered infallible. This belief is based on Christ’s promise that He would send the Holy Spirit to guide the Church into all truth (John 16:13) and the teaching ministry as charismatic gift to the Church (Ephesians 4:11). 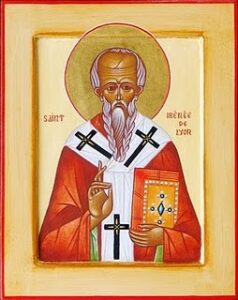 Proof texting the Church Fathers – One commenter (Geoff) made a mistake similar to Mr. White’s mishandling of Irenaeus (my response: here).   He cited Irenaeus of Lyons to support Protestantism’s sola scriptura.

We have learned from none others the plan of our salvation, than from those through whom the Gospel has come down to us, which they did at one time proclaim in public, and, at a later period, by the will of God, handed down to us in the Scriptures, to be the ground and pillar of our faith. Against Heresies 3.1.1

In this particular sentence one could get the impression that what Orthodoxy refers to as Tradition” is identical to Scripture.  However, the surrounding context, especially Against Heresies 3.2.1-2, shows that Irenaeus believed in the complementarity of Scripture and Tradition.  A single quote from one Church Father is not sufficient.  One needs to read a Church Father’s writings in context, then in light of the patristic consensus.  Proof texting is often a sign of laziness and intellectual arrogance, and therefore to be avoided by those who love God’s truth.