As I listened to James White’s 13 April 2017 podcast “Can a Consistent Eastern Orthodox Christian Be the Bible Answer Man?,” I was struck by the numerous fallacies that so often mar Protestant critiques of Orthodoxy.  The quotes below are organized topically, not chronologically.  The intent here is to promote good reasoning and courteous interaction in Protestant-Orthodox dialogue. Please see my earlier posting: “How NOT to Do Anti-Orthodox Apologetics” for a description of fallacies and faulty reasoning.

At the 3:39 mark, James White brings up one of Protestantism’s core doctrines sola fide – justification by grace alone through faith alone.  He insists that the omission of that one word “alone” opens the door to the legalism and works righteousness of Roman Catholicism.  Here we see the conflating of two fallacies: hasty generalization and false equivalence.  Just because Orthodoxy refrains from using “alone,” that does not mean that their reasons are the same as or identical to Roman Catholicism.  First, it must be shown what the Orthodox understanding of salvation actually is.  Second, that doctrine must be compared with the Roman Catholic understanding to see if they are identical. They are not — as any historic theological investigator without an axe to grind will quickly see.  By casting the question in terms of Protestantism versus Roman Catholicism, Mr. White presents the listener with a false dilemma.  This is the fallacy where something is presented as an either-or situation, when in fact there is one additional option.

Flesh it out!  They didn’t at that point.  That’s why it isn’t sufficient.  If you say that’s the basis for mere Christianity then there’s no place for the Gospel.

For James White, because the Fathers at the Council of Nicea failed to articulate sola fide the Nicene Creed is theologically insufficient. Here he passes judgment on the universal confession of the Early Church! By what standards? By that of the sixteenth century Reformation?!?!

At the 1:10:05 mark, Hank Hanegraaff is heard saying that he has been saved “by grace alone through faith.”  Here James White leans eagerly on the edge of his chair then theatrically slumps in disappointment when he does not hear the word “alone.” He notes:

When James White (or anyone else) asserts: “there’s no place for the Gospel,” he commits the false dilemma fallacy presenting the listener with a stark black-and-white choice between salvation and damnation. When Mr. White insists that the Gospel be understood in terms of “justification by faith alone,” he makes the false equivalence fallacy.  Sola fide here is presented as the untouchable touchstone for true Christianity.  It may be for Protestants, but did any of the Church Fathers make a similar assertion? Was sola fide part of the historic Christian Faith?

In Protestant-Orthodox dialogue sola fide must be proven from Scripture, not just from the biblical text but from the way the text has been understood historically.  It should be kept in mind that Protestant Reformer John Calvin had no qualms about citing the Church Fathers.  Calvin was not a simple-minded Fundamentalist.  It must be shown how the doctrine “salvation through grace alone by faith alone” is the core meaning of what Apostle Paul in Galatians 1:6-9.  At 1:45:48-1:46:01, James White interjects:

And wouldn’t you say that in light of Galatians chapter 1 that justification is one of those dividing lines? . . . . It’s right there: “Let him be anathema.”  False brethren.  You can actually make an argument. ??  There’s stronger evidence that that was an apostolic dividing line. 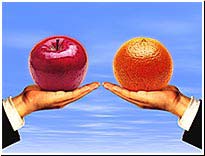 Protestants often fall into the false analogy fallacy when they assume that Paul’s argument with the Judaizers about the Jewish Torah in first century Asia Minor is the same as the Protestant-Catholic controversy over earning merits in sixteenth-century Europe.  While there are overlaps in terminology, the issues and contents of the two debates are significantly different.

See Seraphim Hamilton’s “Those Whom He Justified He Glorified: Paul’s Argument in Romans 1:17-3:31.” On Behalf of All.

These articles show how Mr. White’s false dilemma of Protestant versus Roman Catholic understanding of justification by faith oversimplifies the theological issues within Paul’s letters to the Romans and Galatians.  He compounds the confusion through the false equivalence fallacy: Orthodoxy = Roman Catholicism.

In closing, Orthodoxy must be treated by Protestants as a faith tradition distinct and separate from Roman Catholicism.  While they have much in common, they also diverge significantly. Furthermore, Protestants cannot take sola fide (justification by faith alone) for granted in Reformed-Orthodox dialogue. Does the phrase “faith alone” appear in the Bible?  Where?  Did the early Church Fathers universally teach justification by faith alone? One cannot cherry pick the Church Fathers. To persuade the Orthodox, Protestant apologists need to show that justification by faith alone was part of early Christianity, not a sixteenth century doctrinal innovation.  As they dialogue with the Orthodox, Reformed Christians and other Protestants need to be open to the historic Christian Faith as understood by the Orthodox.  Let’s have a frank and friendly dialogue!