How The Reformation Continues To Fail 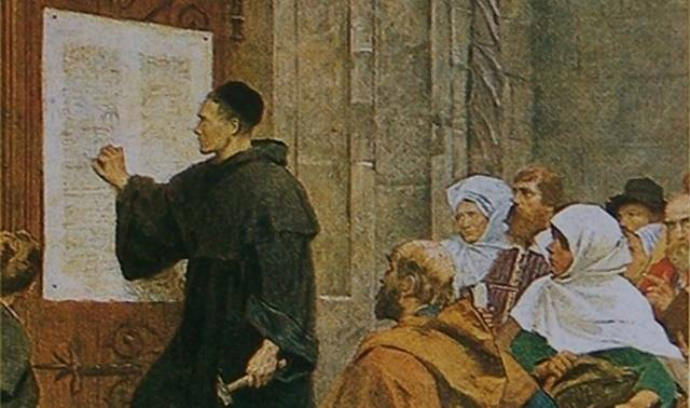 A Reply to Dr. Peter Leithart’s “How the Reformation Failed.”

The Reformers did not start out with a plan to establish separated churches. Their goal was to reform the entire Latin church. In this they failed….

Some have charged that the Reformers were willing to split the church because they had little interest in visible unity, but that is false. All the Reformers and all Protestant confessions stressed the unity and catholicity of the church. Calvin lamented the “mutilation” of Christ’s body….

As Lee Palmer Wandel ( The Reformation ) has pointed out, the fragmentation of the church was pervasive, deep, and unprecedented. In 1500, the word “Christian” was univocal; by 1600, there were a variety of definitions of the word, and Christians of one sort didn’t necessarily recognize Christians of other sorts as Christians. In 1500, a Christian could travel from one end of Europe to another without fear of persecution; by 1600, every form of Christianity was illegal somewhere in Europe. In 1500, the Latin Mass was the church’s liturgy throughout Western Europe; by 1600, several different, mutually exclusive, Eucharistic liturgies were enacted across Europe.

The division penetrated to families and neighborhoods. Catholics whose children married in non-sacramental Protestant weddings considered their own grandchildren to be bastards. Time was reckoned differently in different parts of Europe: Catholics and Protestants lived in different time zones.

How did this happen? How did a Reformation committed to the gospel, catholicity, and unity shatter the Western church and European civilization?  [Source]

In his recent article “How the Reformation Failed,” Peter Leithart is right to assume Luther had no intention to create a rival Church when he posted his 95 Theses on the door of Castle Church. Yet it must be noted that in the 3⅓ years between Wittenberg (Oct. 1517) and the Diet of Worms (Jan. 1521) much had changed. Facilitated by the the printing press, Luther’s 95 Theses and other of his tracts were quickly translated from Latin into German, printed, and distributed widely across Europe. For example, Luther’s 95 Theses spread through Germany within two weeks and throughout Europe in two months!

When he attended the Diet of Worms, Luther was all but certain of his excommunication should he refuse to recant. It is most unlikely that a new Church, at least a separated National Church under his political protector, Frederick the Wise, had not occurred to him. Indeed, the Reformation must not be simplistically reduced to mere theological considerations. The political lust for power and independence was a growing presence throughout Europe’s socio-political realm at the time. In his excellent book, Rock and Sand, Fr Josiah Trenham suggests,

A strong argument can be made that the Protestant Reformation itself was more a land grab by the Protestant princes than about ecclesiastical renewal, and that without their cooperation Martin Luther would have been a flame that quickly ignited, but then rapidly dissipated. (Trenham, p. 8)

Speaking Outside the Bubble

We are thankful that Peter Leithart is a not only a scholar; he is a gentleman as well. He tries to be measured in his writing and analyses. We grant that he sees himself (as one cohort of his is apt to say) “riding the brake” on innovation. His scholarship has broadened his vision so he speaks from outside the bubble of Reformed sectarian purity. Rev. Leithart has given up the glasses of naïveté that so often prevents one from seeing the log(s) in his own tradition’s eye. This has enabled him to observe insightfully:

Yet, the Reformers eventually turned their considerable rhetorical powers against each other, creating stark polarities and treating every dispute as a cosmic war of light and darkness, truth and error. Reformation polemic descended into propaganda, which bolstered the group of identity of separated communions by demonizing other churches. For all the virtues of polemic, Lutheran and Reformed would often have been better served by gentle answers.

Remarks like these are commendable for their insightfulness and courage. 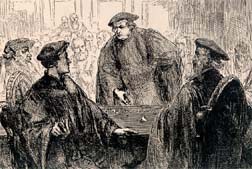 Zwingli and Luther at the Marburg Colloquy – 1529

While it is wise to see logs in our own small traditions, we must point out that Pastor Leithart remains unwilling to confront the root problem destroying ecclesiastical unity even among Protestant churches, the departing from Holy Tradition. This problem showed itself some twelve years after Luther’s 95 Theses at the Marburg Colloquy. This historic meeting between Luther and Zwingli provides tragic and telling lesson about Protestantism. Fr. Josiah Trenham’s comments are on point here:

The greatest of these [controversies] took place at the Colloquy of Marburg in 1529. This official gathering was designed to unify the Protestant theologians, but instead served to express the deepest of divisions between Luther and Swiss Reformer Ulrich Zwingli on the subject of the eucharist. Luther thought his teaching on consubstantiation was the clear teaching of Scripture, and neither could understand why the other was being so hardheaded and disobedient to the ‘clear teaching of Scripture.’ The Marburg Colloquy and Protestant eucharistic controversy revealed the greatest weakness of the Protestant embrace of the doctrine of sola scriptura, and proved the absurdity of any dependence on the clarity of Scripture alone to establish common doctrines. Luther felt very deeply on this matter, and said ‘Before I would have mere wine with the fanatics, I would rather receive sheer blood with the pope. Accomplished Protestant leaders like Carlstadt, Zwingli, Oecolampadius in Basel and Bucer in Strasbourg disavowed Luther’s teaching on the sacraments and church polity. We Orthodox Christians are led to ponder: where is the reality of sola scriptura and the perspicuity of Scripture if even those bound by faculty, friendship, politics and faith cannot agree on the meaning of the central Christian act of worship? (pp. 36, 37)

The failure at Marburg – the inability for sola scriptura to generate a unified understanding of Scripture and a shared Eucharist – has been repeated over and over in the history of Protestantism resulting not just in the shattering of church unity, but its pulverization into thousands of Protestant denominations.

Marriage Advice to a Friend

What do you say to a very likeable, knowledgeable and engaging man [hypothetical/ not Peter Leithart!] who is a friend of yours who claims he loves his wife dearly and wants to reconcile with her. But, he refuses to end his open marriage relationships with other women? You tell him as gently but as firmly as possible, “My dear friend, your commitment to your open marriage and other women is destroying any chance you have for marital Unity. You must repudiate and give up this destructive open-marriage commitment.”

Sadly, and all to similarly, Protestant hubris (old & new) seeks a ‘Unity’ centered around their own current & morphing take on sola scriptura. They do so while spurning the Unity which held together the Church through the major controversies in the first millennium until the tragic Great Schism of 1054. There is no Unity that can arise from sola scriptura’s exegetical and ecclesial autonomy. The Church (not autonomous exegesis) is the Pillar and Ground of Truth. Nor will there be any lasting unity without Her renewed centrality as the proper guardian of Scripture.

Thus, we bid our Protestant friends to do what Luther and the Reformers should have done upon leaving Rome and her errors — forsake sola scriptura and return to the One Holy Orthodox Church. Thankfully, it is far easier today than it would have been for them. Lord have mercy.

Josiah Trenham. 2015. Rock and Sand: An Orthodox Appraisal of the Protestant Reformers and Their Theology. New Rome Press.