Metropolitan Philip Saliba fell asleep in the Lord on Wednesday, March 19, 2014.  He served as the Primate of the Antiochian Orthodox Christian Archdiocese of North America from 1966 to 2014.  His bold and visionary leadership helped reshape and revitalize American Orthodoxy, and redefined Protestant-Orthodox relations.

During the 1970s, a group of Protestant Evangelicals began looking for the ancient Church.  By the mid 1980s, after years of careful study, prayer and corporate reflection, they embraced much of Orthodoxy and were calling themselves “The Evangelical Orthodox Church.” But, they sensed a need, an obligation to Christ, to become formally united with the historic Apostolic Church they saw in Scripture.  In 1987, Patriarch Ignatius IV of Antioch and Metropolitan Philip welcomed two thousand Evangelicals into the Orthodox Church.   Peter Gillquist described that historic encounter in Becoming Orthodox (pp. 147-148).

American Orthodoxy has undergone considerable change in recent years: points of contact have been made between Orthodox and Protestant Christians, and doors opened wide.  Metropolitan Philip was but one man in this broader trend. Even so, Protestants looking for the ancient Church owe him a considerable debt.  His receiving the Evangelicals sent a clear message that the Orthodox Church was open to American Protestants desiring formal connection to the Ancient Faith.  During his tenure Orthodoxy’s reputation for closed and too often unfriendly ethnocentrism diminished considerably. Churches have been planted that have all-English services and whose membership reflects the mainstream of American society.

Metropolitan Philip was a bold visionary who yearned for the evangelization of American society.

In a sermon given the Sunday following the reception of the Evangelical Orthodox Metropolitan Philip declared:

We thank God that those faithful people have found the true faith which once and for all was delivered to the saints.  This faith which remains the best kept secret in America because of our laziness.  Because we have been busy taking care of our little ethnic ghettoes.  It is time we let this light shine.  America needs the Orthodox Faith! I said to the Evangelical Orthodox this past Sunday.  I said: Welcome home!  Today I say to America: Come home America!  Come home to the faith of Peter and Paul! 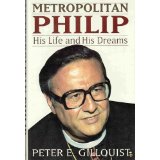