The recent Reformed resurgence has given rise to a renewed interest in the Geneva Bible.  Many people associate Protestantism with the King James Version (KJV), but the neo-Reformed enthusiasts look down on the KJV which was produced under the sponsorship of King James and the Church of England.  They prefer instead the Geneva Bible that the Puritans and Pilgrims brought to the New World.  For them the Geneva Bible represents the truer Reformed understanding of the Bible.

Knox and Calvin, as well as the other Reformers, wanted the Bible to speak for itself. The Geneva Bible fulfilled that need. It nurtured liberty of conscience and freedom of thought. A generation of men and women raised on this Bible would not tolerate tyranny in church or state.   [Emphasis added; Source: Kirk Cameron]

The Pilgrims and Puritans preferred the Geneva Bible over the King James Bible, not trusting the king’s purported good faith. The Geneva Bible was brought over on the Mayflower, and it is not an exaggeration to say that the Geneva translation and footnotes were the biblical foundation for the American Republic.    [Emphasis added; Source: Kirk Cameron]

This posting is the first of a four part review of the Geneva Bible.  For my research I relied on Harry S. Stout’s “Word and Order in Colonial New England,” which appeared in The Bible in America (1982), edited by Nathan O. Hatch and Mark A. Noll.

There is a certain irony in the claim: “Knox and Calvin, as well as the other Reformers, wanted the Bible to speak for itself,” when the Geneva Bible is famous for its extensive commentary of more than 300,000 words.  This made it a veritable a mini theology library accessible to the common readers of the time.  What we see here is an English translation of Scripture encased in the Reformed theological tradition.  This is no stand alone Bible but a Bible embedded in a specific Protestant tradition.  This is much like how Orthodoxy understands the Bible.  For Orthodoxy the Bible must not be read independently but understood in light of Apostolic Tradition.

As a study bible the Geneva Bible was not all that unusual for its time.  Luther’s German translation included theological commentary as did Olivetanus’ French translation. Prof. Harry Stout noted that what would have been unusual at the time was a popular translation without commentary.  This practice of inserting marginal notes refutes the contemporary imaginings of popular Evangelicalism of sola Scriptura: the Bible all by itself.  Keith Mathison labeled this distorted understanding: “solo Scriptura.”  As originally understood by the Reformers, sola Scriptura meant Scripture understood in light of the best exegetical tools and theological research available and unfettered by subservience to papal authority.  But this massive set of commentary notes raises the issue: Which particular theological tradition is being affixed to the Scripture text?

The Geneva Bible marked the beginning of the Protestant practice (tradition) of making study bibles.  Some of the more popular modern versions are the Scofield Study Bible and the Ryrie Study Bible, both are based on JN Darby’s dispensational school of theology.  More recently, there have appeared specialty bibles like the Charles F. Stanley Life Principles Bible and the John F. MacArthur Study Bible.   All these bibles set an interpretive commentary alongside the very text of Scripture.  This commentary is without question a tradition—a set of teachings and practices that guide and define a particular faith community.  The Protestant Reformers were not averse to the notion of tradition.  But one has to wonder about the proliferation of Protestant study bibles when they offer conflicting interpretations of the Bible. 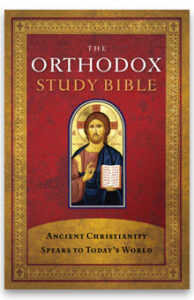 In 2008, the Orthodox Study Bible was published by Thomas Nelson.  Like the Geneva Bible, the Orthodox Study Bible has extensive commentary notes.  Where it differs is that the commentary notes draw on the early Church Fathers.  This is significant.  The early Christians were admonished to hold fast to Apostolic Tradition both in written and oral forms (2 Thessalonians 2:15), and to ensure its transmission to future generations (2 Timothy 1:13, 2:2).  This is the biblical basis for capital “T” Tradition.  Because of the early Church Fathers’ proximity to the Apostles and their commitment to the traditioning process, we can be confident that the patristic exegesis of Scripture is faithful to the Apostle’s understanding of what Scripture meant.  In contrast to this, the Geneva Bible draws on an exegetical tradition that date back to the 1500s, i.e., the Protestant Reformation.  In other words, the commentary texts of the Geneva Bible ground the reader in a theological tradition that much more recent than that of the Church Fathers.  It then becomes a question why one would prefer a four hundred year old tradition over another that is almost two thousand years old.

The Protestant principle sola Scriptura gave rise to the need for vernacular translations.  The original Reformers were able to read Scripture in Greek, Hebrew, and Latin, but they wanted to make the Bible accessible to the common people.  This quest for the vernacular arose in part to Rome’s ecclesiastical tyranny and the widespread biblical illiteracy among the laity.  Stout wrote:

At that time vernacular Bibles were still in their infancy, and ordinary people had no ready access to the Word of God in an intelligible and affordable edition.  Until that need was met, the Reformation ideal of sola Scriptura would remain just that: an ideal with no realistic prospect of implementation in a living society.  The exiles’ proposed translation, then, represented the necessary precondition for a biblical-based culture organized solely on God’s ordinances (1982:20).

This need for vernacular translations is characteristic of Western Christianity.  In the West the Bible was in a dead language, Latin, and was thus inaccessible to the vast majority of society.  In the Byzantine East significant parts of the population were still conversant in Greek.  Furthermore, Orthodoxy has a tradition of translating into the vernacular dating to the ninth century when Kyril and Methodios sought to evangelize the Slavs.

The anomaly of an English translation being named after a city situated outside England reflects the circumstances in which it originated.  The Geneva Bible was the work of Anthony Gilby and William Whittingham who fled the persecution of the pro-Catholic Queen Mary to Geneva.  There they produced an English translation, working in concert with other leading Reformed scholars of the day like Calvin and Beza.  It is important to keep in mind that at the same time other vernacular translations were being undertaken in French, Spanish, Italian, as well as English.

The first printing of the entire Geneva Bible, Old and New Testaments took place in 1576.  It became widely popular and went through some 150 editions from 1576 to 1644.  Its popularity was due not only to the clarity and vigor of style but also its extensive commentary notes. The Geneva Bible was also notable for its technical innovations.  The numbering of verses, cross referencing of verses, detailed introductions to each book, in addition to maps, woodcut illustrations, and indexes all made for a very influential and popular study bible.

The Puritans’ exclusion of the Apocrypha has had a tremendous impact on the Protestant understanding of the Bible.  The Protestant Old Testament ends with Malachi which dates to the fifth century BC resulting in a sizable gap between the Old and New Testaments.  However, the Apocrypha contains later works like Sirach which has been dated to 180 BC and 1 Maccabees which has been dated to 104 BC.  Thus, if we include the Apocrypha in the Old Testament then we find a significant reduction in the gap between the Old and New Testament periods.  If the gap between the Jewish Bible and the Christian New Testament is miniscule then one’s understanding of salvation history changes from one based on discontinuity to one based on continuity.  One becomes more open to viewing the New Testament as the extension and culmination of Old Testament salvation history.  I would conjecture that the Puritans’ exclusion of the Apocrypha may have inadvertently laid the groundwork for dispensationalism’s dichotomy between the Age of Law (Israel) and the Age of Grace (the Christian Church).

Next:  The Geneva Bible and the City on a Hill