A Letter on Syria

You have likely heard and seen much in the media about the recent tragedy taking place in Syria.  There are many calling for a military response to the atrocities committed by the Assad regime, but I would like to bring to your attention a letter to President Obama by his Eminence Metropolitan Philip that was just released.  Metropolitan Philip is the leader of the Antiochian Orthodox Christian Archdiocese of North America. 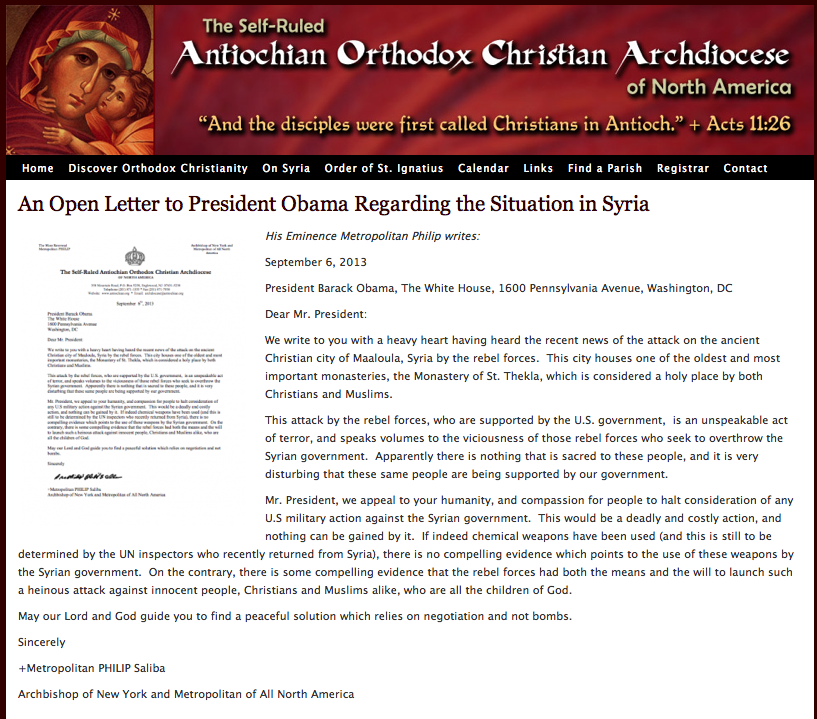 In the letter Metropolitan Philip urged restraint and caution on the part of the US. His Eminence is no stranger to the region having been born and raised in nearby Lebanon.  Syria has deep Christian roots.  The Antiochian Orthodox Patriarchate is headquartered in Damascus, the present day capital of Syria.  As an American I find it valuable to hear, not from an outsider, but from a Christian leader with deep roots in the region and who cares deeply about the region and its people.

For those of us who are US citizens, it is important that we pray for peace in the Middle East and for wisdom for our leaders.  For readers of other nationalities, Orthodox and non-Orthodox, I ask your prayers as well.  Let us all heed the words of the Apostle Paul:

I urge, then, first of all, that requests, prayers, intercession and thanksgiving be made for everyone–for kings and all those in authority, that we may live peaceful and quiet lives in all godliness and holiness.  This is good, and pleases God our Savior, who wants all men to be saved and to come to a knowledge of the truth.  (I Timothy 2:1-3)