A Calvinist Argument for Church Rituals

James K.A. Smith, professor of philosophy at Calvin College, wrote “Redeeming Ritual” which was published in The Banner (February 2012).  In the article Prof. Smith points to the beneficial results of having ritual in our lives.  He notes that while Protestants tend to shun rituals in church, they embrace rituals outside the church.  Rituals in the form of routines and disciplines are needed if we are to achieve excellence in activities like golf or playing Bach.

He draws our attention to the formative aspect of rituals:

In all of these cases we intuit that rituals are not just something that we do; they do something to us. And their formative power works on the body, not just the mind. So why should we be allergic to ritual when it comes to our spiritual life? Could we redeem ritual?

He notes that rituals do exist in Reformed worship.  Moreover, these rituals are beneficial to Reform worship.  He notes of the practice of standing during the Scripture reading and saying “Thanks be to God” at the end of the reading:

You might say it without thinking about it. But that doesn’t mean it’s not doing something. That little ritual trains your body to learn something about the authority of God’s Word, and to respond in gratitude.

He appeals to a holistic understanding of human nature.  We are “embodied beings,” not “brains-on-a-stick.”

We need not be afraid of ritual. If we appreciate that God created us as incarnate, embodied creatures, then we will recognize his grace lovingly extended to us in ways that meet us where we are: in the tangible, embodied practice of Spirit-charged rituals.

These are thoughts that an Orthodox Christian can readily agree with.  As a Protestant convert to Orthodoxy this describes well my experience of the Divine Liturgy and Orthodox prayers.  Orthodoxy is rich with elaborate, theologically profound prayers.  By repeating these prayers sincerely I was learning from the great spiritual classics of ancient Christianity.  Rituals like crossing myself and bowing gave me a sense of participation, and the sense I was taking part in the same worship as the early Christians.

Prof. James K.A. Smith’s article provides an alternative viewpoint to Pastor Doug Wilson’s claim that it is inappropriate for Protestants to make the sign of the cross.  His article shows that there are good reasons to bring back ancient rituals like the sign of the cross.  If there is a missing element to Prof. Smith’s article it is how historic rituals, as opposed to invented rituals, can connect one to the past.  Being rooted in the past and having a well grounded Christian identity is needed for spiritual maturity in today’s vertiginous religious climate.  The biggest threat today is not the empty ritualism of works based salvation but belonging to a church tradition that has become unmoored due to its disavowal of rituals and historic worship.

However, Prof. Smith is not unaware of the need for historic worship as evidenced by another article of his: “Tradition for innovation” which appeared in Faith & Leadership (June 2012). In it he argues that if evangelicals wish to minister to a broken world outside the church and engage in “culture making,” they first need to be grounded in the historic Christian worship and faith.  He writes:

In short, we cannot hope to restore the world if we are constantly reinventing the church; the hard work of innovation requires grounding in a tradition.

We cannot hope to re-create the world if we are constantly reinventing “church.” Instead, we will reinvent ourselves right out of the story. Liturgical tradition is the platform for imaginative innovation. 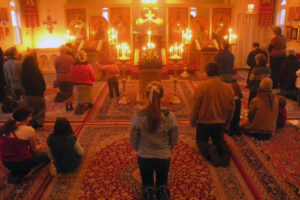 “Why all the Rituals” by Michael Bressem, Ph.D.

Evangelicals and Protestants are becoming aware that Christianity is more than just a theological system but also a worldview and a way of life.  There is a hunger for a holistic approach to being a follower of Christ and living out the Christian faith in the world.  Many have started investigating the early church fathers and the historic liturgies in an attempt to be grounded in a faith tradition that does not drift with the ebb and flow of modern culture.

They are also grappling with the fact that far from being “brains-on-a-stick,” we are embodied beings and that what we believe in our hearts needs outward bodily expression like rituals.  This explains why there is this increased interest in rituals like the sign of the cross and liturgical worship among Reformed Christians.  But sooner or later they will have to ask themselves: How far do we want to go?  Half way or all the way?  Some Protestants have gone all the way and crossed the Bosphorus.

Note: All emphasis in quotations have been inserted by me and not part of the original text.