Is the Protestant Church Fragmented? A Response to Pastor Doug Wilson (1 of 2) 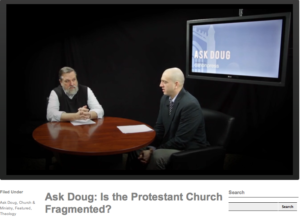 Pastor Wilson’s analysis gives one the impression that Protestants, Roman Catholics, and Orthodox are all in the same boat.  However, Pastor Wilson is confusing apples with oranges.  His 21 Protestant groupings are based on theological differences among Presbyterians, Baptists, Congregationalists, Pentecostals etc.  His 19 Orthodox groupings are based mostly on national jurisdictions, e.g., Greek Orthodoxy, Russian Orthodoxy, Bulgarian Orthodoxy etc.

Vincent Martini’s blog posting “How Many Different Orthodox Churches Are There?” in On Behalf Of All is more helpful by showing the overwhelming theological unity among Orthodox which is so sadly lacking among Protestants.  I plan to follow up in a few days looking at the striking doctrinal diversity within Protestantism and comparing that with the Orthodox Tradition. 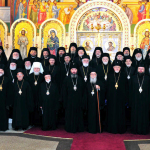 How Many Different Orthodox Churches Are There?

It has been suggested by some that a conversion from other Christian traditions to the Orthodox Church is completely unnecessary, not only because of deficiencies in doctrine, but also because of the fact that the idea of a single, cohesive, Orthodox tradition is no more than a pious myth. But is this true?

It is true that there are 14 different Orthodox patriarchates and archdioceses in the world today. Aren’t these all different traditions (or even, different churches), in the same way that Baptists are different from Presbyterians, and Pentecostals from Lutherans?

Let’s take a look at these claims more closely.

When the apostle Paul distributed his various epistles, he did so by writing to a number of different, local churches (ἐκκλησίαι). Since there were several different churches throughout the world, is it safe to assume that there has always been — and indeed, always will be — multiple, different churches? Is this the “norm” of Christian experience, as protestants and those outside of a tradition such as Roman Catholicism or Eastern Orthodoxy might claim? Or do we need to clarify what is meant by the usage of the word “church” throughout the scriptures and in Christian tradition?

Again, the apostle mentions multiple “churches,” such as “the church in Cenchrea” (Rom. 16:1), “the church of God sanctified in Christ Jesus that is in Corinth” (1 Cor. 1:2), “the Laodicean church” (Col. 4:16), and so forth. In fact, Paul’s letters to the Romans, Corinthians, Galatians, Ephesians, Philippians, Colossians, and Thessalonians are addressed to specific, local churches, with his other letters being addressed to either individuals or to the Judæan Christians in general (Epistle to the Hebrews). One might come away from this thinking that the apostle is condoning something akin to modern day protestantism, where there are multiple different churches, each with their own “take” on Christianity. However, nothing could be further from the truth.

Indeed, despite the fact that Saint Paul writes to a number of different churches throughout the Mediterranean world, the apostle continually speaks to the radical unity, communion, and similarities between them all. There are different churches for each city or region — and in some cases, multiple gatherings in a single, larger city, as with Rome — but these all constitute one, true Church, properly speaking.

As “church” is a translation of the Greek Ekklesia, it can be a reference to both the local, scattered assemblies (the “called out” ones of God), as well as the gathering as a whole; in other words, the one, true body of Christ. When the old testament refers to the theocratic assembly of Israel, the word Qahal (קהל) is used, which the Septuagint almost always translates as Ekklesia (a few times it is synagogen). There might be multiple “assemblies” of the people (multiple synagogues) throughout the diaspora, but there is only one, true Temple of the people of God (Elephantine excepted).

Going back to the apostle, then, he makes it clear on numerous occasions that, despite the many different churches, there is but one, true Church or body of Christ. The fact that the Church is scattered and organized in local, autonomous (yet conciliar, cf. Acts 15) communities does not negate this. For example, writing to the Ephesians, Saint Paul reminds them that there is “one body and one Spirit,” just as there is “one Lord, one faith, one baptism, one God and Father of all, who is over all, and through all, and in all” (Eph. 4:4-5). He is reminding them of this, so that they might “keep the unity of the Spirit in the bond of peace” (Eph. 4:3). Writing to the Corinthian church, the apostle pleads: “Now I exhort you, brothers, by the name of our Lord Jesus Christ, that you all say the same thing and there not be divisions among you, and that you be made complete in the same mind and with the same purpose” (1 Cor. 1:10). Later, he warns, “where there is jealousy and strife among you, are you not fleshly, and do you not live like unregenerate people? For whenever anyone says, ‘I am with Paul,’ and another, ‘I am with Apollos,’ are you not merely human?” (1 Cor. 3:3). By becoming factious within the churches through loyalty to one apostle or bishop over another, the Church was acting contrary to its nature; as one, unified body of Christ. Warning against the formation of schisms and “other churches,” Saint Paul continues: “For no one is able to lay another foundation than the one which is laid, which is Jesus Christ” (1 Cor. 3:11). In other words, it is impossible to form “another” church, because the foundation of the Church is Jesus Christ himself. He finally warns that to destroy the unity of the Church is to destroy “God’s temple,” and that such a destruction would result in God’s destruction of those responsible (1 Cor. 3:16-17)!

Beyond the notions of both unity and long-suffering within the one body of Christ, the apostle also indicates that there is a uniformity of both liturgical practices and doctrinal beliefs between the various churches. In one example, he warns: “We have no such custom, nor do the churches of God” (1 Cor. 11:16). While many of Saint Paul’s instructions are tailored to the specific situations in each church to which he is writing (in other words, some instructions aren’t necessarily normative for all churches), some of the liturgical instructions and “high level” doctrinal beliefs are part of a single, unified, apostolic tradition, which he in turn warns bishops (such as Timothy) to carefully guard.

Most importantly, the locus of unity between the various, local/regional churches is found in the Mystery of the Eucharist — and, in turn, in the Lord Jesus Christ himself. Writing to Corinth: “The cup of blessing which we bless, is it not a participation in the blood of Christ? The bread which we break, is it not a participation in the body of Christ? Because there is one bread, we who are many are one body, for we all share from the one bread” (1 Cor. 10:16-17). Despite the fact that there are churches in hundreds of different cities and homes throughout the world, they are all one because they all constitute the one body of Christ. Paul goes on to compare the eucharistic unity with that of the altar in the temple, as all who shared in the sacrificial meal were sharing of that one altar. It is the same for Christians, as there is only one Eucharist and only one body of Christ, despite the fact that it is celebrated in thousands of different parishes and cathedrals around the world.

Coming full circle, then, it is important that people unfamiliar with the Orthodox Church understand that, whether we are of Greece, Russia, Romania, Antioch, or Jerusalem, there is only one Orthodox Church. The 14 churches mentioned at the beginning of this post are merely regional gatherings of many different local churches (like Corinth, Galatia, and Ephesus, for example), and primarily for the sake of conciliar organization and a pooling of resources at the “local” level. The way the Orthodox Church “governs” itself today is the same way the Church operated in its earliest of days; for example, the synod of Jerusalem in Acts 15, where the church leaders from around the world gathered together in order to make various decisions, which were then disseminated to all of the churches, as from a single “voice” or “mind”.

In the Orthodox Church today, the “local” designation is typically a national one: the Church of Greece, the Russian Orthodox Church, the Bulgarian Patriarchate, the Orthodox Church in America, and so on — just as the churches in the writings of Saint Paul are designated according to their location (usually the name of a city or region). Despite the variance in both name and location, these all constitute one Church, and they are all united in doctrine, liturgy, and — most importantly — the one bread of Christ. This is a far cry from protestantism, where the thousands of different churches might agree on the “basics” of the faith and yet disagree fundamentally in thousands of other ways (and, in fact, show far less cooperation than is readily admitted). These Orthodox assemblies around the world are not different, competing churches with fundamental disagreements over the faith; rather, they are a united whole (“catholic”) that constitutes the one, true body of Christ.

The fact that there are 14 Orthodox patriarchates and/or archdioceses in the world today is not the result of schism, in-fighting, or other divisive behavior, but is rather a testimony to the continuation of these churches from the same first century Church as witnessed to in the writings of Saint Paul — of churches that are organized not by major doctrinal disagreements, charismatic leadership, or other divisive reasons, but simply by where they happen to be located. They are separated by culture, language, and geography, not by division, dissension, or schism. An Orthodox Christian in America can travel to any Orthodox church in Greece, Russia, or Serbia, experiencing the same liturgy, prayer, and piety that they are accustomed to in their “home” church, while sharing full eucharistic fellowship with every single one of them.