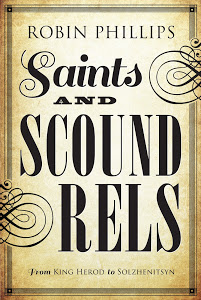 It is a distressing fact that many Protestants nowadays are ignorant or indifferent about church history.  This mindset is dangerous on several levels.  One, it in effect denies God’s role as the Creator and Sustainer of his creation.  Two, it denies that there is a moral dimension to history.  Three, it implicitly denies that God is at work redemptively giving human history purpose and meaning.  And four, it assumes a spirit/matter dualism that closely resembles the ancient heresy of Gnosticism.

It has been a pleasure interacting with Robin Phillips through this blog.  I especially appreciate his articles on Protestantism’s vulnerability to the Gnostic heresy.  He recently published Saints and Scoundrels: From King Herod to Solzhenitsyn through Canon Press.  The book seems to be written to remedy Protestantism’s historical amnesia.

A Young Boy and the Flow of History

The seed for Saints and Scoundrels was planted when as a eleven year old boy, Robin Phillips, visited the Berlin Wall.  He wrote in the Preface: 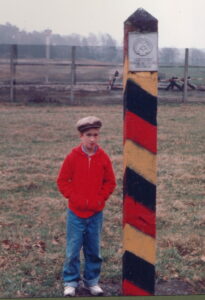 When I was eleven years old, I traveled to West Germany with my family. I will never forget the afternoon my dad drove us to the wall separating West and East Germany. The electric fence dividing the free world from the “evil empire” looked ominous.

As we emerged from the car, we were met by a chill, drizzling rain. On the other side of the fence a lone guard stared gloomily at us. The rest of my family had their picture taken in front of the fence but I was too afraid to venture near. A few minutes later I plucked up the courage and asked my dad to photograph me next to the terrible barrier, or as close to it as I dared approach.

A few years later, he saw the fall of the Berlin Wall and the end of communism. This had a profound impact on Robin Phillips. He wrote further in the Preface: 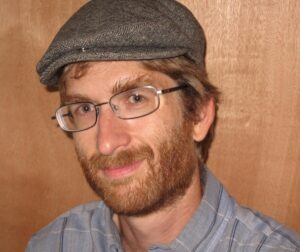 In toppling His enemies, God does not work alone but uses the faithfulness of His people throughout the ages to accomplish His purposes. From my perspective as a young boy, it seemed as though the collapse of communism had come out of the blue. Since then, I have had the opportunity to study the men and women of faith who played a part in the accomplishment of God’s plans.

We are all part of the flow of history. Some people think history is boring and irrelevant to faith in Christ, but reading Saints and Scoundrels will make us come away with an appreciation of how the moral choices people make affect the flow of history and how God exercises his sovereignty and redemptive grace in history.

Overview of Saints and Scoundrels

This book is not conventional church history.  Major historical figures like Thomas Aquinas, Martin Luther, and John Calvin are passed over.  It is, rather, a collection of biographical sketches arranged in chronological order.  As the title implies the book covers both the high and low points of Western history.

Robin Phillips is attempting to present something similar to Hebrews 11, the biblical chapter that recalls the heroes of the faith. The book aims to present a Christian worldview through positive and negative moral examples.  It also presents the Christian worldview exemplified through a wide range of vocations: theology, politics, charity, literature, drama, and cross-cultural missions.  In his Preface Phillips states: “What is just as important as defeating or converting God’s enemies is the positive work of building up the culture of Christendom (p. 13).”  To further reinforce the book’s pedagogical function at the end of each chapter is a list of discussion questions and a personal challenge question.  The book assumes that one already has a grasp of basic Christian doctrine and values.

Robin Phillips’ prose is clear and accessible to a general audience, but I was confused at times about whom his intended audience was.  The occasional bolded terms for the glossary seem to be aimed a high schoolers or first year college students.  But there are parts where Phillips presents complex ideas like cultural Marxism which is more appropriate to college students.

I wished Robin Phillips had provided an introduction and an epilogue to provide an overarching thematic unity for the book.  George Grant’s “Introduction” seems to me more of a foreword.  It would have been good if Phillips took some time to discuss the method behind his selections.  There is an implicit agenda conducted through his selections.  Nearly half of the chapters (eight out of twenty) deal with characters from England and another two from Scotland.  This is not necessarily a flaw or a weakness but it does need to be addressed openly in either the introduction or epilogue.  A parent or instructor perusing the book needs to know these things at the outset.

The selections seem to be guided by a concern for the cultivation of a Christian worldview.  The selections are at times surprising and illuminating.  As a product of modern American culture I especially benefitted from the chapters on Alfred the Great, King John, William of Orange, and J.S. Bach.  I was pleasantly surprised to find the inclusion of the Frankfurt School of critical theory.  As a product of modern liberal education I am well acquainted with this school of thought.  This is an influential school of thought that young Christians need to be prepared to deal with.  It seems to this reviewer that in selecting extremes like Jean Jacques Rousseau and Antonio Gramsci, Phillips quietly passed over moderate liberals like Thomas Jefferson and John Locke.  This gives the selections an antinomic black versus white quality that can give an unbalanced view of history.

Theologically, the book assumes an irenic “mere Christian” stance.   While Robin Phillips often took an overtly didactic tone in his biographical sketches, theological issues were handled with a light touch.  One example of the book’s didactic tone can be found in the introduction to the life of George MacDonald: “One important lesson we learn from MacDonald is that beauty was never meant to be an end in itself, but something that points us beyond the universe to God and His goodness” (p. 246).  Phillips describes Dietrich Bonhoeffer as a “highly complex thinker” and “heterodox” (p. 263).  This is very mild language that fails to alert the young reader to the liberal elements in Bonhoeffer’s theology that has upset conservative Protestants.  See Michael Hoffman’s review on Amazon.

From an ecumenical standpoint the book is biased towards Protestantism but is balanced by the inclusion other Christian traditions, e.g., Eastern Orthodox Christians like Aleksandr Solzhenitsyn.  It would have been good if someone from the Roman Catholic tradition were included in Saints and Scoundrels.  The late Pope John Paul II, who helped bring about the downfall of Communism, could have served as a complement to the Orthodox Aleksandr Solzhenitsyn.  Father Damien De Veuster is an example of a life of sacrificial service to those rejected by society.  In the 1800s the Hawaiian kingdom was predominantly Protestant (Calvinist Congregationalist), but it was a Roman Catholic missionary priest from Belgium who is remembered more than a century later for his ministry of compassion to the Hawaiians under medical quarantine due to Hansen’s disease.  He known today as Saint Damien of Molokai, a “martyr of charity.”

As an Orthodox Christian I was especially interested in what Robin Phillips had to say about Irenaeus of Lyons and Aleksandr Solzhenitsyn.  He did a good job describing how Irenaeus defended the Christian Faith against the Gnostic heresy.  He drew attention to the fact that Christian truth is public truth safeguarded by means of apostolic succession. But more attention could have been given to the fact that Irenaeus stressed the visibility and universality of Christian truth — that no matter where one went throughout the Roman Empire one would hear the same confession of faith.  Irenaeus’ emphasis on visible church unity is a necessary corrective to the widespread belief among Protestants that the true church is the invisible church and that the plurality of doctrines among Protestant denominations is tolerable. 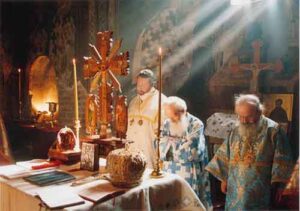 Robin Phillips noted that Aleksandr Solzhenitsyn was deeply influenced by the rhythms and rituals of Orthodox worship (p. 318).  But such a cursory description does a disservice to most Western readers who are unaware of the rich and profound nature of the Orthodox Liturgy.  Many first time visitors have commented on the deep spirituality of Orthodox worship.  There is a well known story how the pagan ruler Vladimir of the Kievan Rus sent envoys to investigate the religion of the neighboring countries.  Of the Orthodox worship at Constantinople the envoys reported: “We no longer knew whether we were in heaven or on earth, nor such beauty, and we know not how to tell of it.”  Unless the reader has a glimmer of the deep spirituality of the Orthodox Liturgy, they will not be able to understand what religion means for an Orthodox Christian like Solzhenitsyn.

The Glossary seems to be a vocabulary builder for high schoolers.  The inclusion of basic vocabulary items like “deft,” “ecclesiastical,” “ecumenical,” and “egalitarian” struck me as unnecessary as they can be easily looked up with a pocket dictionary or Googled by those with wifi connections.  Also, there were some missed opportunities.  For example, Phillips did not include important terms like: “heterodox,” “materialism,” “modernism,” “romanticism,” and “secularism.”  It is important that young Christians have a good understanding of these ideas when they enter into the intellectual marketplace of academia.

The “Bibliography and Sources” section will be useful for those who wish to do further reading.  The entries are eclectic ranging from ancient primary sources like Josephus’ Jewish Antiquities and the Jewish War, nineteenth century works like Philip Schaff’s History of the Christian Church, to modern scholarly works by major publishing houses like Cambridge University Press.  Also included are URLs to blog postings written by Phillips and others.  However, this section is not comprehensive.  A quick glance showed some major omissions, e.g., Robert M. Grant’s Irenaeus of Lyons (1997) and Eric Metaxas’ Bonhoeffer: Pastor, Martyr, Prophet, Spy (2011).  Despite these limitations the entries are suitable for the intended audience.

A widespread problem among many Christians today is the ignorance of church history and their Christian cultural heritage.  Saints and Scoundrels is recommended for Christians who wish to learn about the Western Christian heritage and those who want to strengthen their Christian worldview.  This book works best as: (1) a supplementary reading for a Christian secondary school or (2) Christian parents who want to acquaint their teenage children with a Christian approach to history, culture, and morality.

Posting:   Response to Robin Phillips — “Are Calvinists Among the Gnostics?”