Orthodox Observations on a Recent Debate Among Southern Baptists 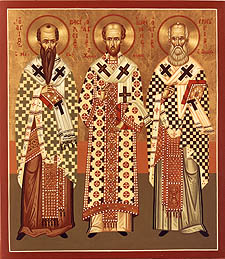 Reformed theology has been making inroads in unexpected places.  Christianity Today, in a recent article, reported on a surprising trend among Southern Baptist Convention (SBC) pastors.  A 2006 survey found that only 10 percent of SBC pastors overall identified themselves as “five-point Calvinists.”  However, a 2007 survey found that a surprising 35 percent of SBC ministers that graduated recently from SBC seminaries identified themselves as “five-point Calvinists.”

This has spurred a pushback in the form of a theological statement: “A Statement of the Traditional Southern Baptist Understanding of God’s Plan of Salvation.”

Article Two: ‘The Sinfulness of Man’ contains an explicit rejection of the Reformed doctrine of total depravity:

We deny that Adam’s sin resulted in the incapacitation of any person’s free will or rendered any person guilty before he has personally sinned.

Orthodox, however, do not hold that the fall deprived humanity entirely of God’s grace, though they would say that after the fall grace acts on humanity from the outside, not from within.  Orthodox do not say, as Calvin said, that humans after the fall were utterly depraved and incapable of good desires.  They cannot agree with Augustine, when he writes that humans are under ‘a harsh necessity’ of committing sin, and that ‘human nature was overcome by the fault into which it fell, and so came to lack freedom.  (p. 223)

What I find striking about the theological debate described in the Christianity Today article is the lack of awareness of the early church fathers.  Only one was mentioned, Augustine.  Augustine is a very well known church father but he was not the only one.  One of the weaknesses of Western Christianity is the narrow provincialism that resulted in reliance one just one theologian when there was a far richer theological heritage to drawn on.  Eastern Orthodoxy draws on a richer and broader theological tradition.  In an age of rampant hero worship, why are direct disciples of the Apostles not given the attention and respect they deserve?  I am sure there are many thoughtful and scholarly SBC pastors and seminarians who would be open to investigating what the Apostles taught their disciples.

Who are the Early Church Fathers?

Just before he was to die, the Apostle Paul wrote to Timothy:

Hold fast the pattern of sound words which you have heard from me, in faith and love which are in Christ Jesus.  That good thing which was committed to you, keep by the Holy Spirit who dwells in us.  (II Timothy 1:1-14, NKJV)

For a long time Timothy was Paul’s assistant and pupil, soon he was going to graduate becoming Paul’s successor in the ministry of gospel preaching and church planting.  For that Timothy had to be ordained or set apart to the ministry of bishop.  Paul reminds Timothy of that momentous occasion when Timothy was made bishop of the church of Christ.

And the things you have heard from me among many witnesses, commit these to faithful men who will be able to teach others also.  (II Timothy 2:2, NKJV)

The job of the bishop is different from that of a local church pastor.  A bishop inherited the authority of the apostles; he did not claim divine inspiration like the original apostles but he continued their work of shepherding the larger church.  The local pastors (priests) served under the bishops.  The bishop leads the church through the grace given by the Holy Spirit (see II Timothy 1:6).  It is also important that we keep in mind that Pentecost, Christ’s gift of the Holy Spirit to the Church, began in Acts 2 and flowed on continuously guiding the church into all truth.  As we study church history we find that Christ has been faith to his promises to the Church, never to abandon her but to faithfully uphold her in truth and grace.

It is important to keep in mind that at the time Paul was writing this letter to Timothy, there was no New Testament yet.  What Timothy and the other pastors had to rely on were the handful of letters they received from Paul, their memory of Paul’s oral teachings, and the Old Testament.  The collection of books and letters known as the New Testament would not come together until at least two centuries later.

Ignatius of Antioch – A disciple of John the Apostle, he died around the year AD 100.  Tradition has it that he was one of the children Jesus took into his arms and blessed.  Ignatius served as the third bishop of the city of Antioch, the same city that sent out Paul and Barnabas as missionaries (see Acts 13).  He wrote six letters that give valuable insights into the beliefs and practices of the Christians shortly after the original Apostles had passed on. His letters can be found in the Apostolic Fathers.

Polycarp – Another disciple of John the Apostle, he died a martyr’s death at the stake in AD 155.  Polycarp stressed the importance of memorizing and passing on the teachings of the Apostles.  The account of his martyrdom became a very early classic and can be found in the Apostolic Fathers collection.

Irenaeus of Lyons – A disciple of Polycarp, he served as bishop of Lyons in Gaul (France).  He was a missionary bishop overseeing a church on the frontiers of the Roman world.  He is well known for his Against the Heretics which he wrote to combat the heresy of Gnosticism.  He also wrote On the Apostolic Preaching.  He died around AD 202.

Athanasius the Great – He served as bishop of the city of Alexandria, one of the great cities of the Roman Empire.  He played an important role in combating the heresy of Arianism which denied the divine nature of Jesus Christ.  He wrote the well known theological classic On the Incarnation and participated in the first Ecumenical Council in AD 325.  He died in AD 373.

Basil the Great – He served as bishop of Caesarea in Cappadocia (modern day Turkey).  He wrote On the Holy Spirit against those who denied the divine nature of the Holy Spirit.  He died AD 379.

One common mistake Protestants make is to assume that because he lived long ago, Origen was an early church father and looked up to by Orthodox Christians.  His brilliant scholarship and enormous productivity in theological research would undoubtedly earn him a position in today’s leading seminaries.  But because of certain questionable aspects of his teachings, he is not recognized as a church father by Orthodox Christians.

Reading the church fathers is far from an easy task but will be rewarding for those who want to have a well grounded understanding of the Christian faith.  It is important to keep in mind that the term “church fathers” is a short hand expression for a theological movement that spanned several centuries, spanned both the eastern and western parts of the Roman Empire and even extended outside the Roman Empire.  A good starting point for those not familiar with the early church fathers is Jaroslav Pelikan’s The Christian Tradition vol. 1.

The Early Church Fathers on Free Will

When it comes to doing theology, Orthodox Christians ask: What was the general consensus of church fathers?  The early Christians did theology conservatively.  Rather than attempt to come up with a creative solution, they sought an understanding grounded in Scripture and in line with the understanding of Scripture taught by the Apostles’ successors in ministry, the bishops.

A study of the early Church shows a broad theological consensus existed that affirmed belief in free will.  J.N.D. Kelly in his Early Christian Doctrine notes that the second century Apologists unanimously believed in human free will (1960:166).

Justin Martyr is known as “The Philosopher.”  He was not part of the ordained clergy but was a teacher much in the fashion like today’s university professors.  He wrote:

For the coming into being at first was not in our own power; and in order that we may follow those things which please Him, choosing them by means of the rational faculties He has Himself endowed us with, He both persuades us and leads us to faith (First Apology 10; Ante-Nicene Fathers Vol. I, p. 165).

Now all such expression demonstrates that man is in his own power with respect to faith (Against the Heretics 4.37.2; Ante-Nicene Fathers, Vol. I p. 520).

Cyril of Jerusalem was patriarch of Jerusalem in the fourth century.  Jerusalem was one of the spiritual centers and preserver of the ancient Christian tradition.   In his famous catechetical lectures, Cyril repeatedly affirmed human free-will (Lectures 2.1-2 and 4.18, 21; Nicene and Post-Nicene Fathers, Second Series Vol. VII, pp. 8-9, 23-24).

Gregory of Nyssa, a well respected teacher in the fourth century, taught in his catechetical lectures:

For He who holds sovereignty over the universe permitted something to be subject to our own control, over which each of us alone is master.  Now this is the will: a thing that cannot be enslaved, being the power of self-determination (Gregory of Nyssa, The Great Catechism).

John of Damascus, an eighth century church father famous for his Exposition of the Catholic Faith, wrote the closest thing to a systematic theology in the early church.  He explained that God made man a rational being endowed with free-will and as a result of the Fall man’s free-will was corrupted (Nicene and Post-Nicene Fathers Series 2 Vol. IX p. 58-60).

John of the Ladder, a sixth century Desert Father, in his spiritual classic The Ladder of Divine Ascent wrote:

Of the rational beings created by Him and honoured with the dignity of free-will, some are His friends, others are His true servants, some are worthless, some are completely estranged from God, and others, though feeble creatures, are His opponents (1991:3).

What is striking is that the Calvinists’ doctrines of total deprativity and double predestination were not taught by the early church fathers.  The distinctive teachings of the Reformed tradition have their roots in Augustine of Hippo and the influence of medieval Scholasticism on Christian theology in the Middle Ages.  This points to Calvinism (Reformed theology) not being part of the historic Christian faith, but a novel theological system invented by John Calvin in the 1500s.

An Invitation to Baptists to Read the Early Church Fathers

Christians who are by temperament conservative find a certain appeal in the early church fathers.  They are repelled or disturbed by innovative doctrines that push the boundaries too far.  One of the criticisms that Orthodoxy has of Calvinism is that it teaches novel doctrines like total depravity and double predestination.  What John Calvin and his supporters did was to take certain ideas taught by Augustine and push the boundaries of these teachings in unexpected directions reaching unprecedented conclusions.

Many Protestants, including Baptists, have long been unaware of the rich heritage in the early church.  This is probably due to the mistaken belief that there took place a massive apostasy early on and that the Christian religion fell into deep spiritual darkness until the Protestant Reformation.  Ralph Winter has labeled this view: the Blinked Off/ Blinked On or BOBO theory of history.  The leading scholars in church history reject this view of church history.  The BOBO theory of church history also contains disturbing theological implications.

See also: “Why Do the Baptists Rage?” by Vincent Martini in On Behalf of All (19 June 2012).  This blog posting is written by a former Southern Baptist seminarian who converted to Eastern Orthodoxy.  It provides an insightful analysis of the implications involved in this emergent controversy.

“Southern Baptist or Semi-Pelagian” by Doug Beaumont in Soul Device (19 June 2012).  Written by an open minded Baptist seminary professor, this article has a pingback to an OrthodoxBridge blog posting.

“From First Baptist to the First Century” by Clark Carlton a former Southern Baptist seminarian who converted to Orthodoxy.  This is his personal story of his journey to Orthodoxy.