Early Evidence for the Veneration of the Saints 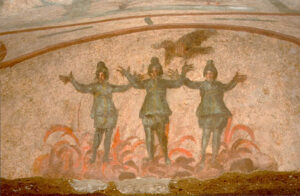 On November 2nd, John the “Lurker” wrote a brief comment noting that it was incumbent on both the Orthodox and the Reformed Christians to present evidence in support of their respective positions.  Given the brevity of his comment, I will be presenting John’s comment in italics with my responses following.

If Wesley needs to “how the Protestant soli deo gloria is not a theological novelty but part of the historic Christian faith in the first millennium” isn’t it just as important for the Orthodox to do so as well? There aren’t very many pieces of evidence from the first century about prayer to the saints or the veneration of the Theotokos. And reference to the ambiguous phrase “communion of the saints” doesn’t seem to be adequate evidence in favor of the particular interpretation that you, Robert, are arguing for. I read the post already, though not immediately before posting this, so I don’t recall any supporting evidence besides “communion of the saints” that is referenced from, say a document from an ECF. If I’m just blind, please correct me where in the above post you mention it. While an Orthodox Christian might nod his head in agreement with your interpretation of that phrase, is it possible that a Reformed Christian could affirm an alternate interpretation.

Early Veneration of the Saints

Regarding your assertion: there aren’t many pieces of evidence from the first century about prayer to the saints or the veneration of the Theotokos, I would say that while not abundant, there is evidence from the very early period, possibly as early as the first century.  It is important to keep in mind that the Apostolic Tradition, while it has roots going back to the first century, developed over time taking on a more elaborated form from its simpler precedents.  It is also important to keep in mind that we are talking about a grass roots devotional practice, not a theological system like Gnosticism which generates a significant paper trail.  Still there are multiple sources that support the Orthodox understanding of the veneration the saints.

Philip Schaff in History of the Christian Church Vol. II  §27  noted that the early catacombs contained inscriptions where the departed are asked to pray for their living relatives (p. 83).  What is interesting is a letter from the Church of Smyrna dated AD 155:

Him indeed we adore (προσκυνουμεν) as the Son of God; but the martyrs we love as they deserve (αγαπωμεν αξιως), for their surpassing love to their King and Master, as we wish also to be their companions and fellow-disciples (pp. 82-83). 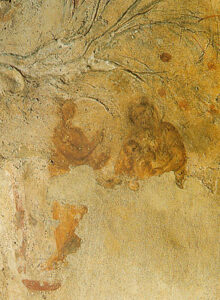 The Christian catacombs with religious images and symbols in Rome have been dated back to the late second century.  One of them contains a fresco that depicts the Virgin with the Child on her knees and a picture of a prophet pointing at them.  This is not a simple mother and child picture but rather a powerful witness to the Incarnation as the fulfillment of Old Testament prophecies and Mary as the Second Eve.

Gregory Dix in his magisterial The Shape of the Liturgy noted that it was the practice of the early Christians’ to seek the intercession of the saints:

…but invocations of christian saints who had been Hippolytus’ contemporaries in life have been found on the walls of S. Callistus, which there is good reason to think were scratched there very soon after their burial (p. 346)

Another evidence for the early Christians asking the intercession can be found in Hippolytucs’ commentary on the prayer addressed to the Three Youths mentioned in Daniel:

O Ananias, Azarias, and Misael, bless ye the Lord; O ye apostles, prophets, and martyrs of the Lord, Bless ye the Lord: praise Him, and exalt Him above all, forever.  (Ante-Nicene Fathers Vol. V p. 190)

An interesting journal article was written by David Frankfurter: “The Cult of the Martyrs in Egypt Before Constantine: The Evidence of the Coptic Apocalypse of Elijah” in Vigilaeae Christianae 48 (1994): 25-47.  This suggests not only the antiquity but also the catholicity of this practice.

Gregory Dix also noted the eagerness with which the early Christians gathered Polycarp’s relics right after his martyrdom.  Then he notes:

Nothing could better illustrate the unprimitive character of much in protestant polemic against the cultus of the saints and their relics which was sincerely put forward in the sixteenth century as a return to genuine ‘apostolic’ christianity than the unaffected religious reverence with which his disciples forthwith treated the body and the memory of this last survivor of the apostolic age (pp. 343-3444).

This comment about Protestantism’s “unprimitive character” is Dix’s indirect way of criticizing the novel character of Protestant theology.

Regarding your suggesting that the phrase “communion of saints” is ambiguous and subject to multiple readings, I would say that the scholarly consensus does not support your position.  The Evangelical Dictionary of Theology has this:

The traditional, and probably the best, interpretation refers the phrase to the union of all believers, living or dead, in Christ, stressing their common life in Christ and their sharing of all the blessings of God.

You made a good point when you asserted that it was important for both sides to present evidence that shows that their position on the veneration of saints is supported by the practice and teachings of the early church.  I’ve presented here the evidence in support of the Orthodox position, I look forward to what the Protestants can find from the early church.