Where’s the Beauty? The Absence of Art in Reformed Theology 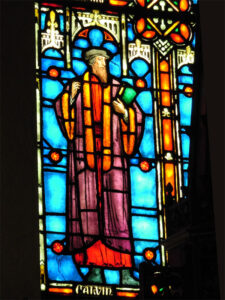 The Tipsy Teetotaler in a recent blog posting “Calvinist Concessions galore” featured Fuller Seminary professor William Dyrness‘ comments about the relation of arts to Reformed theology.  One striking feature of Reformed Christianity is its puritanical austerity, especially with respect to the visual arts.  That is why stained glass images like the one featured here are so striking.  (Actually, it’s in the Lutheran Church of the Reformation in Washington D.C.)  So rarely are visual arts found in Reformed churches.

Dyrness has done quite a bit of thinking and reflecting on creativity and aesthetics.  This makes him quite unusual among Reformed theologians.  In a recent interview on Mars Hill Audio Journal Dyrness makes a number of observations about certain problem areas in Reformed theology:

These are pretty strong indictments coming from a Presbyterian minister teaching at a major Evangelical seminary.  While Reformed Christians have engaged in the arts, these endeavors seem to be relegated to outside the church.  Thus, for most part Reformed churches and services are marked by a stark austerity that frames the preaching of Scripture.

Dyrness has attempted to address this issue through a number of books:

Poetic Theology: God and the Poetics of Everyday Life (2011)

Another way Reformed Christians can remedy the absence of the arts is through the exploration of the way Eastern Orthodoxy has incorporated the arts into the Liturgy.  A visit to an Orthodox Liturgy will forever change one’s understanding of what worship is.  Come and see!

Note: The beautiful stained glass image of John Calvin was copied from from Stock Photo Showcase.