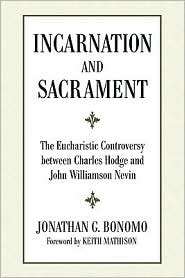 In 2010, Jonathan Bonomo published his Gordon-Conwell Theological Seminary M.A. thesis under the title: Incarnation and Sacrament.  The book’s small size (135 pages including references) belies its significance for Reformed theology and interfaith dialogue with Eastern Orthodoxy.  A number of well known Reformed theologians spoke highly of the book: Gabriel Fackre, Michael Horton, Peter Leithart, and Richard Lints.  The foreword was written by Keith Mathison.

In this review I will sketch out: (1) the controversy between Hodge and Nevin, (2) Bonomo’s exploration of the differences between the two theologians, and (3) how Bonomo’s book can facilitate Reformed-Eastern Orthodox dialogue.

The Controversy: Hodge vs. Nevin 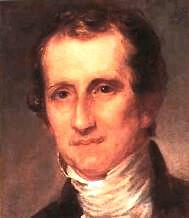 In the mid 1800s, a major controversy broke out between two major Reformed theologians: Charles Hodge of Princeton Theological Seminary and John Nevin of the German Reformed Seminary in Mercersburg, Pennsylvania.

The controversy began when Nevin published the Mystical Presence in 1846 in which he argued that Calvin and the early Reformers taught the real presence in the Lord’s Supper.  In short, Nevin was saying that the widely held symbolic understanding of the Lord’s Supper was Zwinglian and not at all Reformed. 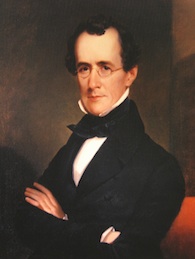 Charles Hodge countered with a defense of the symbolic understanding of the Lord’s Supper.  Nevin responded with a lengthy rebuttal to which Hodge made no reply.  Hodge’s mute silence represents a defeat on the battlefield of theological debate, but in the long run Hodge won the war because his symbolic understanding came to be the prevailing view among Reformed Christians and Evangelicals in America.

Both Hodge and Nevin belonged to the Reformed tradition yet they had radically disparate understandings of the Christian faith.  Bonomo’s book brings to light the cultural and intellectual forces that shaped their respective theologies.  He points to the significant influence of Scottish Commonsense Realism on Hodge’s individualistic and rationalistic thinking (Note 3, p. 6; Note 10, p. 38).  Furthermore, he takes note of the nominalism that shaped Hodge’s anthropology, and led him to adopt an overtly federalist theological system and a forensic understanding of salvation (pp. 10-13).  By exploring the differences between the two theologians, Bonomo brings to light assumptions long taken for granted by Reformed Christians and Evangelicals in America.  What becomes evident is that their beliefs and practices are more American than Reformed.

The Incarnation was another area where Hodge and Nevin differed.  For Nevin, the Incarnation was not just an individual event but God entering into the life of the human race (p. 71).  Because Christ was the Second Adam salvation meant not just the imputation of Christ’s righteousness but also the impartation of Christ’s life (p. 78).  Where for Hodge the locus of salvation was the Cross, for Nevin it was the Incarnation.  Not unexpectedly, Hodge disagreed (pp. 89-90).  Nevin’s understanding of a universal humanity flew in the face of Hodge’s nominalist philosophy (pp. 113-114).  This difference led to quite different understandings of the church.  Where Hodge understood the church to be an aggregation of individuals who believed in Christ, Nevin understood the church to be a group of individuals who shared a common life through union with Christ.  The latter view is much closer to that held by the early Church Fathers.

Bonomo laments that American Protestantism even now continues to suffer from “historical amnesia” (p. xvi).  His and Nevin’s attempts to study the original sources of Reformed theology and the early Church Fathers represent an attempt to break free of this amnesia.  This marks a promising development.  As Reformed Christians become familiar with the early Church, the Ecumenical Councils, and the Church Fathers they will find common ground with Eastern Orthodox Christians.

Recent Orthodox apologetics have criticized the forensic understanding of salvation.  Bonomo’s book shows that ironically what is being criticized is a deviant form of Reformed theology.  An open minded reading of Calvin’s Institutes shows that he has much to say about our mystical union with Christ; this is a theme that echo the early Church Fathers.  In other words, the gap between Reformed Christianity and Eastern Orthodoxy may not be as wide as commonly assumed.

Bonomo does the Reformed tradition a service by bringing attention to Mercersburg Theology, a little known but highly significant expression of Reformed theology.  He is part of a recent trend among Reformed Christians, e.g., Keith Mathison and W. Bradford Littlejohn.  The question whether or not Mercersburg Theology can effectively bridge the gap between Reformed Christianity and Orthodoxy will be addressed in a future posting on this blog.

In closing, Bonomo’s book shows that Reformed theology is much more complex and diverse than many have assumed it to be.  What many assume to be Reformed theology is a modernized and Americanized adaptation.  This means that many Reformed Christians need to take another closer look at the sources for their Reformed theology.  There are indications that Calvin’s theology was much closer to Eastern Orthodoxy than that of his modern day followers.  Bonomo does a great service by providing Reformed Christians with the tools for a critical reassessment of their belief systems.  He also helps remove obstacles that impede Reformed-Orthodox dialogue.  For these reasons Bonomo’s book is highly recommended.