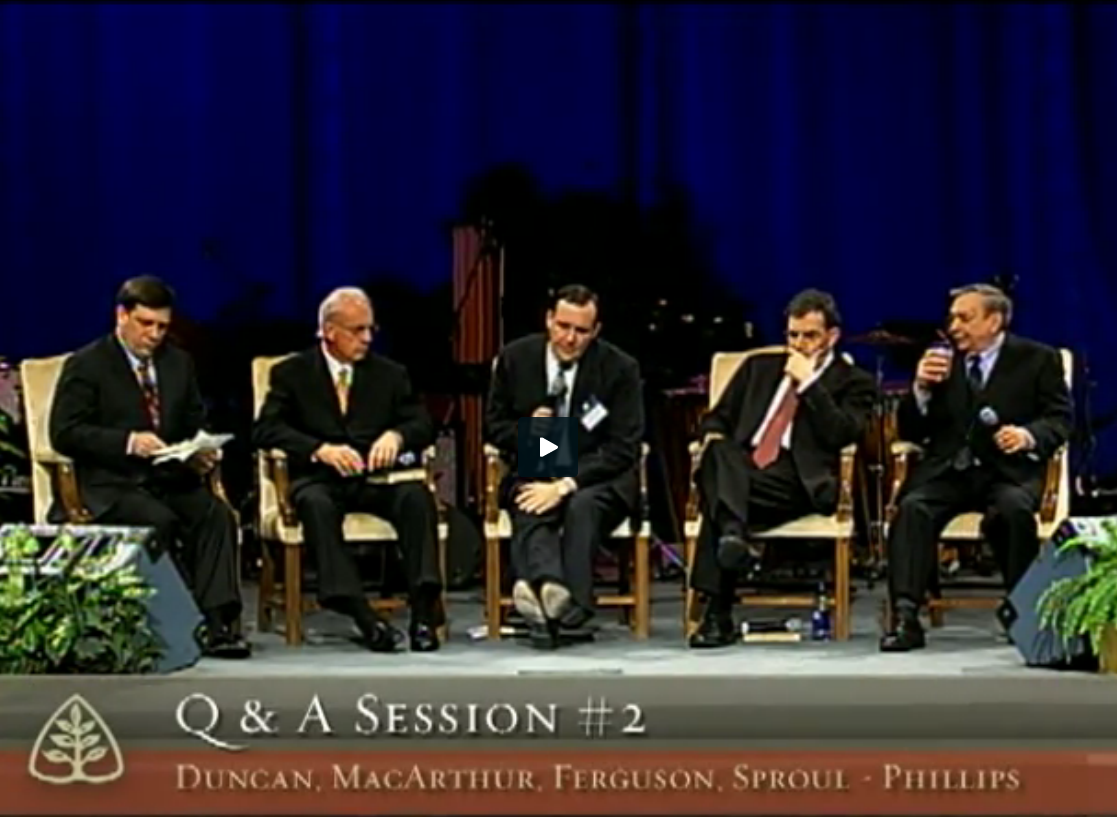 After years of obscurity on the American religious landscape, Eastern Orthodoxy is beginning to catch the attention to Evangelical leaders.  In 2004, Ligonier Ministries sponsored a national conference “A Portrait of God” which featured: J. Ligon Duncan III, R.C. Sproul and John MacArthur.  At one of the Q&A sessions, the moderator noted that he had received several questions about Eastern Orthodoxy.

There are two systems of salvation: the sacerdotal system and the evangelical system.

Sacerdotal doctrine of salvation is based upon the dispensation of sacraments by the church.

Evangelical system of salvation acknowledges the work of the Holy Spirit in the life of the sinner, drawing the sinner to Christ, uniting him to Christ by faith.

Its system of salvation similar to Roman Catholicism in terms of the function of the sacraments.  Eastern Orthodoxy clearly fits into the category of sacerdotalism.

The key error here is the separation of the two key dimensions of our salvation in Christ: the sacraments and the inner response of faith.  The Orthodox Church believe that both are needed for our salvation in Christ.  The Orthodox Church teaches that the sacraments are efficacious because of the Holy Spirit’s presence and because the Holy Spirit is at work in our hearts bringing forth a faith response.  God initiates and we respond to God’s mercy by faith.  We also believe that God works invisibly in our hearts as well as outwardly through material elements like bread, wine, water.

There was no such dichotomization of salvation in the early Church.  This dichotomization was the result of the controversy between Roman Catholic and the Protestant Reformers in the 1500s.  It has led Pastor Duncan into the trap of thinking either you are Roman Catholic or you must be Protestant Evangelical.  Orthodoxy is neither.  There is a strong emphasis on the work of the Holy Spirit in the Orthodox Liturgy: (1) the priest prays for the Holy Spirit to come down upon the bread and the wine, and (2) the faithful before going up to receive Holy Communion prays: “I believe, O Lord, and I confess that you are truly the Christ, the Son of God, who came into the world to save sinners of whom I am the greatest.”

Some branches of Orthodoxy still stress the doctrine of theosis or deification.

Response: Theosis has been one doctrine that usually gets the attention of Reformed Christians.  This Eastern Orthodox teaching is so radically at odds with the Reformed theological paradigm.  Where Calvinism assumes a transcendent deity who saves us by means of a legal transaction carried out by Christ’s death on the cross, the emphasis in Orthodox theology has been the Son of God taking on human nature and by his life, death, and resurrection he redeems and restores our fallen humanity.

The first point that needs to be made is that theosis is integral to the teachings of the Orthodox Church.  It is a mistake to say that it is held by some Orthodox, implying that it is not held by other branches of Orthodoxy.  All Orthodox Christians hold to the doctrine of theosis, but the core of the Orthodox teaching on salvation is Jesus Christ the Incarnate Son of God.

The second point is that the Orthodox teaching on theosis is biblical.  It is taught in II Peter 1:4:

Through these he has given us his very great and precious promises, so that through them you may participate in the divine nature and escape the corruption in the world caused by evil desires (NIV, emphasis added).

While II Peter may be the most widely used proof text to support the doctrine of theosis, it can also be found in other parts of the New Testament.  A similar line of thought can be found in I John 3:3:

But we know that when he appears, we shall be like him, for we shall be see him as he is (NIV, emphasis added).

Paul likewise teach about our ultimate transformation into the likeness of Christ in Romans 8:29:

For those God foreknew he also predestined to be conformed to the likeness of his Son, that he might be the firstborn among many brothers (NIV, emphasis added).

The fact that the apostles Peter, John, and Paul all taught theosis shows that this Orthodox teaching has a solid biblical basis.

Pastor Duncan is mistaken when he claims that theosis was the result of fourteenth century theologians misreading fifth to eighth century Church Fathers.  Athanasius the Great, respected by Evangelicals for his defense of the deity of Christ, taught the doctrine of theosis.  He was born in the third century and lived of his life in the fourth century, much earlier than Duncan implied.  In his theological classic On the Incarnation (§ 54), Athanasius wrote: He, indeed, assumed humanity that we might become God.  Basil the Great described the human person as a creature who has received the order to “become a god.”  These teachings are based upon Genesis 1:26 which teaches that humanity was created in the image of God.  We do not become God by nature, rather we become like God by grace; we share in the life, love, and glory that the Son has with the Father (John 17).

Eastern Orthodoxy never had a Council of Trent.  It has been Olympian and aloof from the Protestant Reformation.

Eastern Orthodoxy did not anathematize justification by faith alone.

Response: Actually, the above statements are wrong.  In the early 1600s, the Patriarch of Constantinople, Cyril Lucaris, was deposed for his Calvinist beliefs and a council was convened in Jerusalem which drafted a creed — the Confessions of Dositheus — which rejected the teachings of Calvinism.  See John Leith’s (ed.) Creeds of the Churches (pp. 485-517).  Decree XIII articulates the Orthodox Church’s position on the Protestant doctrine of sola fide:

Thus, Orthodox Christians believe in justification through faith in Christ.  But it does not accept the idea of “faith alone.”  Faith in Christ is not abstract nor is it disembodied, but rather faith is expressed through our confession of faith in Christ and our participation in the sacraments established by Christ.  That Eastern Orthodoxy is evangelical in belief can be seen in Decree VIII of the Confessions of Dositheus:

We believe our Lord Jesus Christ to be the only mediator, and that in giving Himself a ransom for all He hath through His own Blood made a reconciliation between God and man, and that Himself having a care for His own is advocate and propitiation for our sins.

Error #3 — Eastern Orthodoxy is not all that focused on, interested in doctrine.  The focus is more on the liturgy.  (R.C. Sproul)

There has been such a stripping of the aesthetic element from worship in Evangelicalism.  Beauty has been vanquished from our worship. That is why so many Evangelicals find Orthodoxy attractive.  So many people hunger and thirst for an aesthetic approach to the majesty of God which they find in Eastern Orthodox Churches.

No one said anything, no teaching, no preaching; which supports the idea that there’s essentially no theology.  This is sacerdotalism plus nothing!

Response: Oftentimes when we visit other cultures, we misunderstand them because we expect them to be like us.  Instead, we need to first seek to understand their practices on their own grounds and then compare it against ours before we can evaluate their beliefs and practices.

The complaint that there was no book table or tracts table is ridiculous.  These are very recent and American Evangelical inventions.  It is not appropriate to expect to find these inventions in a church far removed from the USA.  Many Orthodox churches in the US do have a book table or tracts table.  The Orthodox church I attend has a tract rack by the entrance and a bookstore.

Pastor MacArthur’s complaint that there was only “chanting, and more chanting” and therefore no theology in the Orthodox Liturgy shows his ethnocentric imposing Protestant assumptions on Orthodox worship.  It assumes that doctrine is only found in the sermon and that singing is mostly emotional expression.  One of the tragic consequences of the Protestant Reformation has been splitting off of doctrine from worship.  Protestantism does theology in prose, not in song.  Orthodoxy like the early Church has kept together doctrine and worship.

Orthodox Liturgy is full of theology.  Every litany concludes with a prayer to the Trinity.  At every Sunday Liturgy is sung the ancient hymn, Only Begotten (Monogenes) which teaches Christ’s incarnation and his crucifixion for our salvation, and his being one of the Holy Trinity.  At every Liturgy the Nicene Creed is recited.  If that is not doctrinal, I don’t know what is!  And just before the priest recites Christ’s words of institution over the bread and the wine, the Orthodox priest recites a paraphrase of John 3:16: “You so loved Your world as to give Your only-begotten Son, that whoever believes in Him should not perish but have eternal life.”  Therefore, to say that there is no doctrine in the Orthodox Liturgy is just wrong.  As a first time visitor John MacArthur didn’t know what to look for in Orthodox worship.  Orthodox worship is so radically different from Evangelical worship because Evangelicalism has moved so far away from the historic Christian worship.

One, the Orthodox understanding of salvation is far removed from the sacerdotalism of Roman Catholicism and has an evangelical emphasis on God’s grace and mercy in Jesus Christ.  Salvation in the early Church was both sacramental and evangelical; faith in Christ was necessary in order for God’s grace to be received through the sacraments.  Where the Orthodox Church has retained this unity, Protestant churches have split them apart.  The Orthodox approach to salvation is based upon Christ’s Incarnation; Reformed theology has resulted in a disembodied gospel message that calls for a pure faith shorn of an external response.

Two, every Orthodox Liturgy is filled with references to fundamental doctrines: creation, the fall, our need for salvation, the Incarnation, Christ’s death on the cross for our salvation, his resurrection, justification, sanctification, the second coming, the final judgment, Trinity.  Where Calvinism does theology in prose, Orthodoxy does theology in prose and song.  Orthodox worship is holistic; we worship God with mind, heart, and body.

Three, the stripping of beauty from Reformed worship, the neglect of liturgy and the sacraments, and the reduction of faith into philosophical systems all reflect the price Calvinists have paid in their reaction to medieval Roman Catholicism.  Reformed Christians need not be afraid of Eastern Orthodoxy because it has retained the rich heritage of the early Church.  Once they clear away the misunderstandings and false assumptions Calvinists will discover that Eastern Orthodoxy is genuinely evangelical in its beliefs and worship.